A snapshot of the Taobao.com, the main platform for the November 11 shopping festival. (Photos: Yang Chuchu/People's Daily)

Chinese people are counting down to the once-in-a-year shopping extravaganza on November 11.

The shopping festival is expected to set new highs this year despite mounting concerns over shoddy products, false advertising and package pollution among consumers both at home and abroad.

The festival is called Singles' Day or Double-11 Day, a holiday which began on the campus of Nanjing University in 1993 for unmarried people to celebrate their unmarried status.

In 2008, Chinese e-commerce giant Alibaba transformed it into a shopping festival by offering heavy discounts. It has since become the world's largest single-day shopping extravaganza, surpassing similar festivals in foreign countries, such as Cyber Monday and Black Friday in the US.

According to media reports, this year's sales volume is expected to reach $22.79 billion with more international brands and foreigners taking part in the event.

The promotional activites of the November 11 shopping festival at a shopping mall in Chaoyang District of Beijing. 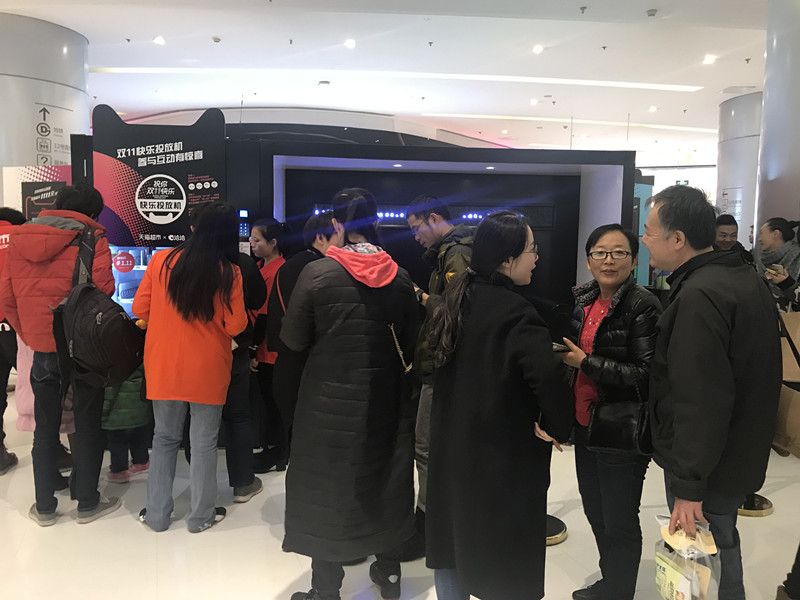 People stand in queue at a shopping mall in Chaoyang District of Beijing on November 4.

Numerous retail platforms will focus more on brick-and-mortar sales than online engagement in the past years. JD.com, a major Chinese online retailer, announced on October 17 that it would cooperate with China's largest technology firm Tencent for retail solutions online and offline integration for offline brands, to enhance the offline participation and attract more potential customers.

However, the festival's rising popularity has also raised concerns. Shoddy products for one. Shopping online means customers, especially foreign customers, have no chance to inspect the products before buying, thus increasing the risk of buying fake products. Data released by China's E-commerce Research Center shows customers' complaints reached a peak in the month after November 11, and Chinese e-commerce customer complaints increased by 14.78 percent in 2016 compared to the previous year. Product quality was among the major complaints.

False advertising is another problem. In the past, some merchants, taking advantage of a lack of price tracking on retail platforms, raised prices before the festival and then lowered prices on November 11, inducing customers to buy their products with fake discounts. Many complained about this.

A surge in online shopping also means a surge in express delivery volume, hence package pollution. A report released by Nielsen and AliResearch said over a billion parcels are expected from this year's shopping festival.

How to deal with the consequential package rubbish is a Gordian knot. Without proper solutions, package pollution will overshadow the shopping extravaganza and put heavy pressure on environmental protection.

Fortunately, the Chinese government does not sit idly to these problems, which not only damage consumer rights and interests but also tarnishes the image of China-made products.

Nevertheless, more efforts need to be done, such as drafting new laws to regulate online pricing and to enhance online merchants' credibility.

In the long run, joint efforts of governments, online platforms, retailers and customers are needed for the festival's healthy development while reducing its drawbacks.