Shutdown shows chink in US governance 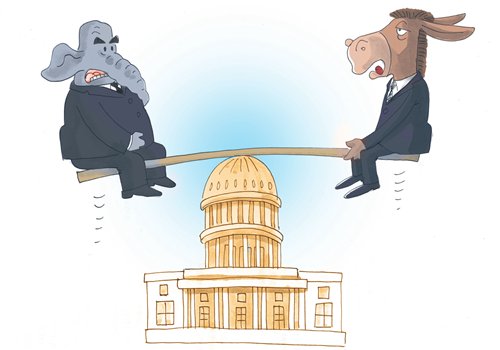 A spending legislation, known as continuing resolution, failed passage in the US Congress, leading to the official shutdown of the nation's federal government from Saturday to Monday. Since the US budget for fiscal year 2016-17 ended on September 30, Republicans and Democrats have not yet reached consensus over a new budget plan. The Congress later passed a temporary agreement over stopgap funding measures for three times to avoid a government shutdown. This time, the major disagreement between the GOP and the Democratic Party is over putting the Deferred Action for Childhood Arrivals (DACA) into the budget deal. US President Donald Trump ended the program in September last year, upsetting Democrats who have recently disrupted the GOP's efforts to keep the government functioning through Minority Rights in the Congress.In October 2013, the government was closed for 16 days, throwing 800,000 government employees temporarily out of work. The government shutdown this time can be called an escalation of political polarization in the US since last time. On the first day of the shutdown, the GOP and the Democratic Party did not consider it important to break the deadlock, but were busy playing the blame game. Democrats hope to make an impression that the government under Trump cannot function and push the Republican Party into a compromise. The Republicans, meanwhile, are pointing an accusing finger at Democrats, stressing that it is their selfishness and ignorance of national interests that led to the stalemate, so that when the effect of the shutdown starts showing, the public will start blaming Democrats for not being cooperative. Trump also has his own calculations. He is emphasizing that he is the victim of a witch hunt by Democrats in order to rally his base of supporters. Perhaps drawing from the experience of the government shutdown last time, the Republicans and Democrats compromised to reach a temporary solution. The Democrats agreed to adopt a measure that would fund the federal government for another three weeks, and the Republicans promised to discuss the DACA program.Ironically, the two parties cooperated to end the three-day government shutdown at an unprecedented speed, but they did not actually solve the problem.Government shutdown in the US is not a rare political phenomenon. According to media reports, there have been 18 shutdowns since 1976. But the latest one is not an isolated incident. For the US, it is an unfortunate time. For both parties, it's a war without winner. The protracted political struggles between the Republican and Democratic parties have seeped into the political fabric of the US, making Americans doubt the strength of the country's democratic system. What's worse, there seems to be no solution for the moment. When the government was shut down in 2013, US citizens still believed in the tenacity and stability of the democratic system. Yet, five years later, their confidence is largely shaken. Disenchantment is spreading. People are disappointed with the status quo, dissatisfied with Washington, rallying against globalization, breeding populism and nationalism and as a result directly sent Trump to the Oval Office. However, after Trump assumed power, he has not brought about changes, but exacerbated social rifts. Trump's tweet on Saturday took a dig at Democrats, "This is the One Year Anniversary of my Presidency and the Democrats wanted to give me a nice present." On the surface, this political wrangling is about the Republicans only paying lip service in exchange of the compromise of Democrats. Nonetheless, Trump can hardly get rid of the sensitive issue of immigration. In the following three weeks, the negotiations between the two parties are the key. Once there is no solution to the DACA program that could satisfy both sides, a political stalemate may reoccur. Since taking office, Trump did accomplish some major tasks, including abolishing Obamacare, promoting tax reform, appointing a Supreme Court justice, maintaining economic growth and optimism in the stock market, lowering unemployment rates, carrying out the withdrawal doctrine, playing a more decisive role in Syria, and visiting countries in the Asia-Pacific, the Middle East and Europe. Trump's performance in the first year of his presidency is not bad if harsh US domestic and international public opinion is taken into account. However, the political logjam because of the government shutdown will cast a shadow over his next year in the White House. The path ahead of him is full of difficulties, especially as midterm elections are planned for November.