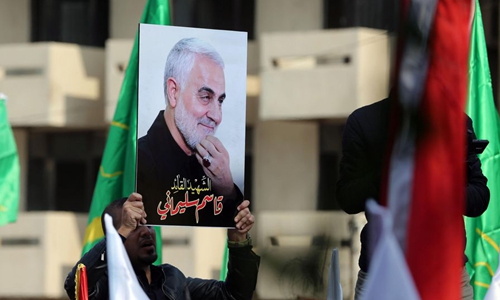 The clampdown against online posts supporting slain Iranian major general Qasem Soleimani shows that global social media giants, which are supposed to be objective, are a political tool to meet US interests and political hegemony, Chinese analysts.

Instagram and parent company Facebook attracted criticism last weekend for shutting down posts on its platforms that support Soleimani, CNN reported on Saturday.

This was not the first time that posts related to Iran and Soleimani were restricted on social media.

"This once again proves that social media in the US are politically motivated and they promote values of 'freedom and democracy' only to gain the support of the US government to open up other countries' markets," Shen Yi, director of the research center for cyberspace governance at Fudan University in Shanghai, told the Global Times.

"If they really stick to those values, they should refuse to comply with the US government to castrate pro-Soleimani voices."

Khamenei's Twitter has reportedly been suspended after Iran admitted to shooting down the Ukrainian plane on Saturday, Iranian media reported.

In August, Twitter suspended thousands of accounts that voiced support for the Hong Kong police and called for an end to violence and riots.

Twitter alleged the posts were associated with the Chinese government.

In July, the official Twitter account of the Russian Embassy in Syria was blocked for criticizing the "White Helmets" or Syrian Civil Defense group.

The Russian foreign ministry asked Twitter to resolve the issue as soon as possible, calling it a serious violation of freedom of expression.

What the US was doing was in fact violating so-called universal values like free speech and democracy that it preached and showing that the US is actually kidnapping those values to serve its international interests, Shen said.

"This poses an immediate threat to freedom of information in Iran," the International Federation of Journalists said in response.

"They say it's to comply with US sanctions, but how do posts violate sanctions?" tweeted Ben Norton, assistant editor of independent news website the Grayzone.

Twitter user asktoconsider posted at CNN, "Would Instagram and Facebook remove Trump's, his supporters' and foreign governments' disinformation and racist lies to comply with most of the people's wishes and preserve democracy?"

"Thankful I don't have Fakebook and Insaneogram," replied Yoruba Women.