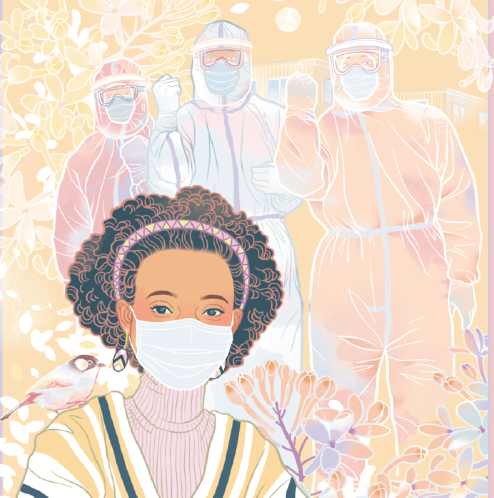 No matter in happiness or in sadness, Tanzania and China will resolutely stand together

The novel coronavirus pandemic has led the world into a war against an invisible enemy. The Chinese and Tanzanian people are helping each other and are jointly writing a song of friendship during this challenging time.

After the outbreak of the virus in China, the Tanzanian government and people immediately expressed their support for China's anti-epidemic efforts.

President Joseph Pombe Magufuli, Prime Minister Kassim Majaliwa, General Secretary of the ruling party Chama Cha Mapinduzi (CCM) Bashiru Ally and other Tanzanian leaders sent letters of condolence to China, in which they conveyed their appreciation for China's hard work in protecting people's lives and efforts to prevent the spread of the virus, and their firm belief that China would win the battle. President Magufuli personally wrote a letter to President Xi Jinping and said to me that Tanzania will stand firmly with China in good times and bad. "As long as China is in need, we can send doctors to China to fight against the epidemic at any time." In addition, dignitaries of Tanzania, including former prime minister Mizengo Pinda, Foreign Minister Palamagamba Kabudi, Health Minister Ummy Mwalimu and Chief Government Spokesman Hassan Abbas, sent letters and recorded videos to convey their support for China's fight against the epidemic and their confidence in its success.

Civil organizations and people from all walks of life in Tanzania have also contributed. The Tanzania-China Friendship Association and the Tanzanian Overseas Students Union in China sent letters to the embassy to cheer on the Chinese people who had fought against the epidemic. Tanzanian friends have sent letters to the embassy and left messages at the embassy's twitter every day. Among them, there are doctors and nurses who volunteered to work in China, the Tanzanian citizens in China who expressed their appreciation to the Chinese government for the good care they were receiving, and college students who wrote "Stay strong, China. Stay strong, Wuhan. We are together" in Chinese. Their touching words, part of a warm stream, reflect the solid foundation of China-Tanzanian friendship.

From the very beginning, China resolutely shouldered the responsibility of safeguarding global public health security. On the one hand, seeking to "prevent domestic expansion" and trying to guarantee Chinese people's safety.

On the other hand, striving to "prevent virus exportation" by building a virus control system to stop it being exported to other places. Domestically, China has abolished all outbound tourist groups and imposed strict inspections at all departure ports across the country. In Tanzania, the Chinese embassy promptly informed the Tanzanian government of the development of the pandemic situation, asked every Chinese citizen who came back from China during that period to actively cooperate with the Tanzanian government's testing measures, and voluntarily conduct quarantine for two weeks.

Tanzanian friends have seen and remember China's efforts and self-discipline. When some people used the epidemic to stigmatize China with ulterior motives, Tanzania promptly stood up and spoke out for China.

The safety of Tanzanian citizens in China, especially students in Wuhan, has always been an important concern of the Tanzanian government and people. China abides by its solemn commitment to "care for foreign nationals in China as if we were protecting our own citizens, and care for foreign students in China as if they were our own children". China has demonstrated its spirit of "boundless love" with concrete actions. The Hubei government and relevant colleges and universities have provided medical and daily life services for students from other countries, including Tanzania, and made thoughtful arrangements by setting up hotlines and conducting online teaching. The Chinese embassy in Tanzania worked closely with the Tanzanian government to deliver a batch of protective materials to the students in Wuhan, and actively communicated with their parents to dispel their concerns.

At present, the global anti-pandemic situation has entered a new stage. China's domestic outbreak is basically under control. However, the spread of the pandemic in multiple places around the world is accelerating. Africa is inevitably affected. Tanzania confirmed its first case on March 16. As for the increasingly severe pandemic challenge in Tanzania, China has provided assistance and support to Tanzania's anti-pandemic work within its ability.

China supports Tanzania in hosting the Health Ministers' Meeting of the Southern African Development Community (SADC) on which I shared China's useful experience. Using the African Union and the African Center for Disease Control and Prevention as the main platforms, China has provided reagents to Tanzania and other African countries and held video conferences with experts on prevention and control to share their experience and research results. In view of the practical difficulties such as the shortage of anti-epidemic materials in Tanzania, the Chinese government is actively raising funds and will provide a batch of urgently needed medical and protective equipment to Tanzania very soon, while the Chinese embassy has donated some urgent materials to support Tanzania's combat efforts, including constructing an isolation center for COVID-19. China's local governments, businesses and civil society are also taking the lead in helping Tanzania. The first batch of protective supplies donated by Jack Ma Foundation and Alibaba Foundation have been handed over to the Tanzanian government, and the second batch of materials including ventilators is scheduled to arrive this week. Some Chinese-funded enterprises in Tanzania have provided subsidies to the local government in Arusha to build isolation centers and treatment centers.

The novel coronavirus outbreak further highlights the importance and necessity of building a community with a shared future for mankind. When President Xi delivered an important speech in Tanzania in 2013 entitled Trustworthy Friends and Sincere Partners Forever, he stressed that "China and Africa have always been a community with a shared future". China-Tanzania relations have always been at the forefront of China-Africa relations and will continue to play an important role in building a closer China-Africa community.

We believe that with the concerted efforts of all countries in the world, including China and Tanzania, we will surely overcome the disease and embrace victory. The friendship between China and Tanzania will become more deeply rooted in the hearts of the people because of their shared fight against the virus.

The author is the Chinese ambassador to Tanzania. The author contributed this article to China Watch, a think tank powered by China Daily. The views do not necessarily reflect those of China Daily.