Sino-US conflicts should be resolved smartly 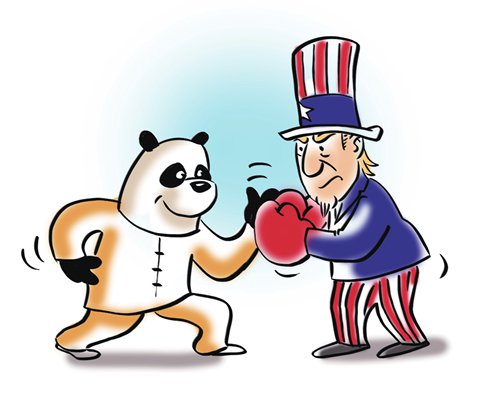 The newly released US National Security Strategy and National Defense Strategy have highlighted the tremendous challenges China poses to the US, giving an impression that rivalry between the two is intensifying.

The heated debate on "whether an established power and a rising power will fall into the 'Thucydides Trap'?" continues to buffet the two countries; US warships illegally enter Chinese territorial waters from time to time; and Washington still conducts multi-level, frequent close-in reconnaissance activities against China. Ties between the two countries remain strained and crisis control has been an important task over a long period of time.

With careful analysis of Washington's use of military technique, we can easily draw a conclusion that China and the US can avoid big wars. The US has adopted mainly four types of technique in the past half a century: direct use of military forces to capture territories; use of threat of force and deterrence to subdue the enemy without engaging in battle; siege of the city to fetter the enemy with military or semi-military blockade; all-round sanctions, especially economic ones.

Partial or all-out military confrontation does not apply to Sino-US relations except on the Taiwan question which may become the tipping point. Therefore, the two nations can avoid large-scale military conflicts.

Sino-US rivalry has mainly centered around issues related to China's sovereignty, such as arms sales to Taiwan, the South China Sea, Tibet and Xinjiang. In the new era, there have been three dimensions to their conflict.

First, in terms of overall strategy, the US focuses more on the impact of Beijing's governance on bilateral ties, the "trade imbalance" and solutions in the US eyes, and possible global impact of China's expansion. Currently, fear of China's rapid development has prompted many strategists in Washington to offer suggestions in the hope of avoiding the effect of "China's peaceful evolution on the US."

The second one is to create military friction or semi-military conflicts. The US has always tried to challenge China in the South China Sea. But as long as China adheres to its own pace, enhances relations with Vietnam and the Philippines, and implements the memorandum regarding the rules of behavior for safety of air and maritime encounters, the situation will not go out of control even if major clashes and crises break out between the two sides on the South China Sea issue.

The third is economic warfare. Fierce economic conflicts have been seen after China and the US established diplomatic relations, but none of them completely subverted the two's economic and trade ties.

Economic tactics that may be used by the US against China in the near future can be summarized in the following forms.

First, carrying out stricter audit for China's investment and enterprises in the US to raise the threshold for market access. Second, for implementing Section 301 of the Trade Act of 1974, the US may strengthen monitoring and curbs on China's economic information on the pretext of protecting intellectual property rights while seeking to promote information flow and requiring Beijing to step up penalties for infringement. Third, cracking down on China's relevant industries in the name of anti-dumping, anti-subsidy and anti-counterfeiting measures. Finally, taking unilateral action against what the US considers "unfair" or "violation of the rules."

It is quite possible that the US under Trump would be overly dependent on punitive measures to exert continued economic pressure on China. This is partially because the US lacks confidence in whether its economy could continue to lead global development or many Americans have started doubting their country's innovative ability.

Why can antagonism between China and the US not end despite so much cooperation and exchange? As various complicated factors mix when major conflict of interest occurs, the US will not be a paper tiger and would hit back. What we can do is scientifically predict variables and solutions for the crisis, strengthen self-protection and strive for the best win-win outcome.

Beijing and Washington should not make mistakes on fundamental issues when dealing with confrontational and sensitive subjects.

Instead of brute force or simple national strength, the two countries should focus on how to win with wisdom and implement dialogue and cooperation mechanisms that can eliminate confrontation.