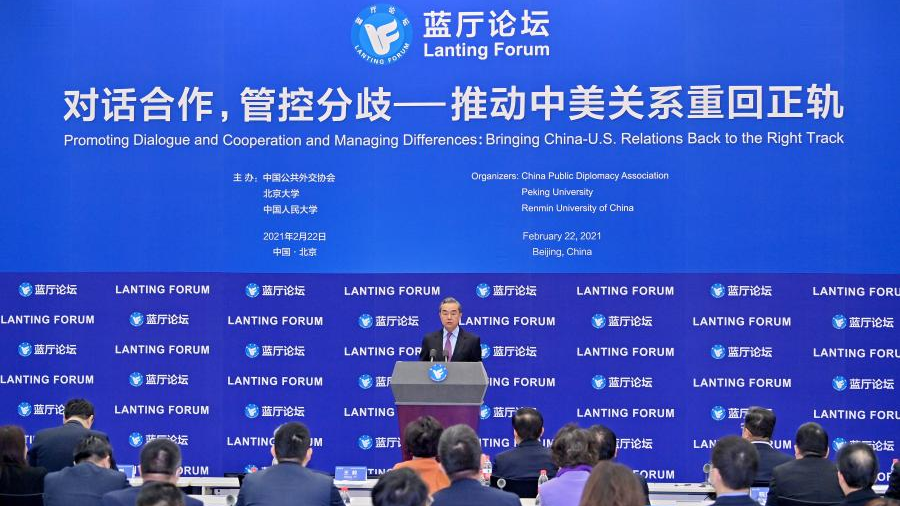 Chinese State Councilor and Foreign Minister Wang Yi delivers a speech at the opening of the Lanting Forum with the theme of "Promoting Dialogue and Cooperation and Managing Differences: Bringing China-U.S. Relations Back to the Right Track" in Beijing, capital of China, February 22, 2021. (Photo: Xinhua)

The winter ice is about to melt, and the spring flowers are about to blossom. There is also a need to break the ice in Sino-U.S. relations. In yet another affirmation towards improving bilateral relations between the U.S. and China, Chinese Foreign Minister Wang Yi on February 22 expressed China's willingness on how the relations between the two countries can potentially cooperate towards addressing global issues such as climate change and the pandemic.

His address at the Lanting Forum in Beijing was about repairing the damaged relationship which has otherwise been marred by aggressive geopolitics, bellicose rhetoric and damaging policies. There is a need to break the ice just like this week 49 years ago when Richard Nixon visited China.

In many ways the foreign minister's comments echoed similar sentiments expressed by Chinese dignitaries such as China's Ambassador to the U.S. Cui Tiankai. A growing realization that Trump era policies involving harmful trade practices and isolationism would only harm the bilateral relationship at the expense of the collective good has resulted in Beijing constantly pressing for cooperating with the U.S.

The pillar of cooperation is trade and as the foreign minister stated, greater animosity was fomented due to pernicious tariffs on Chinese exports during the Trump era. Policies aimed at economic strangulation instead of connectivity did not serve either side well with the presence of tariffs and repression of the Chinese tech sector only emboldening hawkish stances. Based on facts alone, it is irrefutable that the Trump era witnessed attempts to undercut initiatives which had the potential to strengthen the bilateral relationship as part of soft power diplomacy.

Beyond the recent past, reversing this order is definitely possible given that historical events set an example. Prior to the his address at the forum sponsored by the foreign ministry, officials played Ping Pong diplomacy referring to a 1972 exchange of table tennis players between the two countries setting the stage for President Richard Nixon's visit to Beijing this week almost half a century ago. 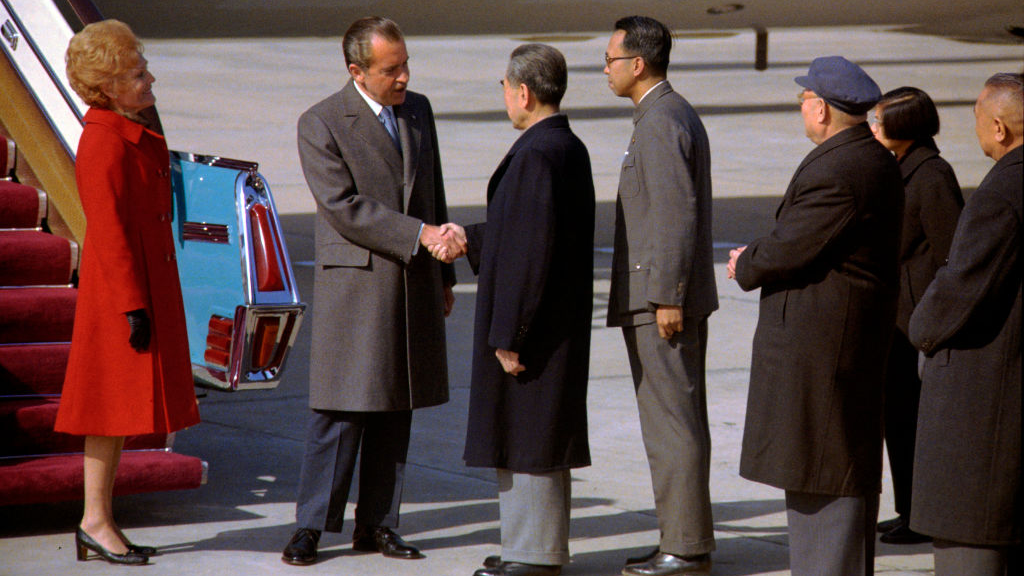 Sports diplomacy, cultural exchanges, and promoting greater people to people contact have great potential in thawing China's relationship with the Biden administration as the 1972 event demonstrates. Such references even in tumultuous times shows Beijing's willingness to explore opportunities for cooperation instead of hark back to an era where diplomacy, communication and even pleasantries were absent, let alone sporting exchanges.

Improving relations is also a two-way process which requires reciprocity as a prerequisite as much as goodwill. Toning down rhetoric related to what the foreign minister referred to as respecting China's core interests is critical. Ceasing smear campaigns against the Communist Party of China (CPC) as much as respect issues related to territorial sovereignty can provide an environment conducive for improving the relationship. The Biden administration has so far retained maximum pressure strategies on China and endorsed the previous administration's stance in China's Xinjiang Uygur Autonomous Region.

Furthermore, attempts at arousing separatist forces in China's Taiwan as well as adopt policies such as the recently passed U.S. House of Representatives bipartisan resolution about China's Hong Kong in the absence of bilateral dialogue will only result in both sides going back to square one. Conversations are needed to resolve all outstanding disputes with track two diplomacy, delegation level talks and even state level visits setting the stage for a closer, more refined and amiable relationship which requires positive optics.

No more is the need for capitalizing on positive optics more evident than the foreign minister's reference to the recent phone call between President Biden and President Xi which he considered a "positive step." The bilateral relationship needs to blossom instead of descend into Trump era binaries and there is optimism that Biden's tilt towards multilateralism can potentially open up avenues for cooperation with China on issues such as climate change, Korean peninsula issues and above all, the COVID-19 pandemic.

Working together on pressing global issues will set an important precedent for the international community that two global powers while setting aside their differences, worked towards resolving international global issues for the collective good of humanity.

For that to materialize there is a need to break the ice and capitalize on positive optics while address differences through communication. The foreign minister has provided a template on how it could be done.