After the World Health Organization (WHO) found that it's "extremely unlikely" that the novel coronavirus leaked from a lab in China, certain countries, including the US, have remained indifferent to the fact that the world is at a critical stage in the fight against the rampant COVID-19 pandemic, having once again hyped up the "lab leak" theory, politicizing the virus in an attempt to stigmatize China. 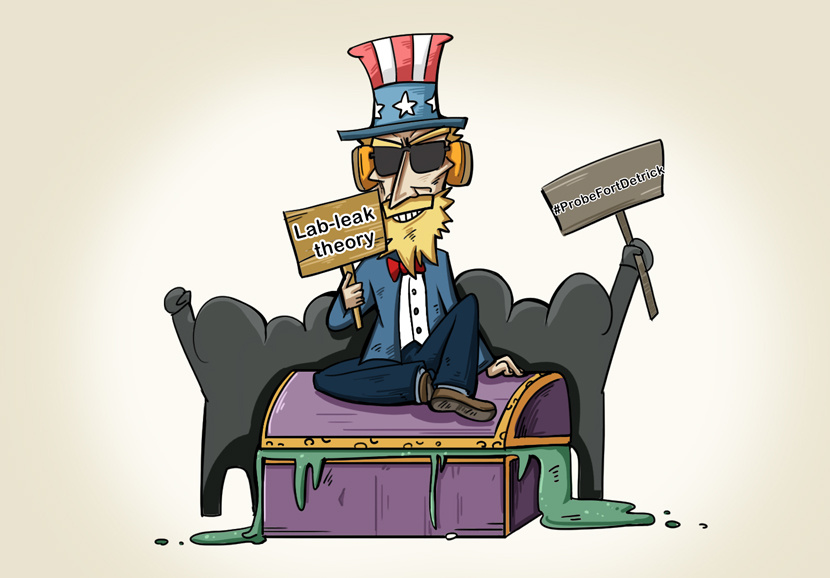 China has always taken an open, transparent, scientific and cooperative attitude on the issue of origin-tracing. It has taken the lead in cooperating with the WHO on origin-tracing, and has twice invited WHO experts in for origin-tracing studies, having also opened the Wuhan Institute of Virology to international experts. The US, by contrast, has never given any explanations to the international community over questions such as when the disease first arose in the US and how it was transmitted, as well as questions surrounding the Fort Detrick bio lab.

Why did the US refuse to reveal the reasons behind the closure of Fort Detrick, a biosafety level-4 laboratory run by the military which studies deadly and infectious biomaterials? Why did the US refuse to accept international investigations? The US has more than 200 military-related biological laboratories in 25 countries and regions, including in the Ukraine and Afghanistan. Since 2003, there have been hundreds of cases in which workers in some of the labs conducting research were fatally infected with bacteria due to accidental contact with the deadly microorganisms, and the diseases later developed into epidemics in the local communities. What happened in these labs?

Turning a blind eye to its own failure during the country's COVID response, the US spared in no effort to denigrate China. Such double standards have severely undermined global scientific studies into the virus, hindered the joint efforts of the world in fighting the virus, and aggravated political confrontations and divisions. As it has seen a more dire COVID-19 situation than other countries around the world, the US should take responsibility for its own people and people around the world and play an active role in the global battle against COVID-19.