OPINIONS Skopje-Athens deal in perspective: hold off on the confetti!

Skopje-Athens deal in perspective: hold off on the confetti! 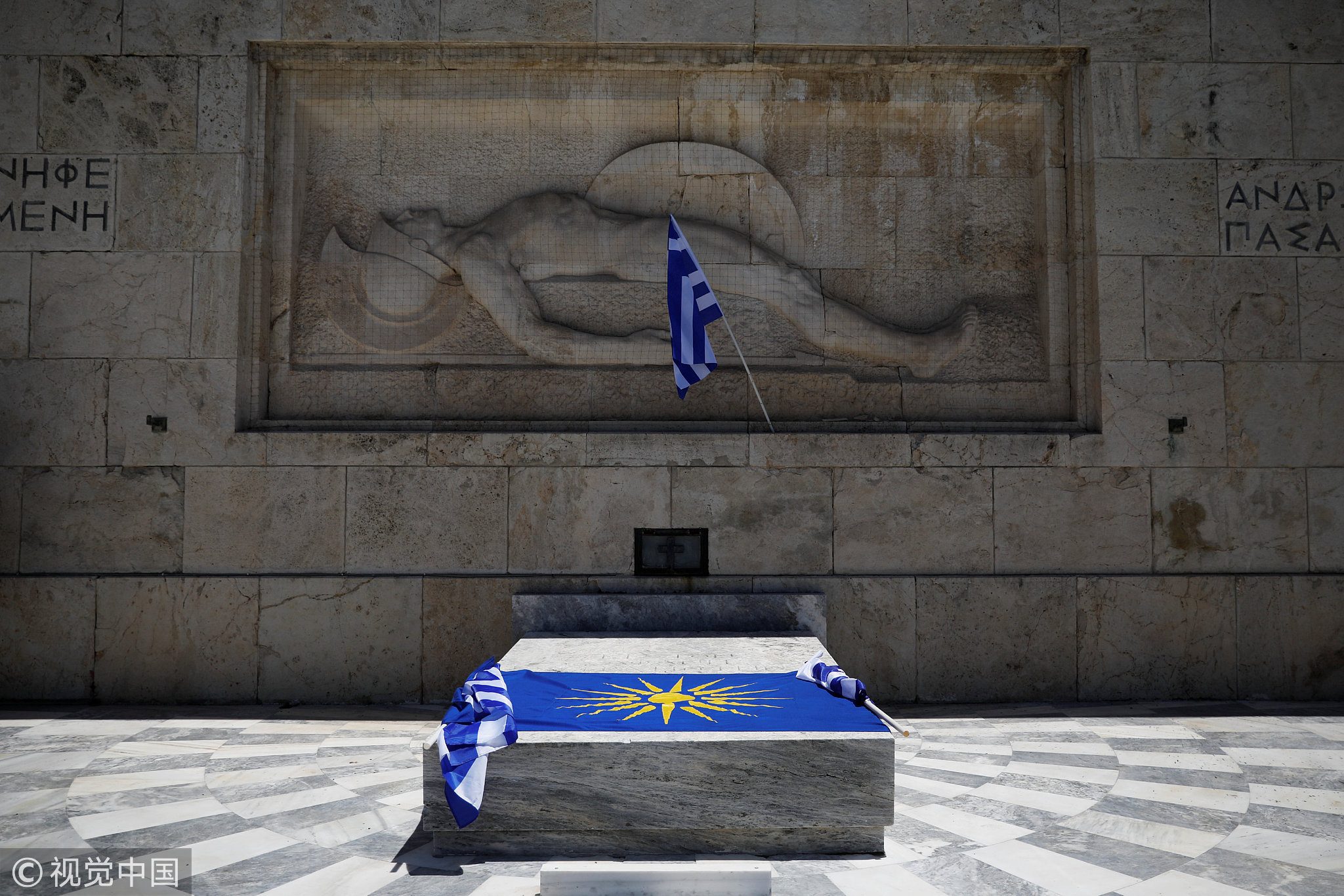 A flag depicting the Vergina Sun is laid on the Tomb of the Unknown Soldier during a demonstration against the agreement reached by Greece and Macedonia to resolve a dispute over the former Yugoslav republic's name, in Athens, Greece.(Photo:VCG)

The Republic of Macedonia is rarely noticed by global media. As it usually goes, small countries on the periphery hardly attract any attention, except when there is conflict or bloodshed.

Yet, this is a second time that this small nation’s history hit the international headlines.

Complex situation on the Greek Side

Few would remember that for quite some time the newly independent state, which was the only former Yugoslav republic to gain independence in a completely peaceful manner (1991), was widely referred as an ‘oasis of peace’.

Amidst Yugoslav turmoil and ethnic cleansing, the Republic of Macedonia took another way out. The EU-founded Arbitrary Commission declared that only Macedonia and Slovenia met the standards for international recognition as well as that the name ‘Macedonia’ does not imply any irredentist or territorial claims toward any other state.

Greece disagreed, and a long thorny dispute over the name began. After 27 years, the bitter dispute that prevented the Republic of Macedonia’s integration in NATO and EU seems to be coming to its end.

The headlines hail a new peaceful and even miraculous ‘final solution of the EU’s longest diplomatic dispute’.

The whole international community has rushed to congratulate the Greek and the Macedonian prime ministers even prior to the signing ceremony, let alone the ratification of the deal.

Interestingly, the key international actors that could have helped resolve this absurd dispute that cost dearly the Republic of Macedonia both internationally and internally, now picture this success also as their accomplishment!

An objective observer would be more cautious and suggest: hold off on the confetti! This is not the end of the dispute but entering into more troublesome waters of its interpretation and implementation.

There are indications that the deal was not only initiated but even drafted in the US by a number of experts whose identity is kept secret as the ‘fame’ should go to the local actors (the prime ministers and their teams) as if they were so wise to draft the document.

Second, the dispute is more than 27 years old, but paradoxically as it may sound, the deal comes when the time is not ripe. As the situation and the climate in both countries show, there is no political, and even less a national consensus!

Tsipras government survived confidence vote, but although it is hard to predict the political development, one thing is sure: the extreme right has gained a new ammunition for future struggles; it is going to gain more political influence in the public. The majority of the population does not support the deal.

Mess in Republic of Macedonia

Things on the Macedonian side are equally complex: Zaev’s ruling party has no majority in the parliament, and depends literally on the support of the ethnic Albanian parties.

The general public is understandably against a deal that imposes unprecedented ‘solutions’, first and foremost a deal that is in breach with international human rights law.

The deal is seen as a capitulation because the government has accepted the name change that applies not only internationally but also internally!

If the devil is in the detail, in a 20-page long agreement (which is a unique example per se), with too many details (‘devils’). The internationals around Nimitz have collaborated with an attempted law breaking and constitution-breaking exercise.

This is wrong, because the rule of law is very precious in the Republic of Macedonia as elsewhere. The deal that usurps the will of the people to change its constitutional order and (re)name itself goes against all stated policies of the international community which is to strengthen the rule of law in the western Balkans.

From a procedural point of view, the deal may be ratified in the Macedonian parliament (with simple majority of 61 votes!) but the president Ivanov is the primus in terms of constitutional share of responsibilities when it comes to signing international agreements.

He clearly stated that he will not sign a deal negotiated with no consultation with him whatsoever and that it contravenes the constitutional provisions in more than one aspect.

The government promised to ask for support on a referendum, probably in September or October this year.

The very exercise is going to polarize the nation to such a degree that ‘resolving’ one bilateral dispute (against the will of the people concerned) will surely open a Pandora box of a protracted internal divisions and conflict.

One can hardly summarize all parts of the agreement that is hailed as ‘historical’ in a short piece like this. But, most international lawyers we consulted agree that the deal is a brainchild of geopolitics, involves serious breaches of international law on human rights (individual as well as collective), and as such it is a recipe for a future disaster rather than a glorious example of a peaceful (European style?!) settlements. Unfortunately, Macedonia remains an apple of discord in the Balkans.