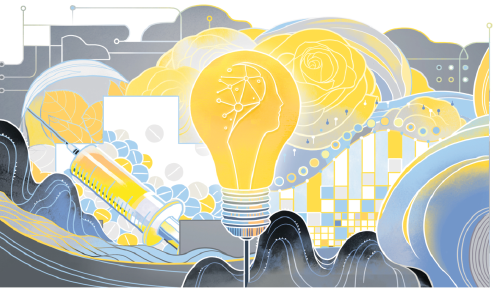 Given the huge pressure on the economy, Premier Li Keqiang emphasized the importance of technology in facilitating economic recovery in the Government Work Report he delivered to the National People's Congress on Friday.

To be sure, quite a few sectors have made a number of major achievements in scientific and technological innovation and emerged as new growth drivers over the past few months.

Since late January, when China began all-out efforts to contain the novel coronavirus outbreak, Chinese enterprises have come up with one innovation after another-from new products and new methods of production to new forms of enterprise organization-in the economic and social fields. And some of these such as smart technology can be developed further to boost the Chinese economy.

Smart technology has played a particularly important role in leading a largely successful battle against the virus. Earlier, the pulse oximeter was needed to measure oxygen saturation in people's arterial blood. But thanks to smart technology, many of the wearable devices, from smart watches to smart bracelets, popular among consumers now come equipped with the added function of measuring blood oxygen saturation. And with the pandemic raging across the world, the demand for hardware and software upgrades of such smart wearable devices will rise.

In fact, many intelligent technology-powered smart devices, such as "intelligent thermometers" used in public places with a large flow of people, mobile phone positioning and tracking system, the personal health code system and community anti-epidemic management apps, have been developed at a rapid pace in China.

As such, smart technology is also expected to become a new "growth driver" for China's export sector. In the fight against the epidemic, Chinese enterprises have shown rapid response capability, reflected among other things in the manufacturing of innovative products, including KN95 masks made with the help of nano technology.

Artificial intelligence (AI) has become the most popular new technology, a field in which China enjoys an advantage, over the past two-odd years. Of the four biggest enterprises using AI to safeguard public health, three are Chinese, and all three have intensified research and development to make new, smart products. For example, after lockdown was imposed on Wuhan, the then epicenter in China, on Jan 23, Uniview, a privately-owned Chinese enterprise, launched an intensive anti-epidemic R&D campaign.

Although the epidemic broke out just before the Chinese Lunar New Year, a time of travel for hundreds of millions of Chinese people, by the end of March, Uniview had launched a series of eight programs, and its innovative products and services including "intelligent thermometers" with thermal imaging, and AI-and extrasensory technology-based equipment and anti-epidemic community apps have been used in more than 1,000 projects in 100 cities in the Chinese mainland, and helped resume community life, school classes and factory production.

Besides, a quarter of the company's intelligent manufacturing capacity is dedicated to making anti-epidemic equipment, and it reached peak operation in April with daily production of 5,000 sets of such equipment.

Chinese AI enterprises have rapidly grown to occupy an important position in the emerging intelligent anti-epidemic equipment market, and their products are in high demand. For example, Uniview's thermal imaging products, and AI-and extrasensory technology-based devices hardly have any competitors.

Consumers at home and abroad ordered such products as soon as they saw their demonstration online but still had to wait for up to two months to get the delivery. After meeting the urgent domestic need for such products, Uniview began exporting them from mid-March. The annual sales of these products are expected to reach 1 billion yuan ($140.31 million) this year, equivalent to more than one-fifth of Uniview's total revenue of 4.94 billion yuan. Besides, even after the pandemic is fully contained, the company is likely to find new uses for such devices.

In the field of service trade, too, China's information technology and smart technology sector seems set to help develop new forms of e-commerce and become a new "growth engine" for service exports. For instance, some medical institutions provided free consultation for COVID-19-related symptoms using the internet in the initial stage of the outbreak. The scope of such free consultation has rapidly expanded to include all diseases, and the service is open 24x7 after governments at different levels launched different initiatives.

If China's medical team cooperates with such online medical institutions to provide online medical services for overseas clients, they, too, can possibly become a new growth driver for China's service export sector. But, as the Government Work Report said, in order to unleash the potential of all types of production factors, it is important to increase the flow of human resources, and foster technology and data markets.

The author is a researcher at the Chinese Academy of International Trade and Economic Cooperation. The views don't necessarily reflect those of China Daily.