US President Donald Trump tried to prove his effective leadership in the COVID-19 fight during the White House briefing on Saturday. He said that the US mortality rate was 11.24 per 100,000 people, lower than that of Spain, France and Italy. China's mortality rate is only 0.33 per 100,000 people and Trump blasted it as "impossible," saying "does anybody really believe this number?" 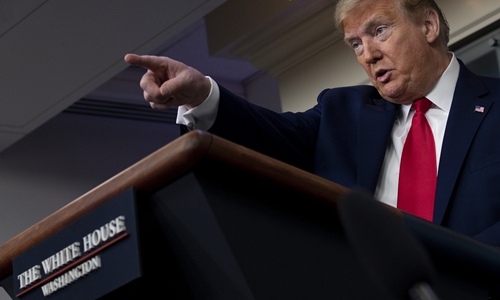 US President Donald Trump speaks during a Coronavirus Task Force press briefing at the White House in Washington, DC, on Sunday. (Photo: AFP)

The COVID-19 has claimed 4,632 lives in the Chinese mainland so far. For the Chinese people, the number is already very large. Some 3,869 people died of the virus in Wuhan, which is difficult for people to accept. Chinese public opinion has been questioning why so many people died. We think our country could have saved more lives and we sincerely believe that there is room for improvement.

The US is the most powerful country and has the most abundant medical resources and the most advanced technology. It could also refer to China's experience. But now, its daily deaths are around 2,000 and could peak at 4,000. This is completely beyond the Chinese imagination of the US. There is no reason for such mass deaths. The COVID-19 spread in the US is almost like that of a primitive society. It should not have been like this if the US had the slightest science and organization.

The US president and ruling elite should have reflected on the current situation, but the federal government regards passing the buck to others as top priority. It quarrels with governors and the Democratic Party internally, and shirks responsibility to China and the WHO externally. Now it is claiming the US mortality rate is not as high as Europe and China's figure is "impossible." This is politically unethical.

China never intended to compare itself with the US. China has been doing its utmost to protect people's lives while the US has been weighing between people's lives and the economy. Moreover, those in power are calculating which side helps them win the upcoming election.

The US has never seen containing the epidemic and reducing the death toll as an overarching purpose. The federal and state governments have been engaging in endless disputes, and leading officials at both levels are focusing on their public appearances. US officials are in fact competing on how to act more like a "wartime leader" and how to shift blame onto others.

To put it bluntly, the US is no match for China in terms of anti-epidemic organization and mobilization. The US political system has been hit by the pandemic on its weak side and we were willing to show understanding for that. After all, every system has its weaknesses.

However, the Trump administration has repeatedly found fault with China, blatantly accused China of fabricating epidemic achievements, eagerly passed the buck to China and unscrupulously attempted to win reelection by stepping on China. In that case it is not our fault to reveal the miserable failure of the US.

Nearly 40,000 people have died of the coronavirus in the US, way beyond other countries in the world. And it is hard to tell how large it will become. Even if US laws are not ready to hold those in power accountable, history will eventually put them on trial.

The Chinese government has done its utmost to fight the epidemic and has controlled it, preventing the deaths from rising out of control like that in the US. China's achievements stand the test of time and all kinds of doubts. The Trump administration only wants to shirk responsibility by blackening China. This will be proven a lame trick. This will only reflect the incompetence and ethical failings of the related US politicians.