Solidarity key to fight against virus 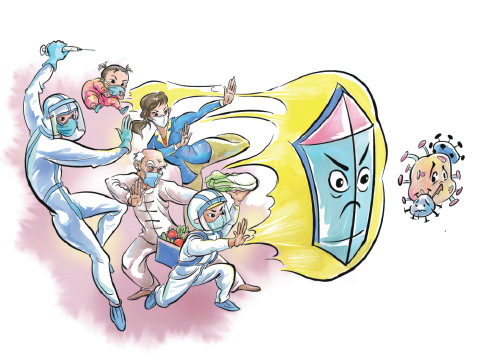 Editor's note: The resurgence of the novel coronavirus in some cities in China has prompted the authorities to implement strict pandemic prevention and control measures, even lockdowns if needed, which could affect economic activities. What should the authorities do to minimize the impact of anti-pandemic measures on economic development? Three experts share their views on the issue with China Daily.

Since the COVID-19 pandemic continues to wreak havoc around the world, it must be treated with all the seriousness and the magnitude of potential ramifications it entails. The global death toll is incredibly high and the world has been living with an extraordinary virus that needs extraordinary mitigating measures.

It is a policy that fits China's national conditions and is based on scientific rules. China's all-around response to the pandemic has produced solid results because the authorities placed the people's life and health front and center. Which also reflects the strength of China's system to contain outbreaks and ensure people's safety.

Public health experts argue that if these measures were not taken in a country with the world's largest population and densely populated cities, the results could have been catastrophic. As Zhong Nanshan, one of China's top pulmonologists, said, this strategy is the last resort because the virus spreads too quickly and its reproduction rate is too high.

The costs of the anti-pandemic measures taken by China may be high, but it would have been much higher if China, like some other countries, had tried to achieve herd immunity and continued business as usual. Every policy has its advantages and disadvantages, but when people's lives are at stake, what matters most is saving their lives.

Shanghai, China's financial hub and one of the most vibrant cities in the world, is fighting its biggest battle against the pandemic. Shanghai's population of more than 25 million is higher than Australia's, and is concentrated in only 6,340 square kilometers. Which means the virus, especially the highly infectious Omicron variant, can spread at tremendous speed within the community.

Some countries did open their borders while taking measures to contain the virus, but that is not easy for a country as populous as China. For example, China's population density is 153 persons per sq km, while Europe's is 34 persons per sq km. Add to this the fact that most of China's major cities are in the coastal region and 94 percent of the country's population lives on just 43 percent of the land and the threat of infections multiplies manifold.

The above are but just two reasons why China cannot afford to take risks.

The nature of the novel coronavirus is not yet fully known, and it is still mutating. Now a sub-variant of Omicron, Omicron BA.2, has emerged and has been found in eastern China. Which calls for China to be extra alert.

True, lockdowns and other anti-pandemic measures have been implemented in parts of Shanghai. But officials, health workers and volunteers, out in numbers to contain the virus, are extending every possible help to people under lockdown. Also, Shanghai's largest makeshift COVID-19 hospital, "built" at the National Exhibition and Convention Center in 85 hours, covers about 600,000 square meters and has nearly 50,000 beds for asymptomatic patients and those with mild symptoms.

China's goal is to bring down the COVID-19 mortality rate to the same level as common flu but that will take more time.

But while China is fighting to contain the virus within its territory, there is another battle, perhaps a bigger battle to be fought－the global battle against misinformation and tendentious comments. The Western media's latest frenzy with gloomy images of what is purportedly going on in cities under lockdown is another attempt to malign China. Many a time, globalized information, despite their importance, cannot be objective, especially when they are focused on negative aspects. Alarmist views can instigate only fear and prejudice among the people.

Sadly, during this public health emergency in China, some attitudes, comments, and opinions from many parts of the world have not been fair. Badmouthing a country in normal times is bad enough, but fueling bias and animosity against a country in times of a health crisis is malevolent and malicious. Those countries fueling prejudice and animosity against China should be reminded that the virus has no borders, and by fighting to contain the virus, China is also preventing it from spreading in the rest of the world.

While China's fight against COVID-19 is the order of the day, the first responders such as doctors, nurses and other health workers, military personnel, deliverymen and other service providers, and volunteers deserve to be saluted, for they are the real heroes, ready to make the ultimate sacrifice for their country and people.

The first chapter of the white paper, "Fighting COVID-19: China in Action", published in 2020, was titled "China's Fight against the Epidemic is a Test of Fire". That fire has not yet been extinguished.

But this too shall pass. Like in the past, this time, too, China will succeed. The mobilization of governmental and social forces, and the implementation of comprehensive medical measures will eventually help China eradicate the threat. And resilience will prevail, as it always has in China.