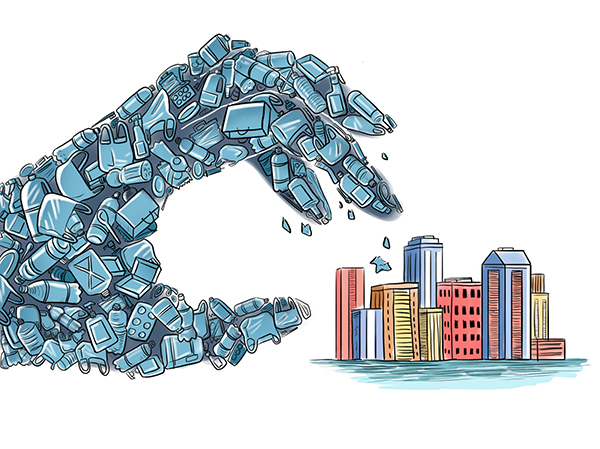 If there's one item that epitomizes our modern world, it's plastic. It's easy to make and use but does untold damage, especially in Asia where rivers, lakes and oceans are literally choking on it.

We are only now learning how pollution has a huge impact on the base of our food web and the oxygen-producing plankton (phytoplankton) in our oceans. Phytoplankton use dissolved carbon dioxide (CO2) in our oceans to produce around 70 percent of our oxygen. They single-handedly remove a third of atmospheric CO2 in this way.

These very small creatures are sensitive to changes in their environment. As oceans become more acidic, they will need time to adapt. A possible scenario is, changes in dominant species, extinction of many species and pollution in surviving fishing stocks. The worst-case scenario is a catastrophic disruption to the base of oceanic food web, which currently feeds 1.4 billion people.

The problem is not someone else's

With so much at stake, why are so much plastic and other wastes finding their way into the oceans? Perhaps because waste, by its nature, is someone else's problem.

But it's a problem that isn't going anywhere.

Over two-thirds of the world's population are expected to live in urban areas by 2050. The challenge is to transition from our energy-intensive, throwaway civilization to a circular economy where resource conservation and effective waste disposal are top priorities.

To start with, we need to admit that not all waste can be recycled. Some wastes have an "end of life" at which point its disposal becomes urgent. Today, we have the technology not just to dispose of waste with minimal environmental impact, but also to convert it into energy and other resources.

It wasn't always that way. In the 1960s, the plastic bag probably ended up in a back-yard fire with highly toxic emissions. In the 1970s, an incinerator would have processed it, still spewing toxic fumes and ash. By the 2000s, many countries had opted for landfills with varying degrees of environmental controls. Recycling often involved burning plastics in uncontrolled conditions similar to old incinerators.

Today, the aim is to recover, recycle and reuse as much waste as possible. Most waste can be recycled if properly separated. The rest can be treated using new technology with emissions 25,000 times less toxic than old incinerators. Most importantly, ash is captured, locked up and the pollutants stopped from entering waterways and oceans.

Japan is a world leader in waste-to-energy technology. These modern facilities emit just 20 percent of the current stringent Japanese emission standard. This technology has been implemented in China with the Asian Development Bank's support for the last five years.

Electricity, heat and steam can be shared among ecopark tenants to maximize resource recovery. Food waste, gray water, human septage (waste content in a septic tank), construction debris, medical and other wastes can all be treated at ecoparks. We are supporting technologies to lock up pollutants and residues safely, and preventing them from reaching our oceans.

Ecoparks can also shape consumer preferences for redesigned products and recyclable materials. Community-based facilities in Spittelau, Austria, and Ningbo in China's Zhejiang province allow the public to see what happens to their waste. And manufacturers will respond to consumer preferences, especially as single-use items attract more scrutiny.

As cities grow and recycling improves, smaller satellite ecoparks can treat organic materials and food waste, thereby curbing transport costs while keeping benefits such as energy in the local area.

Imagine what Uber did for taxis being applied to local waste collectors and traders. The ADB is engaging with apps like www.soluhq.com where consumers can segregate and sell their waste. We are exploring linking such apps to our GIS (geographic information system) platform. As well as promoting better environmental services, this creates opportunities for people without bank accounts to access online services such as banking and insurance.

Also, digitized waste collection can boost government finances. Resource recovery charges can be levied on products based on their "end of life" costs. Companies will redesign their products and packaging to avoid these costs, while further cutting waste generation and sparing the oceans.

Ecoparks and digital technologies also open up channels for a regional approach to waste management. Strategically located ecoparks at ports on busy sea-lanes, such as the Enerkem facility in Rotterdam, can shorten supply chains for tradeable waste products.

As such, Asia's waste crisis is a chance to reframe the region's growth. With the latest technologies and bold thinking, we can transition to a circular economy and save our oceans.