OPINIONS South Asia nations not convinced by empty US promises

South Asia nations not convinced by empty US promises 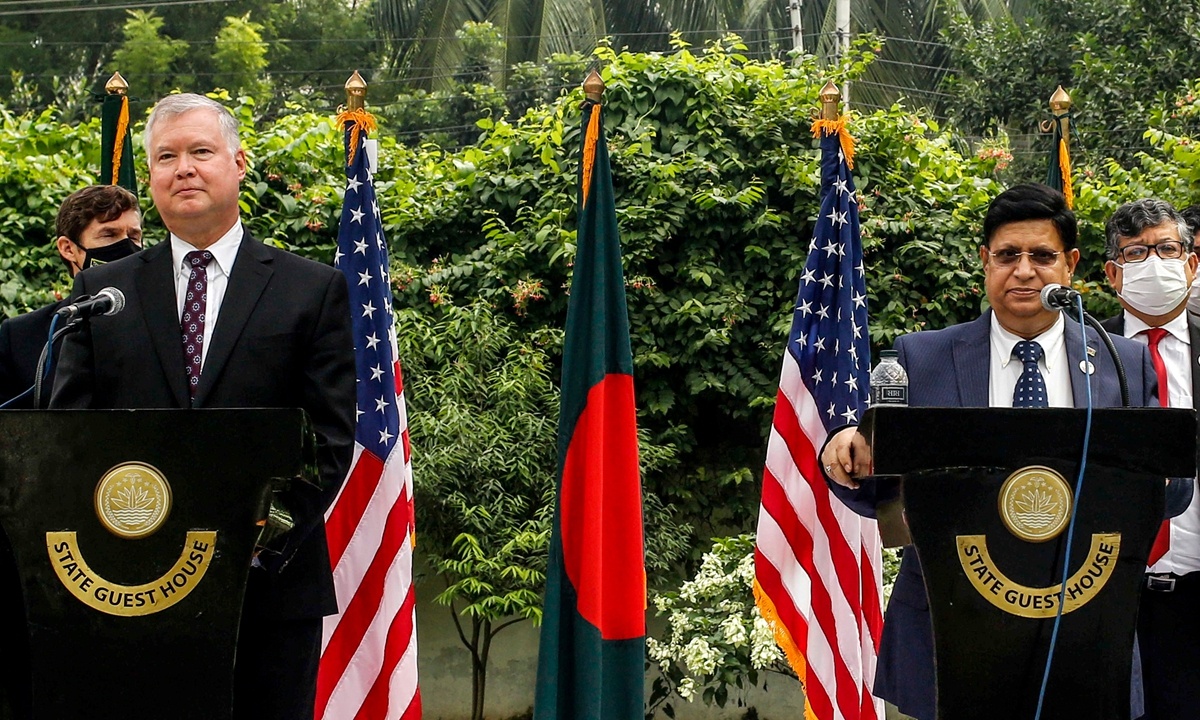 US Deputy Secretary of State Stephen E. Biegun met with senior Bangladesh government officials during his trip to Dhaka, Bangladesh from Wednesday to Friday. The visit is viewed as part of Washington's attempt to raise its visibility in South Asia.

However, US' new South Asia strategy has some difficult issues, such as India-Pakistan relations. As is well known, US-Pakistan relations are perennially tumultuous, frequently tortured, and tenuous at best - especially over the last decade. When Washington and Islamabad do agree, New Delhi gets jealous.

Now that the Trump administration is planning to withdraw from Afghanistan, this means that Pakistan is less strategically important. Indeed, Washington under President Donald Trump is now turning to New Delhi to counter Beijing. In recent years, the US Department of Defense has proposed strengthening relations with India, Sri Lanka, Bangladesh, Nepal and Bhutan. In fact, their fundamental purpose is to target China, and to disrupt the implementation of the China-proposed Belt and Road Initiative (BRI) in South Asia.

The BRI has been widely welcomed in South Asia and has produced tangible results. It is increasing trade among member countries by 4.1 percent. The US' commitment in South Asia is more like a make-believe castle - it simply doesn't exist.

China and Bangladesh have built up a solid military relationship over the past 40 years. In 2014, the two sides signed agreements for China to provide training for Bangladeshi military personnel. Since 2010, Beijing has supplied Dhaka with five maritime patrol vessels, two corvettes, 44 tanks, and 16 fighter jets, as well as surface-to-air and anti-ship missiles, according to the Stockholm International Peace Research Institute. The cooperation between China and Bangladesh is broad, with their political aims in synch.

Despite provocations from the US, the fact is undeniable that the Bangladeshi government has high expectations for China.

Biegun's visit is a sign of US' desire to further implement its Indo-Pacific Strategy, but it has yet to achieve anything. Even a personal visit by Trump would not be as effective as he expects. After all, the foundation of China-South Asia relations is solid. And the "America First" policy has left Bangladesh with reservations.

It is likely that Bangladesh will take advantage of the "olive branch" from the US to benefit its own national interests and for diplomatic decorum. But it will not take sides with the Washington.

Against the trend of globalization and the Cold War mentality pursued by the US, the Indo-Pacific Strategy carried out in South Asia is no different from that in Southeast Asia. It may hurt the national interests of all countries involved. South Asia is a close neighbor of China. Since its rise, China has made every effort to promote development in South Asia and held discussions with regional countries on the basis of equality. The Indo-Pacific Strategy in which the US puts itself first and takes an anti-China stance as its priority is not in line with the global trends.

The US and Bangladesh shared around $9 billion in two-way trade in 2019. Moreover, the US has launched initiatives to accelerate private sector investment in Bangladesh for infrastructure construction. However, this is far from adequate for Bangladesh, a booming country with a large population base of over 160 million people. It will not do anything to improve Bangladesh's economy or infrastructure. This is similar to the US' strategy with its allies in Southeast Asia and East Asia to achieve great gains with little pains.

According to data from the Chinese Ministry of Commerce, from 2013 to 2018, Chinese enterprises invested more than $90 billion in countries along the BRI routes at an average annual growth rate of 5.2 percent. These are real funds. But the US throws millions of dollars at South Asian countries without any sincerity - so the money is worthless.

Even if Bangladesh or other South Asian countries reach some cooperation with the US, it will be more advantageous to Washington. As the world's largest power, the US only pursues its own national interests. But signing a cooperation treaty does not mean choosing sides.

What's more, the US Indo-Pacific Strategy in South Asia will exacerbate the imbalance of power in the region. The current trend of US and India cooperation has contributed to India's dominant position in South Asia. But it has clearly aggravated the imbalance in the region, and posed great challenges to regional peace - especially to Pakistan. The US can hardly achieve its ambitions in South Asia by such using such a divided and distant strategy.