By Vladimir Legenko and Jiang Yuan 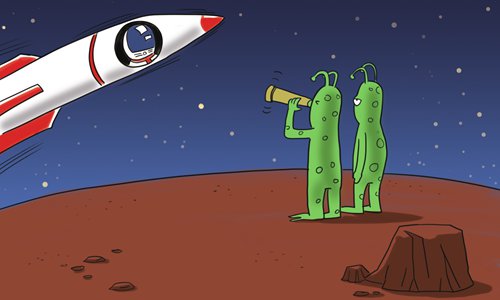 It's been about a few weeks since the private US firm SpaceX launched the world's largest rocket. According to the company, its main goal behind such ventures is the colonization of planets on which humankind may find shelter in case of catastrophic events on Earth. In spite of stating its goals, SpaceX's latest venture became the subject of extensive rumors. Why was the company launching a rocket that could put into Earth's orbit not only one, but a whole group of satellites? Such rockets will be able to carry parts for future space stations and would be helpful in transporting cargo for construction of bases on the moon or Mars. Soon all such rumors were dispelled by the company's founder - Elon Musk. According to plan, after several years his heaviest rockets will fire into space thousands of satellites that will be able to spread internet cover to the entire surface of our planet. From the earnings of this project, he is going to start colonizing Mars. Of course, such far-fetched plans are very interesting because they actually call into question the need for the implementation of the standard 5G which will be more expensive than this initiative.Although the US is experiencing a boom in private companies that have interest in space, most of them want to focus on tourism or plan to extract resources from astronomical bodies. Earlier, many scientists said we need the moon primarily as a source of Helium-3, which can be used as a safe nuclear fuel.The example of SpaceX shows how a private company can replace the state in space exploration. However, it should be noted that such confidence in the company has come about not only from private investments, but also from multibillion-dollar contracts signed by NASA for the launch of its cargo into space, as SpaceX assured the government agency that it will be able to significantly reduce the cost of the launch. The last few years have been increasingly important for space exploration. China has demonstrated significant improvement in its technologies and showed it can build an outstanding space program. It is more likely to be an opportunity to conduct independent scientific research and highlight the prestige of China's scientific and engineering achievements.In turn, NASA, the European Space Agency and the Russian agency "Roscosmos" have also recently demonstrated an interest in space only for research purpose, which can be explained both by the end of the Cold War and the beginning of cooperation, alongside the existing Outer Space Treaty of 1967 that does not allow states to appropriate space objects and makes governments responsible for the actions of private companies.  However, in 2015, the US allowed its companies to appropriate the resources they had extracted by themselves, and in 2017 a similar law was adopted by Luxembourg, which forced Russia to offer to discuss this issue in April 2018 at the UN, since such actions could trigger a new race in space exploration, bring down commodity prices and completely destroy the economies of many countries that don't have any manufacturing industry or the technology sector, but rely mainly on natural resources. However, this situation is similar to the one in Antarctica on which the resources are yet to be developed, since it could totally annihilate local ecosystems. Moreover, it is not clear who possesses the right to extract resources on the frozen continent. Despite a dispute between Russia and Western countries, a joint statement at the end of September 2017 was issued by NASA and the Russian space agency to jointly build the Deep Space Gateway in the moon's orbit, the space station and a base for refueling spaceships that will later be used to create permanent bases on the moon and Mars.Nevertheless, now there are too many questions about the impact of living in space on human health. Even a few months in the weightlessness of space can lead to irreversible consequences, and no one can predict how bad living there for several years or an entire life be. Childbirth in space remains unexplored and potentially dangerous. The speed of spacecraft is another drawback. The estimated time of a manned flight to the moon is about three days, and to Mars at its closest point to Earth - six months, and to the farthest - about two years. The road to Mars is called a one-way ticket as crew members can't be returned to Earth immediately in case of an emergency. The space and everything linked with it will become a subject of attraction with romantics ready to enter its vast void. But do we really need people in space? It's very expensive and dangerous. We may completely entrust the exploration of space to robots when they have artificial intelligence.