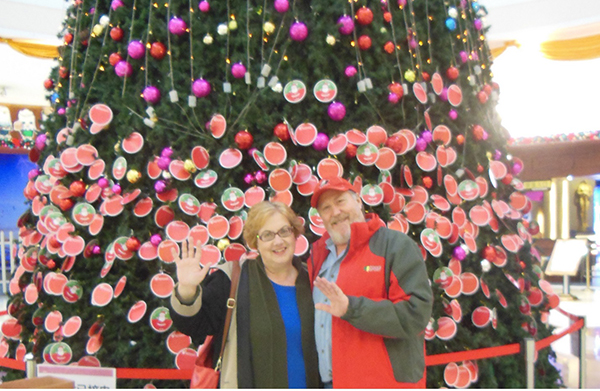 Lona Manning poses with her husband in front of a Christmas tree in China. [Photo provided to chinadaily.com.cn]

I have read some melancholy Twitter posts from some young expats in China who are feeling the pain of being far from loved ones and familiar haunts at Christmastime. For some, it's their first Christmas away from home, family and every familiar tradition, from hanging up their stocking by the fireplace to digging into Mom's sweet potato casserole. I sympathize. But the truth is, I don't mind being thousands of miles from home at Christmastime. I don't think it's because I am an old Grinch who doesn't care about Christmas, I think it's because of one simple fact—the homesick young people are at the beginning of the Christmas life cycle, so to speak, and I'm at the other end.

For a single young man, Christmas is a holiday where you show up and people give you things you really need and want, plus a great home-cooked meal. Perhaps I paint with too broad a brush here—perhaps there are young men who are in-demand as Christmas party guests because they know how to make killer pecan pie—but I think it's generally true, for all young people, that they are the recipients and not the makers of Christmas cheer. Whereas from the time I became a mother, the joy of Christmas has been about making a memorable occasion for someone else.

If I was back home in Canada I would be putting on my Christmas apron and making shortbread, going to weekly choir practice to get ready for a Christmas concert, writing Christmas cards, putting up decorations and trimming the tree, shopping, wrapping, producing a full-on turkey dinner, then cleaning up and packing it all away again for another year. I always point to that line from the Sleigh Bells song, which goes: "there's a happy feeling nothing in the world can buy/ when they pass around the coffee and the pumpkin pie." Um yeah, who is this "they" he's singing about in such an offhand fashion? He's sitting by a fireside in an armchair with a full tummy and barely aware of the fact that the women of the household are still in the kitchen, scrubbing out the roasting pan and rinsing off the plates.

In other words, I know that Christmas doesn't magically appear, it's something you make. It takes a lot of forethought and effort. It is possible to make Christmas in China—after all, China is now the world's biggest producer of Christmas decorations. But when you live in a second or third-tier city in China it can take a lot more time and effort to assemble those ingredients we consider essential for a proper Christmas, whether you're talking turkey, nutmeg, or candy canes. My husband Ross wanted to make reindeer candy canes with our young students last year. We couldn't find candy canes in the stores, so a friend ordered some on the internet for us. We spotted the googly eyes and the pipe cleaners at a market in Shanghai. I think I brought the red puffy noses with me from Canada, and voila, reindeer candy canes with four classes of kids. Plus we taught them to sing "The 12 Days of Christmas", of course.

This was all requested, by the way. The parents of our students—the ones who aspire to send their children abroad to finish their educations—were very interested in Christmas, so we're not being cultural imperialists.

Speaking of Chinese-made Christmas decorations, it was the Chinese that gave the Western world an entirely new type of decoration: the inflatable Santa or Snowman for the front yard, which collapses into a disconsolate-looking plastic puddle when the electricity is turned off. I prefer the colorful wedding arches that appear in our neighborhood when someone is getting married, with double happiness signs, phoenixes and dragons. I hope they catch on in Canada, too!

But I digress. Another reason I don't suffer from holiday homesickness—and here I have one big advantage over the other expats –is that I'm married to Santa Claus.

My husband is a big hit wherever he goes, and he loves meeting kids, handing out stickers and candy and posing for pictures. It doesn't matter if it's kindergartners or university students, everybody gets excited when Santa Claus comes through the door.

Christmas present has its own very different charms. Our Chinese friends are so considerate of the fact we are away from our families and they make a point of wishing us Merry Christmas, giving us Christmas Eve apples, and inviting us out for dinner. Their friendship and kindness is more than enough to warm our hearts.