OPINIONS Sri Lanka blasts a challenge to all nations

Sri Lanka blasts a challenge to all nations 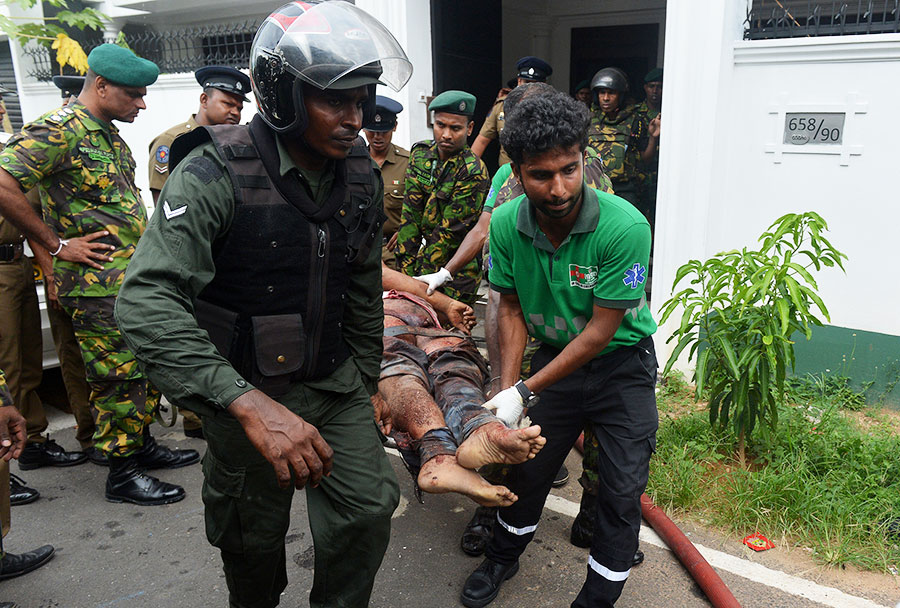 An injured Sri Lankan Special Task Force member is carried by colleagues after a blast during their search of a house in the capital Colombo on Sunday. [Photo/Agencies]

Editor's Note: The eight explosions in Sri Lanka on Easter Sunday have claimed more than 300 lives and left over 500 people injured. A ninth explosion was reported on Monday near a church in Colombo, but none was reported killed or injured. The Islamic State reportedly claimed responsibility for the bombings on Tuesday. Two experts share their views on the attacks with China Daily's Liu Jianna. Excerpts follow:

And the blasts lay bare several threats confronting the whole world. First of all, the reflux of IS terrorists formerly active in Iraq and Syria to countries that have not suffered large-scale serial terrorist strikes in a while poses a serious threat to their people's safety.

Sri Lanka had enjoyed relative peace after the Liberation Tigers of Tamil Eelam, a militant organization demanding a separate homeland for Tamils in northeastern Sri Lanka, was defeated in 2009.

Governments have been keeping a close watch on the small number of people that have returned to their countries after attending IS training camps. Yet the lack of coordination mechanisms among countries seemingly helps the terrorists evade surveillance and collude with extremist forces outside their countries.

Besides, the blasts in Sri Lanka indicate terrorists could also target areas that until now were considered terror-free, especially Asian tourist destinations such as the Maldives and Thailand, because they attract a large number of Western people, as well as investments and interests. To prevent such terrorist attacks, all countries have to make joint efforts to not only strengthen their security but also improve their coordination so they can more effectively combat the common threat of terrorism.

Even though there is no evidence to show social media played a role in the attacks in Sri Lanka, all countries should strengthen supervision of the internet because it is being increasingly used to spread terrorism and plan terrorist attacks. The IS group's online tyranny could be more dangerous compared with its actual presence in a country as a banned organization, because its online propaganda could prove more effective in leading people astray.

Therefore, governments — with the active help of internet companies — have no choice but to play a bigger role in containing the spread of terrorism online.

It is reported that the IS terrorist organization has claimed it was behind the horrific attacks. Yet whoever the perpetrators, the attacks on innocent people should be condemned in the strongest terms, and those responsible arrested and punished.

Since Sri Lanka has been facing some political and economic problems, and increasingly acute social conflicts for the past few years, the attacks seem to reveal not just sectarian disputes but also certain people's dissatisfaction with the situation in the island nation, and the rest of South Asia.

The motive behind the attacks could be helplessness and desperation of certain sections of Muslims in South Asia.

The rise of Islamic extremism has to some extent fueled the rise of white supremacist groups in the United States and some European countries. Perhaps the conflict between Islamic extremism and the anti-Muslim forces today is greater than that immediately after the Sept 11, 2001, attacks in the US.

And the rising tensions in South Asia and other regions should prompt governments to take sound measures to prevent the spread of extremism inside their borders.