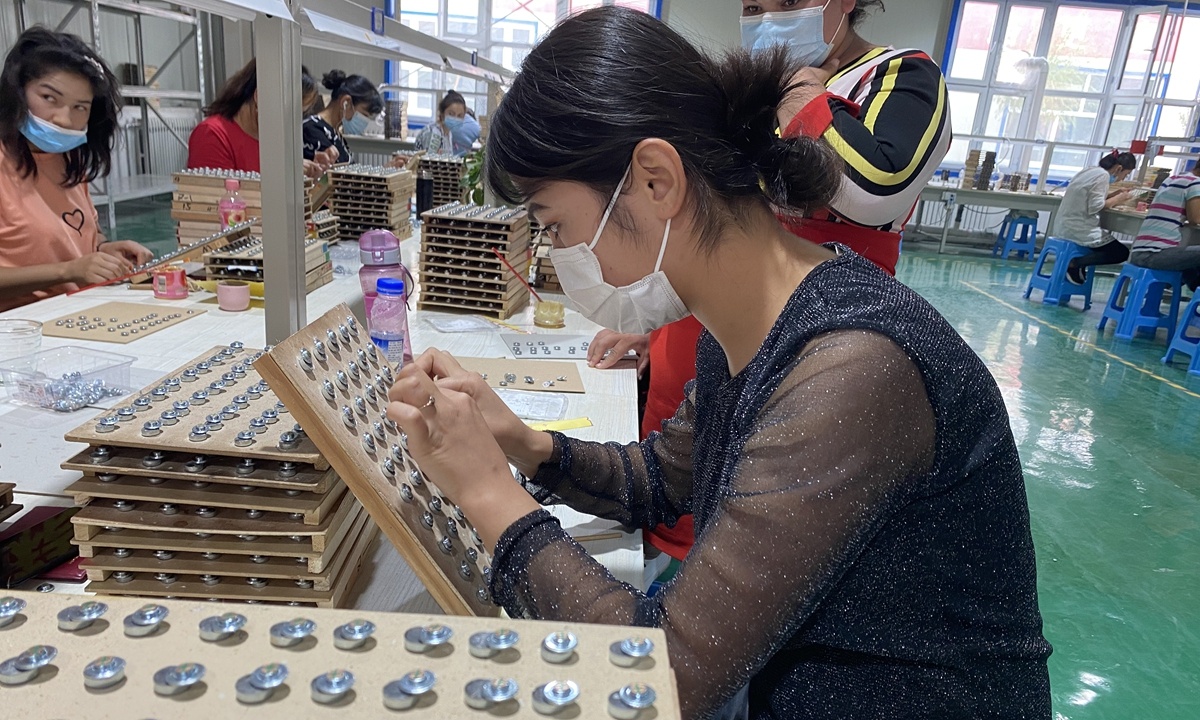 I recently met a woman named Hurxide Adil in a factory producing computer components in Ahu town, Artux city, Northwest China's Xinjiang Uygur Autonomous Region. This 24-year-old woman is already a mother of two children. She is quite talkative and has no difficulty communicating with me in Putonghua, the country's common language. When asked why she has a relatively good command of Putonghua, she told me that she had studied at a local vocational education and training center from 2018 to 2019. "There were excellent Putonghua teachers," she said.

She told me that the center has a highly supportive learning environment. It offers free accommodation and meals too. When she was sick, she could find a doctor in no time at all and she didn't have to pay for her treatment. In addition to learning Putonghua, she also studied law, so she now has a fine sense of legality and illegality. Hurxide admitted that she had once been influenced by extreme religious thoughts.

She is deeply satisfied with her monthly salary of 1,600 yuan ($234). This is of great significance to her as a self-supporting mother. Her husband went overseas three-and- a-half-years ago and she has not heard from him ever since, nor received financial support from him.

Hurxide had no job or income previously. She could only ask for money from her own parents, both of whom are poor vegetable farmers who earn a mere 20,000 yuan annually. Now, Hurxide not only earns a living herself, but also can send money to her parents every month. "They are happy, and I feel glad too," she said.

Another person I met in Ahu was Gulmr Elet, a 22-year-old mother. She works in an earphone factory and also graduated from a local vocational education and training center. She shares similar feelings as Hurxide about the opportunities after having accepted training in the center. Gulmr can now earn a monthly salary of 1,300 yuan. Her income has helped the family. They used to depend only on a miserable, irregular income from her husband who builds brick houses for others.

According to an announcement the Xinjiang regional government made in July 2019, most of the trainees who graduated from the vocational education and training centers are presently employed. They feel fulfilled. The new happy lives of Hurxide and Gulmr are representative of these graduates.

Over the past years, some Western public opinion makers have demonized, in various ways, Xinjiang's governance. They have especially targeted the local vocational education and training centers. They have falsely labelled the centers "concentration camps," accusing them of subjecting trainees to political indoctrination and forced labor. This is totally not in line with reality.

They might as well listen to graduates like Hurxide and Gulmr. Accepting employment-oriented training, learning standard spoken and written Chinese, gaining legal knowledge, and receiving general know-how for urban life with enhanced labor skills have brought them real benefits. Most of them now have stable jobs. They enjoy improved living standards, contradicting Western narratives.

I dare not imagine what it would be like for Hurxide and Gulmr or people in similar circumstances should they continue to be victimized by extremist thoughts. It's very likely that they will still be plagued by poverty, brainwashed, and even become extremists themselves. The vocational education and training centers have changed their lives and destinies. Moreover, realizing employment is especially meaningful for Uygur women. It makes them independent and confident.

The vocational education and training centers are an important part of Xinjiang's governance. Thanks to the exploration of this new governance path, the region is now stable. It hasn't seen a single terrorist attack in the past four years. Terrorist atrocities are among the most horrible memories of local residents. But now they have been able to live and work in peace, striving to improve the quality of life.

People of all ethnic groups in Xinjiang have the final say about who should judge Xinjiang's governance. The standard is whether or not their lives have become better. It should not be determined by the West's political propagandists and foolish media talking heads and liars - people who have never traveled to China or China's western region of Xinjiang.

Some Western politicians and public opinion makers have played tricks to smear Xinjiang's governance under the guise of human rights. If they really care about human rights, why don't they listen to the true voices of local Xinjiang residents? They should have paid more attention to their own domestic thorny racial, immigration and religious issues instead of wagging fingers at others. In fact, Xinjiang's successful governing experience can be used for their reference for their own self-improvement.

No matter how hard the West slanders Xinjiang, the region should and will firmly adhere to its own governance model. This system has totally benefited many people like Hurxide and Gulmr. Even though stability has returned to the region for years, Xinjiang shouldn't loosen its efforts to maintain peace and work for de-radicalization. After all, the greatest way to protect human rights in Xinjiang is by preventing turmoil. This means never stop boosting local people's wellbeing.

The author is a reporter with the Global Times. yujincui@globaltimes.com.cn