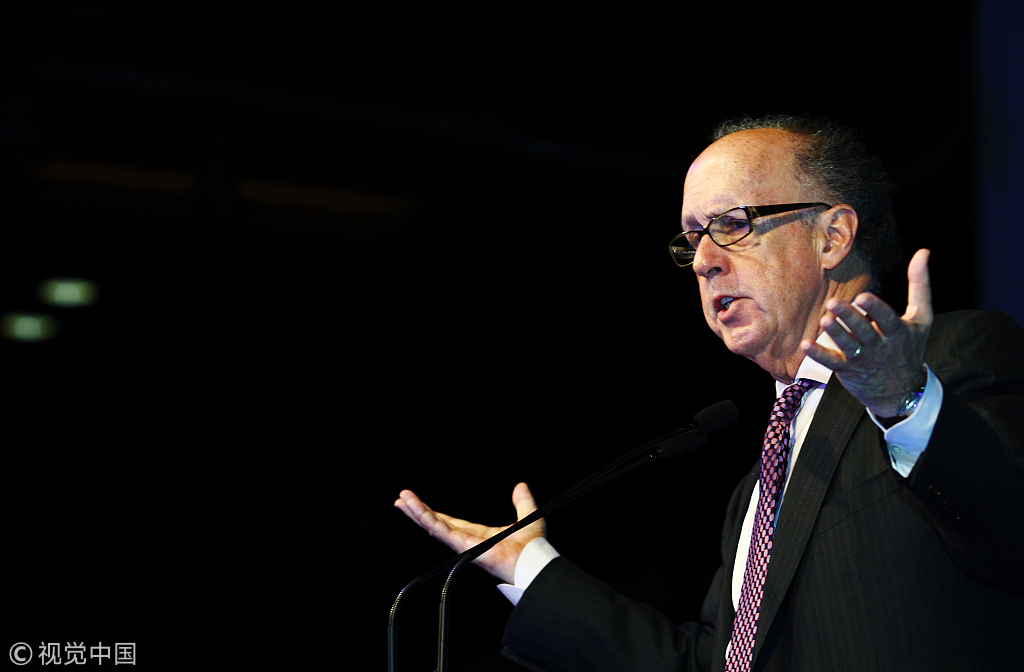 In the midst of an ever-escalating tariff war, I do not share the view that China-US tensions are all about trade imbalances. The real battle is a strategic clash over innovation and technology.

Yes, there is a large and seemingly chronic trade imbalance between the United States and China that is growing even wider today. But this is just as much a function of America’s own macroeconomic problems as a reflection of unfair Chinese trading practices long alleged by the Washington consensus and now underscored by the shrill rhetoric of the Trump Administration.

The United States suffers from a chronic deficiency of domestic savings. Its net national savings rate was just 3 percent in the first half of 2018 — up a bit from the 1.9 percent post-crisis average (2009-17) but still less than half the 6.3 percent norm of the final three decades of the 20th century.  Lacking in savings and wanting to invest, consume, and grow, the US must import surplus savings from abroad and run massive current accounts and trade deficits to attract foreign capital.

The United States had trade deficits with 102 nations in 2017 — a multilateral problem. By opting for budget-busting tax cuts in late 2017, America’s already depressed domestic savings will move sharply lower in the years ahead, pushing its current accounts and trade gaps even deeper into deficit. Moves to rectify this imbalance with tariffs against China will only backfire. The Chinese piece of the trade deficit will shift to higher-cost trading partners, putting more pressure on American consumers.  That is already happening.  There can be no bilateral fix for a multilateral problem.

Trade deficits are a foil for a far more profound struggle between the US and China. A recent White House policy paper says it all: “…the Chinese State seeks to access the crown jewels of American technology and intellectual property.” White House adviser Peter Navarro adds, “China has targeted America’s industries of the future … if China successfully captures these emerging industries, America will have no economic future.”

These charges draw heavily on the March findings of a so-called Section 301 investigation conducted by the US Trade Representative, Robert Lighthizer, a report which has become central to the national anti-China narrative. Unfortunately, the USTR’s conclusions are wide of the mark in these areas:

Joint ventures. Allegations of forced technology transfers through the JV structure overlook the most basic aspect of these arrangements — two partners working together willingly, in the context of commercially and legally binding agreements, to create a business that requires a sharing of personnel, systems, and processes. That was certainly my own experience as a senior executive in a joint venture between my former employer, Morgan Stanley, and the China Construction Bank in building China’s first investment bank, CICC. At no point was I forced to turn over anything to my Chinese partners.

Outbound capture. The USTR also charges China with technology theft through its “going out” policies of acquiring US companies and their proprietary systems. Such allegations of predatory behavior are exaggerated. Tabulations by the American Enterprise Institute find that only 16 of China’s 228 outward bound M&A deals over the decade ending in 2017 were in the technology sector; that compares with fully 51 deals in the real estate sector over the same period.

Industrial policy. The USTR insists that China is using industrial policies, such as Made in China 2025 or AI 2030, to gain an unfair advantage in the acquisition of foreign technology. Yet from Japan to Germany to Pentagon-sponsored innovations of America’s military-industrial complex, industrial policies have been more the rule than the exception for today’s leading economies.

The allegations leveled against China by the USTR make it sound as if the Chinese are interlopers — that they have no rightful claim to the hallowed ground of innovation that has long defined the prosperity of nations. That overlooks the simple but important fact that ancient China was the world’s preeminent innovator. From agricultural production to textile weaving, from paper and printing to missiles and gunpowder, from magnetic polarity and navigational guidance to breakthroughs in civil and mechanical engineering and aeronautics, from discoveries of synthetic insulin to ferrous metallurgy and ceramic technology, China’s extraordinary breakthroughs in science and technology came well before the 18th and 19th century agricultural and industrial revolutions in Europe, and the United States. By the late 11th century, China’s per capita iron output was five to six times the European average; by the 13th century, Chinese textile spinning was operating at efficiency levels that Europe would not enjoy for another 500 years.

While the innovation debate is of critical importance to the current dispute between the US and China, it raises an even deeper question: Will China make the transition from imported to home-grown, or indigenous, innovation that is required to avoid the dreaded “middle-income trap” which has long ensnared most developing nations?

On this count, there are five pieces of compelling evidence to believe that China will pull it off:

Start-up companies. Hubs foster start-ups, providing incentives for a new generation of innovators and entrepreneurs. Over the past decade, the Chinese start-up culture has hit its stride.  China now has over 160 “unicorns” – private companies with valuations in excess of $1 billion each — versus about 130 unicorns in the United States. China’s unicorns span the gamut — from the fintech of internet finance, to a vast e-commerce platform, to online travel, to cloud computing, to big data management, to new energy, and logistics. Moreover, there is also a large population of listed Chinese companies which are already on the leading edge of the global innovation curve – from e-commerce and social media giants like Alibaba, Tencent, JD.com, and Baidu, to world-class leaders in DNA sequencing and biogenetics such as BGI and Hengri, to high-speed rail, autonomous vehicles, and artificial intelligence, where China and the United States are the global leaders in what could well be this century’s most important technology gambit.

Strategy and governance. The lessons of ancient China are not without interest in assessing the future of Chinese innovation and technological development. Then, as now, success hinges on implementation and effective governance to catalyze the creative spark of entrepreneurs and innovators. China’s two high-profile industrial polices, MIC2025 and AI2030, are clear signs that modern China will differentiate itself from its ancient past.

China’s innovation DNA. China’s DNA as an unparalleled historic innovator is very much evident today. Chinese educational reforms are now turning out university graduates of more than 1.7 million scientists and engineers per year. And it’s not just quantity — the quality is increasingly impressive. From nanoscience and nanotechnology, to quantum networking, to stem-cell research and regenerative medicine, to gene editing and the genetics of cancer research, to AI-related breakthroughs that put China, at most, only one year behind the United States. The new innovators of modern China speak volumes to the nation’s own “crown jewels.”

R&D. US National Science Foundation data put Chinese spending on overall research and development of $409 billion in 2015 (in international dollars) — nearly double that of 2010 and second only to America’s $497 billion; significantly, fully 84 percent of overall Chinese R&D expenditures is earmarked for “experimental development,” making China the global leader in this leading-edge category. Equally compelling, the NSF also reports that in 2016 China surpassed the United States as the world’s leader in academic science and engineering publications.

This evidence takes us to an even bigger question: Is China is coming full circle — from an ancient civilization that once led the world in innovation and technology to a modern nation now focused on research, scientific development, indigenous innovation, and commercialization of these activities? By fixating on IP theft, cyberhacking, and forced technology transfer, the USTR’s stress on the dark side Chinese innovation allows for literally no consideration of this possibility. That may well be one of America’s most egregious oversight.

Much has been made over the race for technological supremacy as the decisive factor in the struggle for economic dominance between China and the United States. There is, however, an alternative interpretation. Each economy needs the productivity payback from technology and innovation for its own purposes – China to avoid the middle-income trap and the United States to counter the risks of economic stagnation that might well arise from another productivity slowdown that now appears to be under way. Resolving the innovation dilemma does not imply defeating the other in the arena of global power. This contrast between the zero-sum imagery of the conflict and a win-win outcome of mutual success is of great potential importance in understanding and ultimately resolving the strains in the China-US relationship.

In the end, America’s race, like that of most nations, is more with itself than with any purported foreign adversary. America’s scapegoating of China would make Don Quixote blush. It is a convenient excuse for ducking the tough issues of economic strategy that the United States has avoided for decades – namely, its saving and productivity imperatives.

Both the US and China face formidable economic challenges in the years ahead. They both win if they solve their own problems. They both lose if they attack the other in a destructive and diversionary trade war.

The longer the current China-US dispute persists, the deeper those convictions are likely to become ingrained on both sides of the relationship. And then, the long and tragic history of struggles between rising and ruling powers — the so-called Thucydides Trap— will become all the more relevant. Resolving the innovation dilemma is key to avoiding that potentially dire outcome.

Stephen Roach is a Senior Fellow at Yale University’s Jackson Institute of Global Affairs and a Senior Lecturer at Yale’s School of Management. He was formerly Chairman of Morgan Stanley Asia and the firm’s Chief Economist.