Four months ago, the coronavirus situations in the U.S. and India were worlds apart, with America’s daily COVID-19 cases soaring to between 150 and 250 thousand while India’s single-day case numbers had just touched down to their lowest point at 8,635. Four months later, the contrast remains, but just in the opposite direction: now the U.S. is in a much better off position with 45% of its citizens having gotten at least one dose of the vaccine, while India is meanwhile heading straight down a slippery slope, shattering world records for daily case counts one day after another.

What is even more striking than the two nations’ intersecting fates, however, is that India, which is one of the world's largest vaccine producers, is struggling to mass-produce enough doses even for its own citizens, with America’s disappointing delays in lifting exports bans on raw materials having played no small role in this debacle.

Despite US President Joe Biden’s promise to share AstraZeneca doses and his support for waiving COVID-19 vaccine patents, he can’t wipe away the gritty truth that America and its G7 allies went about hoarding a sizable share of worldwide vaccine stocks, swaying the international vaccine distribution and supply chain first and foremost in favor of themselves. Yes, they haven’t blocked the poor countries of the world from accessing COVID-19 vaccines, but they have nevertheless purchased available vaccines in bulk through bilateral deals; nor have they barred poor countries from directly producing vaccines, yet they instead acted simply to cut off the export of key raw materials. 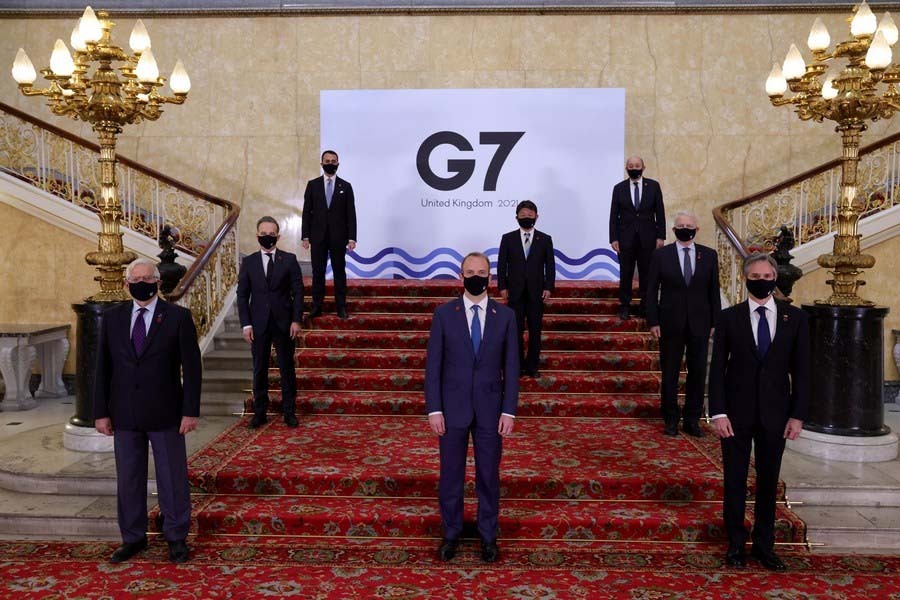 Representatives pose for a group photo during the meeting of the Group of Seven (G7) foreign and development ministers at Lancaster House in London, Britain, on May 4, 2021. (Andrew Parsons/No 10 Downing Street/Handout via Xinhua)

On May 5, at the G7 Foreign and Development Ministers’ Meeting, a joint statement imbued with privilege, conceits and clichés was issued, blathering on about other countries’ internal affairs while conjuring up solutions to issues the group failed to address from the get-go (if not having contributed to making these issues even worse). But the ministers clearly forgot to comment on what the clique had done from the outset to aggravate an unfair situation of vaccine distribution that had been one of their own making (that is, by signing self-serving bilateral deals with pharmaceutical companies reserving orders for billions of doses), nor did they comment on why the U.S. had thwarted others’ attempts to acquire raw materials even with its millions of as-yet-unused doses sitting in storage.

America and some of its allies’ vaccine supremacy lies in the fact that they deploy their authority willy-nilly and abuse their dominant position on what at first appears a seemingly understandable basis – namely, that their citizens (many of whom are reluctant to wear masks or loath to engage in social distancing) should have privileges to get the shot first. Even though the clique would go to every length to slam Trump’s “America First” policy, in practice, they’ve never completely forgone the same insular mindset. That’s no less shocking and immoral than rounding up and stockpiling all the bottled water from the shelves for one’s own personal use during a water crisis as workers elsewhere are dying of thirst in front of the bottled water assembly lines. 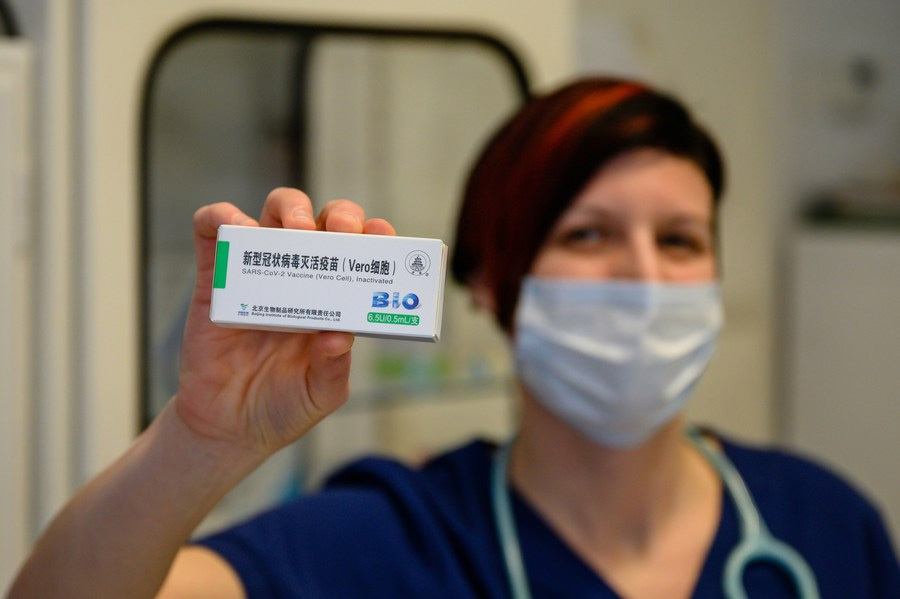 On May 7, 2021, the World Health Organization (WHO) listed the Sinopharm COVID-19 vaccine for emergency use, alongside previously authorized Pfizer-BioNTech, Astrazeneca/SK Bio, Serum Institute of India, Janssen, and Moderna vaccines, highlighting that its “efficacy for symptomatic and hospitalized disease was estimated to be 79%, all age groups combined.”

Following WHO’s go-ahead for the Sinopharm vaccine, a WHO official acknowledged China’s efforts to provide and donate vaccines to vulnerable countries, according to Reuters, especially nations in Africa, Latin America, and Asia who have found it exceptionally difficult to request access to doses from the rich world, noting that China has offered support to the COVAX program by providing COVID-19 vaccines mainly to poor countries.

The U.S. has not shown the slightest hint of appreciation towards China in its efforts to help ameliorate a crisis we are all facing together, instead having continued to smear China from the very beginning: questioning the efficacy of the Chinese vaccines, disputing the transparency of the WHO expert team’s Wuhan trip, and labeling China’s donations and exports of vaccines as vaccine diplomacy, a mere drive to secure geopolitical influence.

It’s not hard to see that the U.S. is falling into the same hypocritical rut and following the same hegemonic patterns when it comes to the issue of vaccines. One can plainly see that America’s targeting of China with its groundless accusation of economic coercion at the G7 meeting is just a mirror image of its own flagrant economic coercion directed against China: whether it’s the U.S. and American allies’ exclusion of Huawei’s 5G equipment, citing so-called absurd concerns over “state-sponsored surveillance” that reflects a self-imposed paranoia of getting spied on, much like what the NSA had itself done to the German Chancellery and other foreign targets for decades, as well as America’s trumped-up accusations of “genocide” and “forced labor” in Xinjiang, which illustrates America’s own ugly past of slaughtering Native Americans and enslaving African Americans. It comes as no surprise then that the U.S. is weaponizing China’s vaccine donations, belittling it in an attempt to gain geopolitical leverage, Janus-faced maneuvering that the U.S. intends to deploy at its own behest and yet fearing such behaviors on the part of other countries on the world stage.

“The U.S. is the last major power to enter the race for global vaccine diplomacy, but still has the opportunity to win it,” said Dave Lawler, an editor at Axios, in his opinion piece entitled U.S. could fill “vaccine diplomacy” void as other powers struggle, a roadmap for how America could win the “vaccine diplomacy” race. He got it right that America “is second only to China in terms of production but has barely exported any vaccine doses at all” as “China has exported more doses than all the other major players combined”, yet his argument that China and Russia had hoped to play a role as early birds seeking to win the “vaccine-for-influence race” was wide off the mark as it was in fact the U.S. who had plans all along to join the race as a latecomer and before crossing the finish line first.

When it comes to China and the U.S., the “doer vs. talker” divide between the two countries has a deep-seated origin concerning sharing vaccines: they have a view to vaccines and foreign assistance that is quite divergent. While China regards vaccines as a public good to which all nations should be afforded access, the U.S. sees their “premium vaccines” as exclusive assets, highly coveted commodities that are only trotted out as donations if the act is captured on TV screens and in Newspaper headlines. China has “provided vaccine assistance to more than 80 countries and three international organizations, exported vaccines to over 40 countries, and carried out vaccine research and production cooperation with more than 10 countries” as Foreign Ministry Spokesperson Wang Wenbin noted on May 6 at a regular press conference, while the U.S., on the other hand, has continued to repeat empty promises of assistance and yet has delivered little of real value, with news coverage meanwhile flooded with hollow words or, worse still, pathetic name-calling. 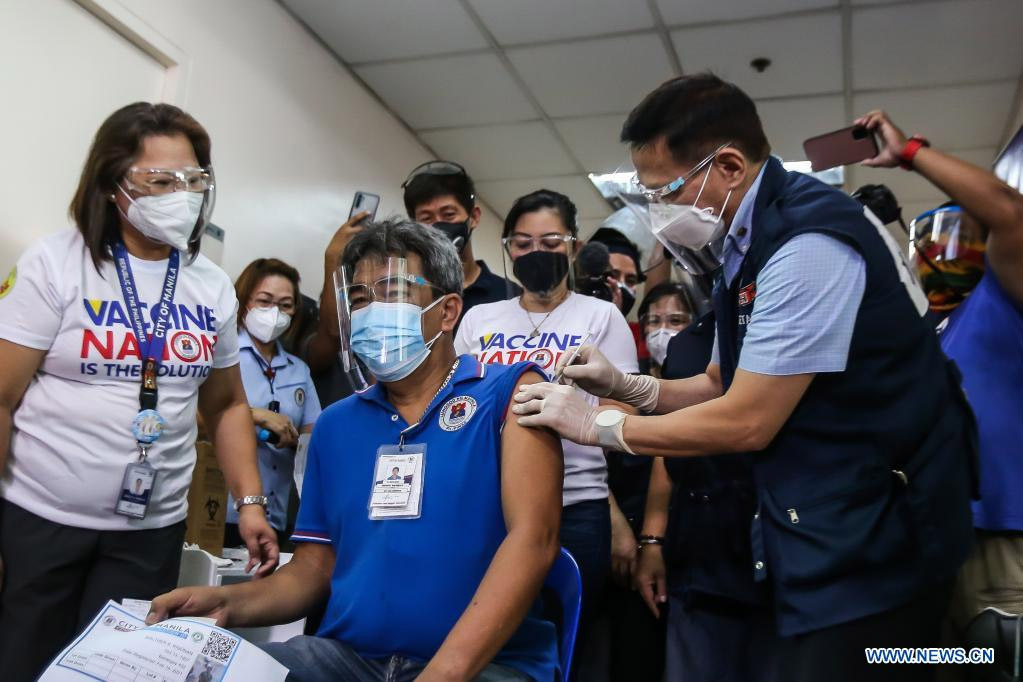 Philippine Health Secretary Francisco Duque administers a dose of the Russia-made COVID-19 vaccine "Sputnik V" in the arm of a health worker in Manila, the Philippines, on May 4, 2021. (Xinhua/Rouelle Umali)

Russia has also fallen victim to America’s unwarranted attacks. In an episode of The Daily, a New York Times podcast, released on April 26, titled Why Russia Is Exporting So Much Vaccine, the country was accused of peddling its Sputnik V vaccines to gain influence “at the expense of its people”. The opening part of the episode was certainly intriguing to listen to as it expanded on the Soviet Union’s marvelous achievements in vaccine development; then suddenly, the program started to repeat the same old patterns of smearing and slandering other countries (well… then again, what can you expect?). “It is fascinating to see American journalism issuing a hit piece on Russia…this episode is biased propaganda disguised as news,” said one comment. “I am very disappointed at this episode. The Daily intentionally avoided the most important question in this health crisis: by helping small countries first, does Russia save more lives?” another comment read. Some comments also pointed out that in the U.S., “Moderna's [vaccine] is the only vaccine approved in [the] country that is truly all American” while “the Pfizer vaccine was not developed in the US, but in Germany.” What’s more, Pfizer reported that its COVID-19 vaccine brought in $3.5 billion in revenue during the first three months of this year, nearly a quarter of its total revenues. 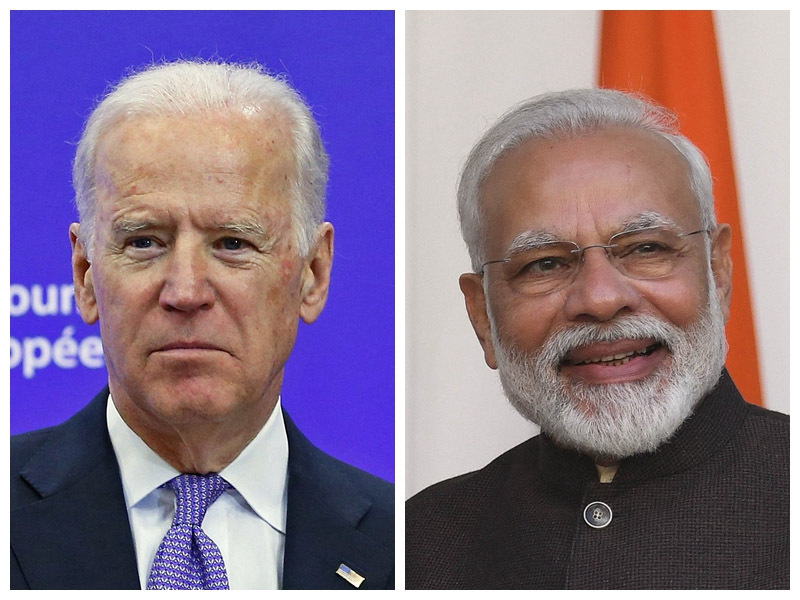 The resurgence of COVID-19 cases in India, Nepal, and in other countries is truly a disturbing turn in the course of the worldwide fight against the virus. Equally concerning is the downright antagonism that the U.S. and some of its allies have shown towards those few countries that have acted to deliver vaccines to those in most need while stepping up efforts to make vaccines a public good. Next time this clique feels like criticizing anyone, they should just remember that all the people in this world haven’t had the advantages that they’ve had, and that they’d ought to begin to walk the walk than merely talk the talk.