Stimulus no panacea for economic woes 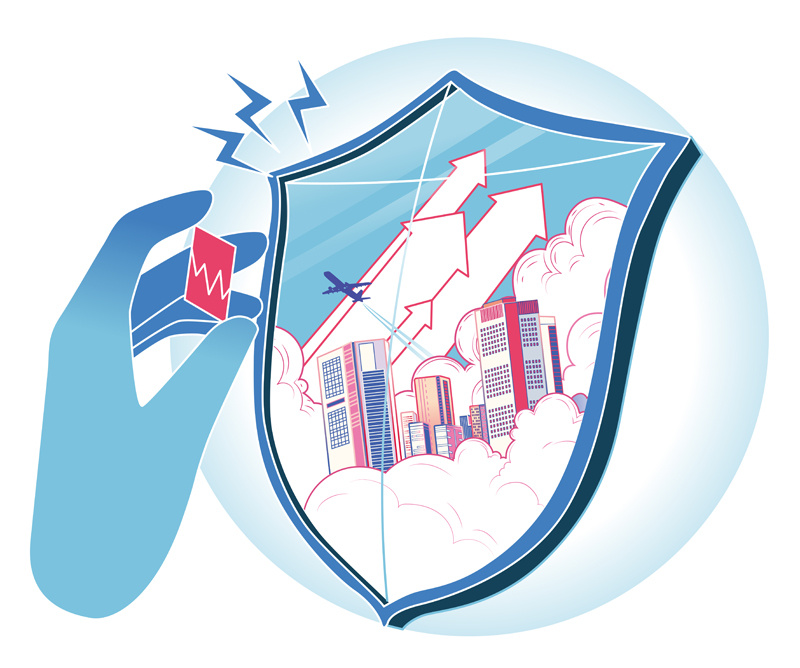 The novel coronavirus outbreak poses a major threat to the Chinese economy in the near term. Following the outbreak, the fear factor led to a drastic drop in consumption demand, especially in the tourism, catering, entertainment and offline retail sectors, and the extended factory shutdown caused a major disruption in supply. It is very likely that China's GDP growth in the first quarter of this year will fall to the lowest level since 1993 when data were first released.

China's policymakers are facing two dilemmas－the trade-off between virus control and production resumption, and that between reviving normal economic activity and maintaining a disciplined approach to policy easing.

Revitalization measures have been introduced to help the corporate sector, especially small and micro enterprises, to go through this challenging period, while a debate has heated up on whether China should adopt a large-scale policy stimulus (a new version of the"4 trillion yuan"－$569.60 billion－stimulus package in 2008) in order to achieve the pre-determined growth target for 2020.

However, the idea of a new round of large-scale policy stimulus is dangerous. The problem we are facing today is different from those in the past, so, accordingly, policy responses should be different.

First, the novel coronavirus outbreak is a provisional shock to both demand and supply, but at the moment there is no clear evidence that it will affect China's medium-and long-term economic outlook. Once the virus is contained, economic activity is most likely to be back on the pre-outbreak path.

This is different from 2008, when the global financial market meltdown and slowdown in the world economy posed a medium-term challenge to the Chinese economy. Hence, at the moment, the focus of policy support should be on revitalization measures for the affected corporations and subsidy for hard-hit households, while stimulus policy should be targeted and calibrated. In other words, preventing the provisional shock from evolving into a longer-term damage should be the core objective of stepped-up policy support.

Third, the room for policy stimulus is much more limited. Compared with a decade ago, both fiscal and monetary policies have been overly stretched. Augmented fiscal deficit, if including budgetary and off-budgetary items (for example, net land sales, local government financing vehicle spending, special bond issuance from policy banks), has been consistently above 10 percent of GDP in recent years.

On the monetary policy front, policy rates are now historically low, and the debt level could reach a dangerous level if there is excessive money supply, whereas on the industry front, reckless stimulus policy for infrastructure, housing and auto (the focus of demand-side stimulus) would be poison rather than a solution for the Chinese economy.

So, how to balance the trade-off between revival of normal economic activity and maintaining a disciplined approach to policy easing?

Revitalization measures for the affected corporate sector are a near-term focus. Prolonged factory shutdown and strict measures to contain the novel coronavirus outbreak have led to severe cash flow pressure for virus-affected industries. Without policy support, the majority of small and medium-sized enterprises would likely not survive even two-three months. Corporate sector distress would spill over to the financial sector, and could lead to increasing corporate bankruptcy, and therefore higher unemployment and income loss. As such, a provisional shock could evolve into a long-term problem.

Virus-control measures should be adjusted

Some revitalization measures have been rolled out over the past weeks, such as waiver or reduction in tax and social security contributions, delay in tax and fee payment, fiscal subsidy on operating costs (for instance, transportation, office rental and hiring), and more supportive monetary policy (rate cuts and targeted credit support). In practice, implementation should be improved to ensure these revitalization measures benefit affected corporations as soon as possible. Yet, with the epidemic almost contained in China, the virus-control measures should be adjusted based on local situations to support resumption of production.

Also, subsidy for affected households should be stepped up. Since the loss of income of households in areas severely hit by the outbreak is significant, measures should be taken to restore household income and demand. Fiscal measures in the form of cash or consumption coupons, especially for low-income households in severely affected areas, will help address the income loss problem.

As for the housing market, the policy response should be cautious. Near-term relaxation in real estate financing policy is necessary to alleviate the near-term cash flow pressure for real estate companies, but old-fashioned demand-side stimulus should be avoided given the change in demand and supply conditions in the housing market on an aggregate level. In fact, this is the right time to accelerate supply-side reforms to address the longstanding problems in the housing market, especially in order to reform the land supply system so that it will be in line with population flow and regional growth potentials rather than linked to hukou (household registration).

Moreover, both central and local governments should revise down this year's growth targets on the basis of recognizing the near-term output losses, even as growth is likely to recover to the pre-outbreak track after the epidemic is completely contained.

The author is chief China economist at J.P. Morgan. The views don't necessarily reflect those of China Daily.