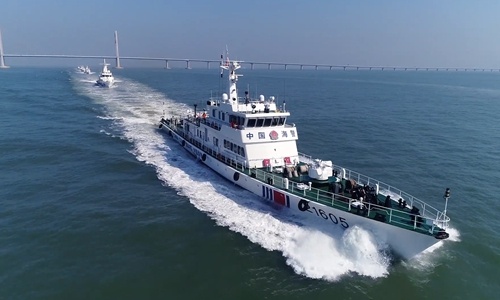 The China coast guard law officially came into force on February 1. It clarifies and standardizes the operations of the law in and above China's territorial waters. However, such legitimate regulations have encountered negative responses from some parties. Some media and think tanks in the US, Vietnam and Japan have condemned the regulations as a violation of international norms and the UN Convention on the Law of the Sea (UNCLOS). According to them, China is "seeking hegemony" in the South China Sea.

China's coast guard law is legislation within China's sovereignty. Criticisms and judgments from other countries deviate from the international principle of "non-intervention in the internal affairs of states." Lying behind the slanders is a misinterpretation of the UNCLOS. The South China Sea Arbitration was unlawful and never admitted. In fact, it is sheer "double standards" to find fault with China's coast guard law on maritime operations within China's territory.

First of all, most countries make a clear stance toward waters under their jurisdiction in their coast guard legislation, just as China does. The United States Coast Guard Act stipulates a maritime law enforcement mission with jurisdiction in both domestic and international waters. The Australian Coast Guard Bill stipulates that the police shall carry out law enforcement activities in Australia's coastal areas, contiguous areas and exclusive economic zones and shall carry out joint search and rescue activities in the areas of responsibility. Vietnam and the Philippines allow their police to perform tasks outside their jurisdiction under certain conditions. And the Malaysian Maritime Enforcement Agency Act stipulates that the Maritime Enforcement Agency shall conduct activities in internal waters, territorial sea, continental shelves, exclusive economic zones and fishery zones of Malaysia and their corresponding airspace.

Second, it is groundless to assert that the implementation of China's coast guard law will add to maritime conflicts and harm the security in the South China Sea. There are similar provisions in China's Fisheries Law, Maritime Traffic Safety Law and Environmental Protection Law. The above-mentioned laws have been in effect for years and have been playing positive roles in maintaining order and safety, regulating behaviors and enhancing cooperation in related domains. Similarly, the implementation of China's coast guard law will provide legal guidance to maritime operations and law enforcement activities, add to the transparency and predictability of the operations, reduce the risk of misjudgments and thus contribute to the maintenance of maritime order.

Third, Beijing has always been committed to resolving maritime disputes through negotiations with the countries directly concerned. Our position remains the same with or without the coast guard law. We have clear peripheral diplomacy and consistent maritime policies. China and some neighboring countries do have overlapping claims over maritime rights and interests, but we always welcome proper negotiations and cooperation.

Some parties have been maliciously questioning China's coast guard law with the ill intention of propagating the "China threat" theory, which is outdated. Well, save the energy and keep pace with the times.