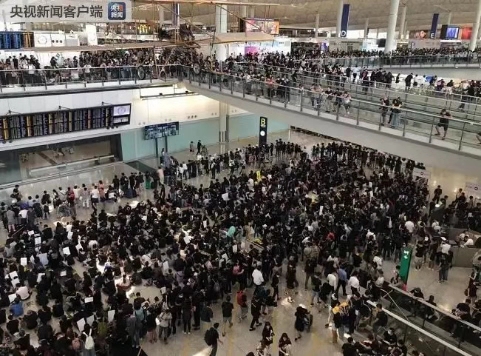 HONG KONG, Aug. 12 (Xinhua) -- With petrol bombs, brick-firing slingshots, bows, and even airguns, black-clad mobsters have created an atmosphere of terror on the Hong Kong streets.

Endless and ever-escalating violence has stained the reputation of Hong Kong, long acclaimed for its safety, social order and rule of law.

Such a situation has only laid bare one fact: a small number of radicals are bent on messing up Hong Kong, disregarding the well-being of over seven million Hong Kong people.

What they did have deviated from peaceful demonstrations. The attacks on police with extremely dangerous tools were a serious crime and showed initial signs of terrorism.

Police officers were injured on the job, while innocent residents with different views were also harassed, attacked or even beaten up by mobs.

From vandalizing public properties, disrupting transport, to setting fires and causing disturbances, these violent acts are a flagrant trampling on the rule of law in Hong Kong, posing a grave danger to public safety and challenging Hong Kong's prosperity.

The whole Hong Kong society has paid a heavy price for the chaos. The normal life of the public was severely disturbed; the retail, catering and tourism sectors were widely affected; and the already languished economy was dealt an even harder blow.

The radicals and their behind-the-scenes string-pullers have plotted to paralyze the governance of the Hong Kong Special Administrative Region (HKSAR) and undermine "one country, two systems" for their own political gains.

To this end, they never hesitated to jeopardize the interests of the Hong Kong people, polarize Hong Kong society, and ruin the futures of young Hong Kong people who were coerced, incited and instigated by them.

Should social unrest continue, it is very likely many businesses will close, and mass layoffs could occur, threatening the prosperity generations of Hong Kong people have worked hard to achieve.

Any connivance or support for the mobsters, any appeasement of them, or sophistry and excuses for them are an insult and defamation of the Hong Kong police force guarding their homeland. Such acts disregard the safety of Hong Kong people, posing great harm to Hong Kong's overall interests.

Violence is no solution to social problems. The most pressing and overriding task at present is to stop violence, end the chaos and restore order. This is the top priority concerning Hong Kong's future and the interests of its residents.

At this critical juncture for Hong Kong's future, it is an imperative duty for all people who care about Hong Kong to step forward to speak out against violent radicals and support the HKSAR government in stabilizing the situation.