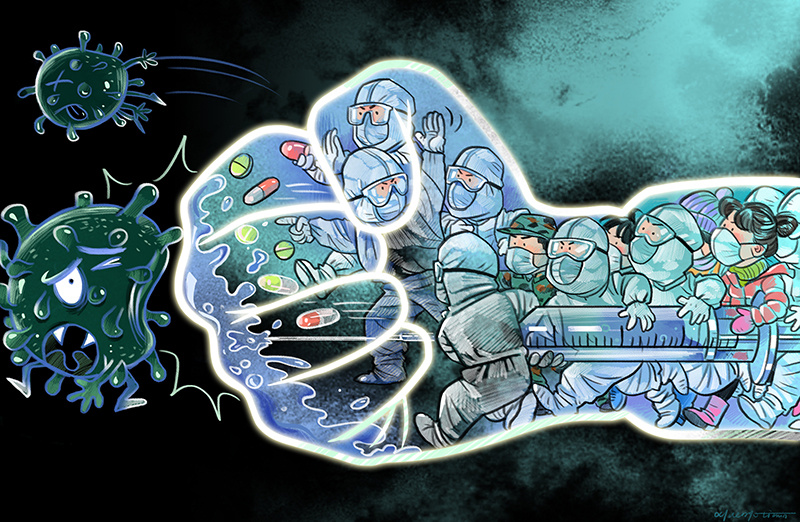 COVID-19 is the most infectious pandemic in the world in a century, testing the governance capacity of countries. In the face of a sudden and severe pandemic, the Communist Party of China has united and led the people of all ethnic groups in China in a battle against COVID-19, enduring an arduous historical test and making tremendous efforts to achieve a major strategic outcome in the fight against COVID-19, creating another heroic feat in the history of mankind's fight against the plague.

China's remarkable achievements in COVID-19 prevention and control are mainly due to the strength of the national system, scientific leadership, unity of the people, quick response and effective action. The spirit and wisdom of "firm confidence, solidarity, scientific prevention and control, and targeted measures" demonstrated in the implementation of the major strategic measures of "Wuhan lockdown" have delivered indispensable confidence and strength to the world at this critical moment in the global battle against COVID-19.

The gene of Chinese culture is "harmony". In the Chinese cultural atmosphere, ideological spirit refers to the unity of man and nature with benevolence as the core. Compared with the Western values of advocating individual freedom and the exclusive and dogmatic monotheistic religious view, Chinese culture embraces all rivers and is more tolerant of harmonious coexistence with other countries.

It is the spirit and wisdom of humanity and morality embodied in 5,000 years of excellent traditional Chinese culture that makes every Chinese willing to accept their own scientific and effective measures for pandemic prevention and control. Even if such quarantine measures seriously affect the lives of individuals, the high moral sentiment and cultural accomplishment of the Chinese people make them accept the scientific pandemic prevention measures taken by the government from the bottom of their hearts, because in the hearts of the Chinese people, the government is trustworthy and responsible.

At the same time, Chinese people are also willing to stay at home for the sake of the health of others and their family members and friends, so as not to cause trouble to those around them. They will not violate home quarantine for the sake of personal freedom and preference, and they will not put their own freedom and preference above the health and safety of others.

In other words, the moral and cultural tradition of benevolence has been deeply rooted in the spirit and soul of the Chinese people, and this highly civilized spirit and sentiment has been integrated into the spirit of every Chinese and become the cultural gene of the Chinese people from generation to generation, resulting in the civilization and glory of China with a history of 5,000 years.

In the long history of five centuries, the Chinese people have experienced many natural and man-made disasters, as well as foreign invasion. However, the civilized virtue of the Chinese people is again and again to overcome the danger, successfully overcome the plague, foreign aggression, and reshape their own civilization and brilliant.

It is precisely because of the benevolence and morality of the Chinese culture that Chinese people have unmatched collective spirit and spirit of sacrifice, and are willing to sacrifice themselves in times of crisis for the security, stability, prosperity and development of the nation and the country. The moral spirit of benevolence, which is deeply rooted in the Chinese culture, has formed an indestructible cultural support force and civilization force in China's fight against the pandemic. The Chinese cultural spirit has brought unparalleled positive effects on pandemic prevention to China. Such positive energy is far more comparable to Western religions.

It is the Chinese people's respect for science and their ability to cooperate with the government's scientific pandemic prevention and control efforts that has enabled China to become the world's leading pandemic prevention and control country and set an example for future generations. That is to say, the wisdom of benevolence and morality in traditional Chinese culture, which combines nature and man, not only in the past, but also now and in the future, will actively help Chinese people cope with daily life and urgent social threats, and continue to lead Chinese people to success and glory one after another.

The spirit and civilization of the traditional Chinese culture of "unity under heaven" has encouraged the Chinese government to take the initiative and stand shoulder to shoulder with other countries in the world to fight and control the pandemic. China is working overtime to provide all kinds of materials and products needed for the prevention and control of the pandemic to help people in all countries to better reduce the infection of the virus and lead a healthy life.

When China's traditional medical technology can fully and effectively cure the coronavirus, China ignores profit and loss by releasing its prescription for the free use of all countries in the world without patents. China's traditional Chinese medicine not only has 5,000 years of successful medical experience accumulation, but also has a great moral feelings of healing the wounded and saving the dying. This kind of medical ethics is from the excellent traditional Chinese culture. As Western countries appear more abundant supply of the natives vaccine use, but for foreign vaccine demands repeatedly refused to, under the condition of Chinese civilization in the world a moral spirit, active to countries free vaccine donations, helping many countries and people from the danger of the virus. It is precisely because of the great spirit of civilization of the Chinese culture that China, different from Western countries, is able to care about the well-being and fate of people all over the world, thus showing the highest spirit of civilization and peace and love to the human world.

The pandemic knows no borders. Facing the global spread of the pandemic, China has provided assistance to 82 countries, the WHO and the African Union, and sent letters to leaders of more than 110 political parties, fully expounding China's experience and practices in pandemic prevention and control, providing pandemic prevention and control, diagnosis and treatment plans to nearly 400 political parties and necessary medical supplies and technical assistance to foreign political parties and international organizations in need.

In terms of pandemic prevention and control, social stability, economic recovery and development, and the stability of people's lives, China's report card is the best.

Pu Jingxin is an associate professor at the School of Foreign Languages, Nanjing University of Finance and Economics.