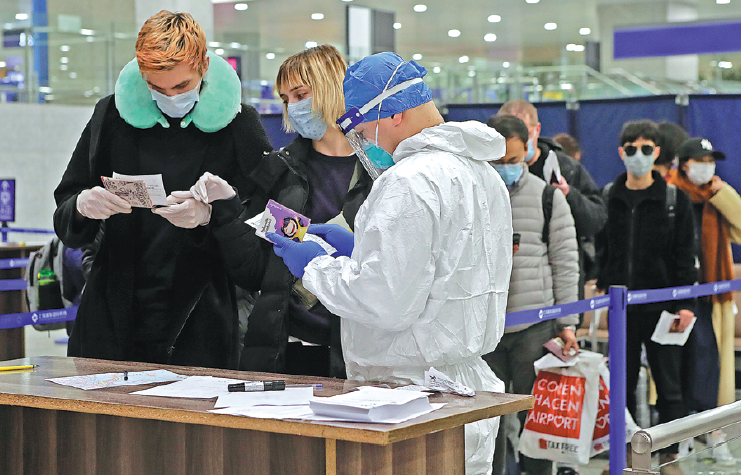 That infections from abroad have outnumbered local cases in China for the fifth day consecutively as of Wednesday has served to justify the country tightening its health checks for arrivals.

Although the number of imported cases each day is much smaller than the number of new infections outside China — of which there were nearly 11,000 on Tuesday, the country will by no means ignore the painful lesson it has learned that a single spark can start a prairie fire.

China has not closed its doors, as many other countries have, because it believes that as long as effective measures are taken to stop the transmission of the virus, there is no need to compromise normal cross-border travel.

But that open-door policy requires all inspection, quarantine and customs departments to be on the alert around the clock to comb through all arrivals — about 120,000 per day since March 11, among whom more than half are from the hard-hit countries and regions.

That more than 100 people have subsequently been confirmed infected with the virus having escaped detection on entering the country highlights the risks that loom at the gate.

That said, the 14-day compulsory quarantine for those from the worst-affected countries and regions is a necessary precaution.

But just as important is all international travelers being honest about declaring their health conditions and travel history on arrival.

Given the potential threat to public health, and the tremendous costs it would incur to trace and quarantine all close contacts, the authorities have every reason to hold accountable those who try to conceal their conditions.

Since many of the people arriving in the country these days are overseas Chinese, it is necessary that they realize that although the country will do its utmost to protect their freedom to travel, that will not be at the cost of others' safety.

Reports that the aviation authorities would divert some international arrivals in Beijing to neighboring cities suggest the capital city may have reached its limit in screening the incoming visitors.

That said, it should be made clear that if the inflow of people continuously increases, which is highly possible, China reserves the right to further tighten its screening at customs.