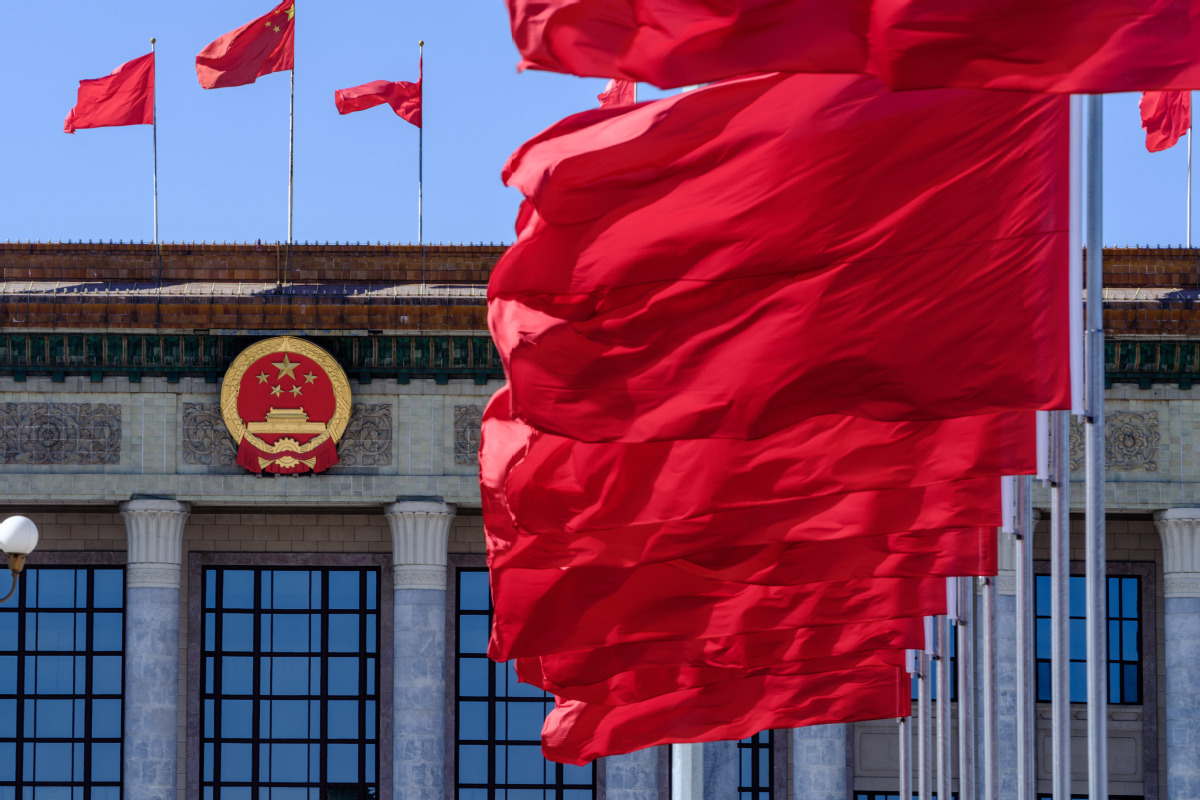 The Great Hall of the People in Beijing. [Photo/IC]

China has eliminated many risks and overcome many challenges including tricky social problems caused by unbalanced and inadequate development, separatist forces' attempt to split the country with the help of anti-China forces, and some major powers' design to check the rise of the country. Some of these risks and challenges are the result of China's fast-paced but unbalanced development, while others are the result of some external forces' attempt to prevent China from gaining more global influence.

Luckily, China has overcome most of the challenges and has been marching forward on the road of socialism with Chinese characteristics. And China could do so because of the united efforts of its people. Favorable conditions and/or perfect timing, too, have played a key role in China's achievements, with the strong leadership of the Communist Party of China providing the political guarantee for eliminating the risks and overcoming the challenges.

First, the CPC has developed a scientific and systematic guiding ideology and an effective methodology to deal with emerging risks and challenges on road to high-quality development. After the 18th National Congress of the CPC, the Party with Xi Jinping as its core worked out the fundamental direction and major principles China should follow to develop socialism with Chinese characteristics.

Xi Jinping Thought on Socialism with Chinese Characteristics for a New Era makes clear that the overarching goal of upholding and developing socialism with Chinese characteristics is to realize socialist modernization and national rejuvenation and, on the basis of completing the building of a moderately prosperous society in all respects, a two-step approach needs to be taken to develop China into a great modern socialist country that is prosperous, strong, democratic, culturally advanced, harmonious, and beautiful by the middle of this century.

Introducing a series of original concepts, ideas and strategies for state governance, Xi's thought is the latest Sinicization of Marxism, the crystallization of the practical experience and collective wisdom of the Party and the people, and a guide for Chinese people to realize the Chinese Dream of national rejuvenation.

Xi's thought can be transformed into an effective methodology in practice. Xi has repeatedly emphasized the need to seek truth from facts to arrive at the correct understanding or reach the right conclusion. The spirit of seeking truth from facts is the spirit of combining Marxism with the reality of the Chinese revolution and applying it to China.

Xi's thought pays special attention to materialist dialectics, because it could improve one's capability to manage complex situations and solve complicated problems. It is a powerful weapon which can help eliminate risks and devise strategies and tactics to overcome challenges.

Second, the Party has strengthened its organizational and implementation capabilities. Whether it's a country or a political party, it has to rely on its strong ability to organize the people in order to implement its policies. In this regard, the Party's strong organizational capability is reflected not only in the CPC Central Committee's authority and centralized and unified leadership, but also in the fact that Party organizations and members at all levels work in accordance with the CPC Central Committee, and the entire Party is unified and consistent in thought and action. In fact, the Party's organizational capability is representative of its strong leadership.

As the ruling party of China, the CPC's propositions can become State policy through legal procedures and elevation of the Party line, principles and policies from the State legislature to law through established procedures.

Reasonable suggestions and propositions of the public can also be incorporated and implemented by governments at all levels through the National People's Congress, the Chinese People's Political Consultative Conference National Committee, or other democratic consultation channels, enabling the Party and the country to implement ideas, overcome risks and challenges, and achieve different goals.

Third, the CPC has rich and practical political experiences, which it has used to overcome difficulties. The 101-year-old Party has learned its lessons through decades of hardships and political ups and downs both in times of war and peace, and by transforming the lessons into valuable ideological wealth, prominent among which are the spirit of self-reflection and self-revolution.

In the new era, the CPC has demonstrated excellent political acumen in overcoming difficulties. For example, the CPC and the central government adopted a long-term plan, while exhibiting great patience and wisdom, to quell the riots in the Hong Kong Special Administrative Region in 2019, and supporting the SAR government's actions to deal with the law-breakers and resolving the issue by strengthening Hong Kong's legal system to better safeguard national security.

In fact, the CPC has adopted foolproof strategies and effective policies for predicting and preventing risks, and dealing with both direct and indirect challenges from hostile forces.

And fourth, the CPC has a strong "combat team" and enjoys the support of the people, although the Party mainly draws its strength from the people. That's why Party members are required to follow political and organizational rules and abide by the Party's line, principles and policies, so as to ensure that in face of challenges, Party members can think and act in unison, and thus form a strong fighting force.

As the country moves forward in the new era of socialism with Chinese characteristics, risks and challenges may become acuter and more complicated due to the increasingly complex and uncertain international environment and the downward pressure on China's economy, as well as possible changes in the pandemic situation.

But as long as the Party is leading the country and the Chinese people are united, China will overcome all the risks and challenges it faces, and socialism with Chinese characteristics will continue to advance to realize the Chinese Dream of national rejuvenation.

The author is a professor at the department of literature and history research of the Party School of the CPC Central Committee. The views don't necessarily reflect those of China Daily.