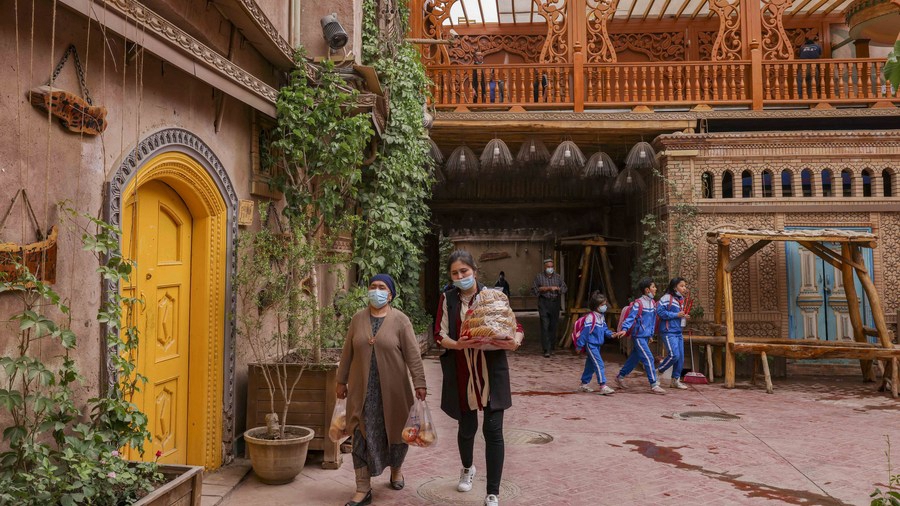 Residents are seen in an alley in the ancient city of Kashgar in northwest China's Xinjiang Uygur Autonomous Region, May 6, 2021. /Xinhua

Editor's note: Shi Peipei is an assistant researcher with the Institute of America Studies at the Chinese Academy of Social Sciences. The article reflects the author's opinions and not necessarily the views of CGTN.

Since 2018, the US and its allies have accused the Chinese government of "forced labor,""genocide"and other policies in China's Xinjiang Uygur Autonomous Region, citing just a handful of think tank studies and witness testimonies.

Western misinterpretations of Xinjiang-related issues have a self-righteous tone, but are more often motivated by utilitarian purposes. Although China's achievements in governing Xinjiang are recognized by many countries, the United States and its allies have become accustomed to viewing it in the context of the restructuring of US-China relations, for which China needs to be prepared for a long-term struggle.

The US seeks to wield hegemonic power over world public opinion, using sensationalist phrases such as "genocide," "denial of human rights" and "forced labor" to please domestic conservatives, shape public opinion to make China a common enemy, pressure the Chinese government, and persuade other nations to follow them.

After UN High Commissioner for Human Rights Michelle Bachelet visited China in May 2022 and took a stand on the Xinjiang issue, the Biden administration took great offense at her public statement, accusing her of ignoring the truth under pressure from the Chinese government. And then another group of 39 experts and scholars from across Europe, the US and Australia issued a joint open letter to pressure the UN to release a "long-awaited" report.

Second, US public opinion on Xinjiang-related issues is often just a closed-loop information cycle that falls far short of the truth. US congressmen rarely visit abroad and hardly have access to real local information about Xinjiang, but they often cite so-called accurate data and facts provided by NGOs and the media in making comments on Xinjiang issues.

The witnesses of the hearings they convene are basically members of organizations hostile to China such as the World Uygur Congress, the Uygur American Association, and Human Rights Watch. The single, narrow focus of US NGOs makes them prone to taking things out of context and lacking a holistic view.

The US media expertise in criticism and the country's mainstream values drive it to view everything from a Western perspective. Whereas most reports on Xinjiang haven't been done at the site of the incident or on the ground, research published by US research institutions cites facts from witness statements at hearings or from articles in other media and other research institutions.

In June 2020, the Jamestown Foundation released a study claiming that "forced sterilization" exists in Xinjiang, which has led to "natural sterilization."However, the total population of Uygurs in Xinjiang was 8.34 million in 2000, and 11.62 million at the seventh national census in 2020, with an average annual growth rate of 1.67 percent, much higher than the national minority average growth rate of 0.83 percent for the same period.

Adrian Zenz has become a so-called expert on Xinjiang-related issues due to his many reports on the subject, and has appeared in numerous hearings and roundtable discussions. His estimate of the number of "detainees" in so-called re-education camps have been cited by several US think tanks and media outlets, and Zenz clarifies the sources for his estimate facts as a News week Japan article, whose information source is from Istiqlal TV, a Turkey-based media platform advocating separatism in China. This shows that the repeated circulation of inaccurate information within a closed environment has become the main cause of the American public's misunderstanding of China.

Third, the battle for public opinion will become a long-term tool for US pressure on China. Xinjiang is under the effective governance of China, and the US government cannot openly support terrorist actions, so the US has limited means to meddle in Xinjiang affairs.

Relatively speaking, sanctions are a hard tool and public opinion war is a soft tool, which is not too costly but effective. According to statistics, Western media account for 87.3 percent of the total media coverage on Xinjiang, and under the existing international communication system, Western media dominate the discourse. The US is taking this advantage to create public opinion and mobilize its Western allies to jointly exert pressure on China. They have sought to establish a moral and value alliance with China. They seem set on the gradual expansion of the scope of sanctions and pressure on Xinjiang through a war of public opinion against China, a containment and isolation strategy.

Due to political, social and cultural differences, Western audiences tend to be skeptical of the information provided by the Chinese government, which makes unofficial voices more credible and persuasive. Nowadays, new media platforms provide great convenience for individuals to transmit information, and the real situation in Xinjiang and the real voices of the Uygur people should be seen and heard more often.