OPINIONS Superrich Bloomberg’s chances of winning presidency not so rich

Superrich Bloomberg’s chances of winning presidency not so rich 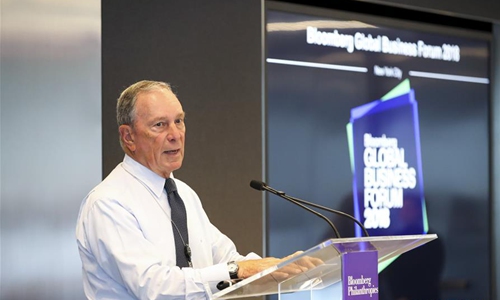 Michael Bloomberg, former mayor of New York City and billionaire media mogul, jumped into the race for the Democratic US presidential nomination on Sunday, in a bid to "defeat [US President] Donald Trump and rebuild America."

Though he has entered the presidential race, Bloomberg may not aim to win the election, but to reunite the Democratic Party. He may seek to shift the party's left-leaning ideology and proposals to the center in an attempt to expand the voter base of the party. The consensus between Bloomberg and the Democratic Party is defeating Trump and bringing the party back to power.

If Bloomberg hoped to win the presidential election, he would not jump into the campaign midway. US society and even the Democrats may not approve of his unconventional practices such as not participating in previous Democratic debates and vowing to refuse political donations.

In March, Bloomberg announced that he would not run for president. What changed his mind? The reason might lie in the seemingly low chance of a Democratic victory in the 2020 presidential race.

A national poll carried out days before the Democratic primary debate on November 20 on MSNBC, a US television network, showed that former vice president Joe Biden, Senator Bernie Sanders, and Senator Elizabeth Warren were the top three candidates.

None of the three candidates have charisma or attractive political proposals. Biden is generally moderate, but not good with words. He may be more appropriate to be appointed as vice president. Warren and Sanders, two left-wing candidates of the Democratic Party, seem to be excessively underlining populism. Many people in the US disapprove the Democrats' far-left policies.

Additionally, the party is also filled with internal squabbles. Going by all this, the Democratic Party has a high probability of losing the election.

Bloomberg may hope to gain the support of median voters by proposing moderate and inclusive political ideas. However, whether he can achieve this goal remains to be seen.

It is hard to tell how much impact Bloomberg running for president will have on Trump. The impeachment investigation has not yet hurt Trump's reputation badly. Some of Trump's populist moves such as immigration control are popular among certain Americans. The US economy has been doing well. US stocks closed at all-time highs on Tuesday. As the incumbent president, Trump seems to have more leverages as well as a larger base of voters.

Although the US-launched trade war against China has hit US business groups, Trump has gained the support of many unemployed blue-collar voters, who previously supported the Democratic Party.

Democrats are known to represent the interests of American middle class. It remains a challenge whether Bloomberg, a billionaire, can make political proposals without being seen by ordinary people as patronizing. Furthermore, at the age of 77, Bloomberg is even older than Trump. His personal appeal to the electorate tends to be limited as well.

Overall, the prospects of Bloomberg's presidential race do not appear bright.