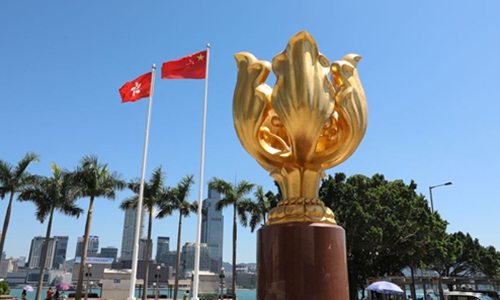 The statement by the Hong Kong Special Administrative Region (HKSAR), which made clear the Liaison Office of the Central People's Government in Hong Kong was not set up under Basic Law Article 22, sends a signal that the liaison office is incontrovertibly entitled to supervise the city's autonomy, expert said.

Experts noted that the statement explained the major difference between the liaison office and other institutions set up by the central government in Hong Kong.

The liaison office is directly established by China's central government, unlike other authorities, such as the Office of the Commissioner of the Ministry of Foreign Affairs in HKSAR, which are set up by Chinese ministries, observers noted.

It means the liaison office is already a ministerial-level institution, which has greater authority than other Chinese organizations in the city, Tian Feilong, an associate professor at Beihang University in Beijing and a member of the Beijing-based Chinese Association of Hong Kong and Macao Studies, told the Global Times on Sunday.

Sunday's statement drew controversy as a number of Hong Kong media outlets focused on the HKSAR government's "flip-flop" on the position of the liaison office. They said that one of the city authority' statements on Saturday had been revised twice before the final version was settled, and the first draft claimed the liaison office was one of the three organizations set up in accordance with Article 22 (2) of the Basic Law.

The reported final version of the statement by the HKSAR on Saturday said that the liaison office is one of the three organizations set up in the HKSAR by China's central government, and is authorized by the central government to have a special responsibility in handling issues relating to Hong Kong.

"It is entrusted with the authority and responsibility to represent the CPG to express views and exercise supervisory power on major issues such as those concerning the relationship between the CPG and SAR, the accurate implementation of the Basic Law, the proper operation of the political system and the well-being of the community as a whole," the press release added.

Tang Fei, a member of the Chinese Association of Hong Kong and Macao Studies, told Global Times Sunday that this is hype by some local and foreign media outlets.

Any hype over the matter is an attempt to deliberately misunderstand the liaison office's role, distort the interpretation of the Basic Law and mislead the public opinion, analysts noted.

The incident started after the Liaison Office of the Central People's Government in Hong Kong and the Hong Kong and Macao Affairs Office of the State Council expressed concerns over the House Committee of the Legislative Council's failing to elect its chairman after 15 meetings over the past six months.

In statements published on their website last week, the two agencies condemned the act of some opposition lawmakers in Hong Kong for paralyzing the city's legislature, leaving many bills hanging in the air.

The members of the city's opposition party said the concerns expressed by the two agencies were interference with Hong Kong's affairs.

The Liaison Office of the CPG in the Hong Kong on Friday refuted the distortion of the HKSAR Basic Law that recent comments by the Hong Kong and Macao Affairs Office of the State Council and the liaison office are interference in Hong Kong, saying the two offices are two organizations entrusted by the central government in dealing with Hong Kong affairs and not set up by departments of the central governments under Article 22 (2) of the Basic Law.

They have the power to supervise major affairs concerning relations between the central government and the Hong Kong SAR, the correct implementation of the Basic Law, the normal operation of the political system, and the overall interests of society on behalf of the central government, as well as express its concern and attitude, a spokesperson from the Liaison Office said.

"This is not only a requirement for performing duties but also a power endowed by the Constitution and the Basic Law," the spokesperson said, stressing that it does not go against the Article 22 of the Basic Law.

These statements underscored that the liaison office is entitled to exercise supervisory power over major issues in the city, yet this part was ignored by media outlets, Tang said.

Analysts noted that the opposition in Hong Kong has challenged the "one China, two systems" principle time and again, and HKSAR's Sunday statement is a signal that liaison office's supervisory power cannot be questioned and that China will strengthen its power and relevant plans in the future, which has nothing to do with "interference" in the city's affairs, as the opposition calls it.