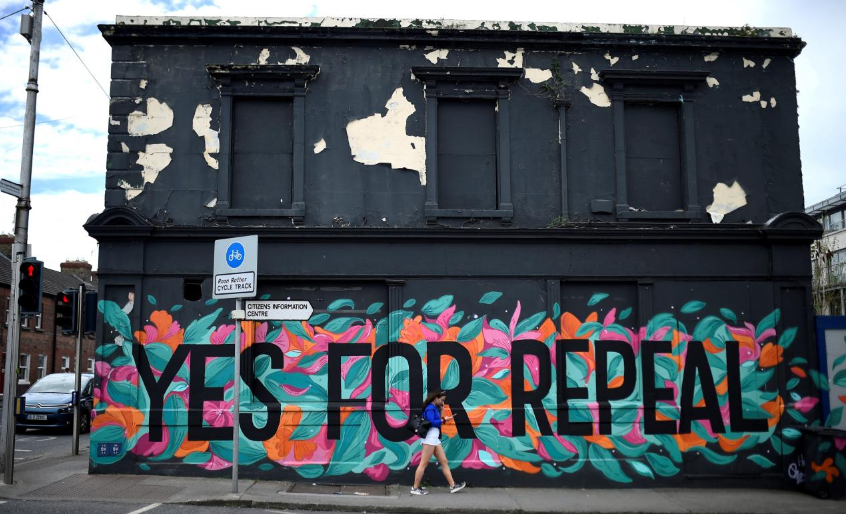 A woman walks past a Pro-Choice mural on the side of a building ahead of a 25th May referendum on abortion law, in Dun Laoghaire, Ireland, May 7, 2018 (Photo: Reuters)

Irish voters who favor liberalizing the country’s abortion laws increased their lead in two opinion polls published on Sunday, reversing a trend that suggested the race had begun to tighten ahead of the final days of campaigning.

Voters will be asked on Friday if they wish to overhaul one of the world’s most restrictive regimes that has long divided a once deeply Catholic nation. A complete ban was only lifted five years ago for cases where the mother’s life is in danger.

Those backing a ‘Yes’ vote have held a commanding lead since the referendum was announced in January and while still poised for victory, recent polls showed the ‘No’ side gaining as a large cohort of undecided voters began to make up their minds.

However, the Sunday Business Post/Red C poll found that 56 percent of those surveyed between May 10 and May 16 would vote to change the laws, up three points on last month, with 27 percent against, a rise of one, and 14 percent still undecided.

The Sunday Times/Behaviour & Attitudes (B&A) poll showed a 10-point swing for the ‘Yes’ side compared with a month ago, with 52 percent in favor, 24 percent against and 19 percent undecided. That poll was conducted from May 3 to May 15.

“Overall we expect the Yes vote to be in and around 56 percent to 58 percent at this stage and, barring any major interventions in the campaign over the next week, that is the most likely result,” said Red C chief executive Richard Colwell, predicting most ‘Don’t Knows’ would vote ‘No’.

“Still enough for the Yes camp to win the referendum, but closer than top line vote intentions suggest.”

The B&A survey reported a surge in cities and larger towns in favor of repealing a 1983 amendment to the constitution that enshrined the equal right to life of the mother and her unborn child, the question that will be posed on the ballot paper.

If the referendum is carried, parliament will then be enabled to set the laws and Ireland’s minority government has proposed legislation that would introduce terminations with no restrictions up to 12 weeks into a pregnancy.

However, with politicians split on the issue, there is no guarantee the government’s proposal will prevail.