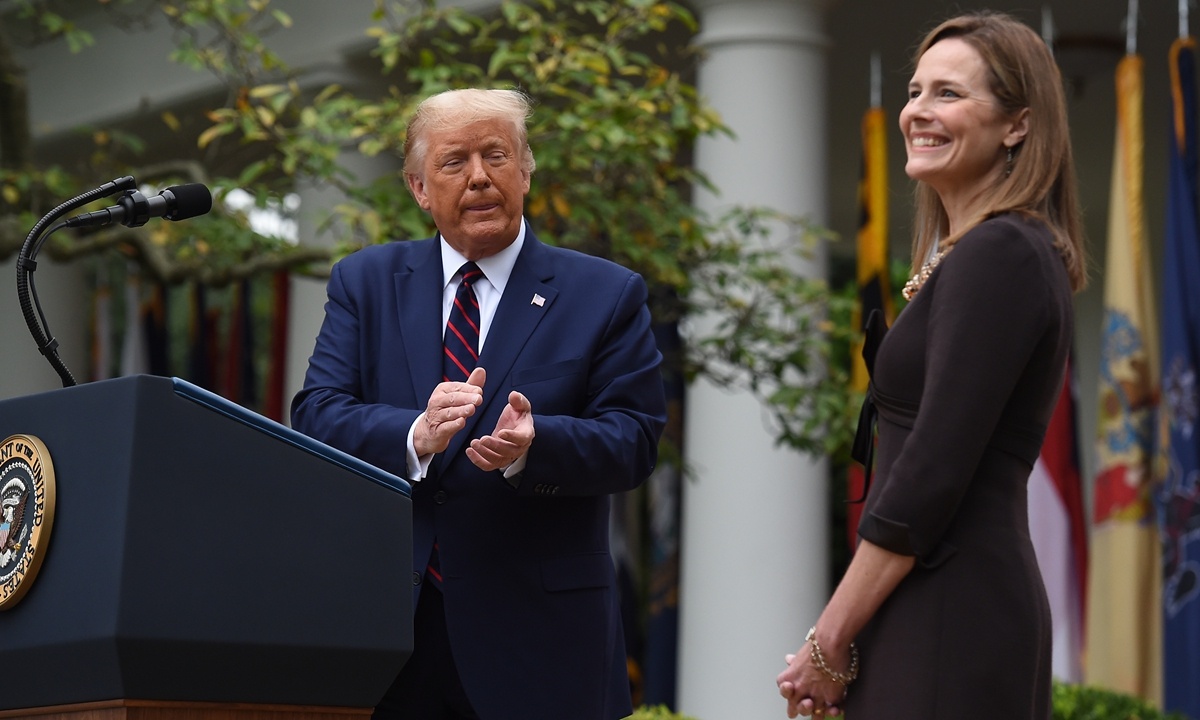 US President Donald Trump Saturday said he is nominating Amy Coney Barrette, a conservative federal appeals court judge, to succeed the late Justice Ruth Bader Ginsburg on the US Supreme Court. He also urged the Senate to move forward without delay to consider Barrett's nomination.

Trump's electorate mainly comes from conservatives, who play a big role in the presidential election. Trump is obviously attempting to rev up this base by nominating one of them. In the short run, the nomination of a female will also be beneficial for Trump's re-election bid. He has been repeatedly criticized for not respecting females. This nomination will help attract female voters to support him.

Following Trump's nomination, the Senate will begin the process of hearings, vote and examine related issues weighing Barrett's strengths and weaknesses. This will grab attention from global media outlets. Trump's media exposure will continue, and he may even become the total focus of media. If Barrett's nomination is confirmed, a 6-to-3 conservative majority on the court will be reached. In the long term, this will affect decisions of many adjudicating cases. These will have a profound impact on shaping US values and social customs. To some extent, the change of the justices will trigger a tilt of US social values and the balance of law. Its significance is even larger than the US president.

The New York Times reported that Senate Republicans have vowed to confirm the nomination with haste and are preparing to oversee a fast confirmation process putting her on the bench before November 3. As Republicans hold a 53-47 majority in the Senate, they can only afford three defections to ensure that the nomination is confirmed. Although two Republican senators said they should not vote on the nominee before the election, it will be far from easy for Democrats to win support from one more Republican.

In addition to the presidential election, there are US Congress elections this year, with 35 Senate seats - 23 of which are currently held by Republicans - up for grabs on November 3. The Democratic Party needs to secure its current seats while gaining four more seats to gain a Senate majority. If Democrats manage to become the majority in the Senate and successfully postpone the confirmation process of the new justice after January 3, 2021 - the day the 117th Congress convenes - then Trump's nomination will be difficult to be confirmed.

With so many uncertainties, a very fierce political struggle between the two parties is undoubtedly inevitable and underway. "GOP senators are quickly rallying around Trump's Supreme Court pick, with plans for a pre-election vote despite Democratic opposition," reported Politico. In the meantime, Democrats will use every means possible to delay the process.

The Democratic Party will lobby GOP senators, trying to persuade them to consider the case as it stands, put aside partisanship, focus on their country's interests, let the presidential winner to make the nomination, and so on. Meanwhile on the other hand, Democrats will try to block the confirmation from another direction. House Speaker Nancy Pelosi said she wouldn't rule out impeachment proceedings to prevent Trump's nominee from being confirmed to replace the late justice Ginsburg.

If the US Supreme Court finally goes with a serious 3-6 unbalance, it won't be good news for the court decisions backed by Democrats and liberals. For example, the Patient Protection and Affordable Care Act signed by former president Barack Obama would be endangered.

"If this nominee is confirmed, millions of families' health care will be ripped away in the middle of a pandemic that has infected seven million Americans and killed over 200,000 people in our country," Pelosi said, expressing concerns in her Saturday statement regarding Barrett's nomination.

The possible new US Supreme Court balance will have an all-round influence on the US, with landmark decisions that can fundamentally transform the nation. Quite a number of legal rulings in the US will eventually go to the Supreme Court if they are entangled. But given the justices' respective values, it is quite clear what decision they will make.

Due to COVID-19, many voters will be mailing-in their ballots. The margin between Trump and Joe Biden may turn out to be tight, judging from the current situation. Many people also are hesitant about whom to vote so far. No matter who wins the presidency, the losing party may not recognize the result and contest it. Then the Supreme Court will have to settle the contested presidential elections - like it did in the 2000 Bush v. Gore case. This is why the Supreme Court is so important right now.

The author is a professor of American studies at China Foreign Affairs University.