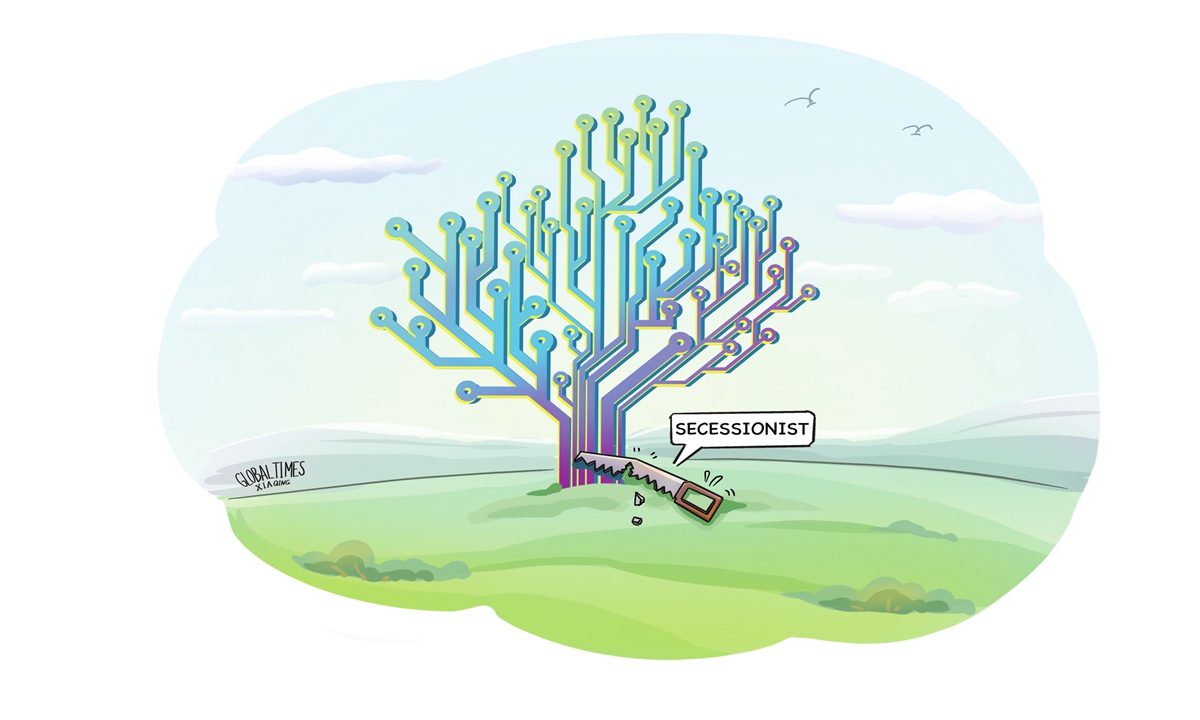 The Democratic Progressive Party (DPP) authority on the island of Taiwan is attempting to sabotage Foxconn Technology Group's plan to invest $800 million in the Chinese mainland-based chipmaker Tsinghua Unigroup, Reuters reported on Wednesday. And, some DPP officials on the island reportedly even claimed they will definitely not let the deal go through.

As tensions escalated across the Taiwan Straits as a result of US House Speaker Nancy Pelosi's recent provocative visit to the island, the secessionists on the island have become increasingly blatant to impose political coercion on companies' normal business decisions, trying to tornado cross-Straits mutually beneficial economic and technology cooperation.

The blatant threat by the secessionists on the island to impede Foxconn's legitimate investment plan lays bare the sinister intention of the DPP authorities to collaborate with the US to split the industrial chain in the Asia-Pacific economic circle. And, when DPP officials pursue their own political interests, they don't hesitate to sacrifice the economic interests of the enterprises, let alone the interests of the people on the island.

The arrogance of the DPP officials also exposes their ignorance of moving against the laws of the economy and the world's globalization trend. As a vital part in Apple's supply chain, Foxconn's success in the Chinese mainland market is a microcosm of the mutually beneficial economic cooperation between the two sides of the Taiwan Straits, and it is also a model of corporate success in economic integration.

Since coming to the mainland market in 1988, Foxconn has now grown into the world's largest contract electronics manufacturer and the fourth-largest information technology company by revenue. With more than 40 plants scattered in the mainland, the company's imports and exports account for 3.5 percent and 4.1 percent of the mainland's total import and export volume in 2020, the company said.

Since the outbreak of the COVID-19 pandemic, the anti-China politicians in the US with ulterior motives have incited its allies to "decouple" from China in industrial supply chains. In order to attract more manufacturing companies to set up factories in the US, Washington has spared no effort to lure Foxconn and other companies to set up plants in the US.

However, it turns out that even with the impacts of the pandemic, Foxconn has not only continued to expand its investment in the mainland, but also continued to grow its revenues. The fact is Foxconn is inseparable from the mainland market. From the perspective of broader cross-Straits economic, trade and technological exchanges, cooperation is a trend no one can deny or reverse.

Against the backdrop of China-US technological competition, the US is intensifying its technological suppression of Chinese companies, while intensifying the divide of economy, technology, and industrial supply chain in the Asia-Pacific region. To make things worse, the Western propaganda machine will collaborate with the US and try to incite the DPP authority on the island of Taiwan to undermine cross-Straits economic and technological cooperation.

Last month, Foxconn announced its $798-million investment plan to invest in Tsinghua Unigroup. The deal came as Foxconn seeks to invest more in the upstream industrial chain and build up its scientific and technological strength. Tsinghua Unigroup is a good choice for Foxconn to extend its business to semiconductors.

The constantly upgrading industrial chain in the Chinese mainland will give innovations a broad application scenario in deepening regional integration of industrial chain. Even if the DPP secessionist authority wants to threaten or block companies' cooperation, they may find themselves difficult to do it. After all, the mainland's giant market will speak.