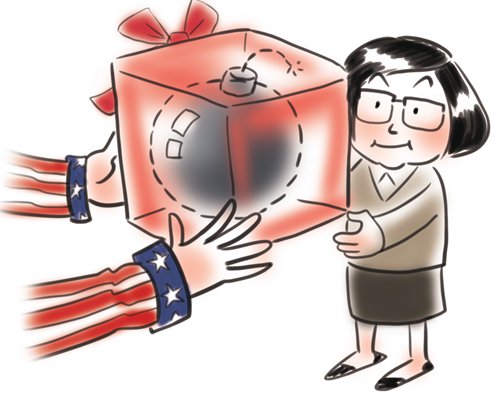 US President Donald Trump on Friday signed the Taiwan Travel Act. The bill, which would have gone into effect on Saturday automatically even if Trump had not signed it, allows US officials at all levels to travel to Taiwan and high-level Taiwanese officials to enter the US. It also encourages the Taipei Economic and Cultural Representative Office to "conduct business" in the US. The bill has drawn massive attention and was viewed as a major "diplomatic" victory by Tsai Ing-wen's administration. As a pro-Taiwan base, the US Congress has played a negative part on the Taiwan question, creating obstacles for peace and stability of cross-Straits relations and hindering efforts to solve the Taiwan question peacefully. The Act was passed both the Senate and the House of Representatives by unanimous consent, showing a strong pro-Taiwan stance.Since Trump became president, the move to end the restriction on official visits between the island and the US has become public. Some pro-Taiwan senators took the opportunity to show their dissatisfaction with Trump's policy toward Taiwan, exerting pressure on the government, and to gain political advantage for reelection in the coming mid-term election. In the Capitol Hill and US political circles, supporting Taiwan is a kind of political correctness. It was widely predicted that Trump would not veto the bill. Therefore that the Act took effect is not a surprise.The pro-Taiwan stance is rooted in the vigilance against China. In the US National Security Strategy, China was deemed a "strategic competitor" that challenges US national security. Hence, the US believes it needs to unite all forces that can be united to counter China. Such Cold War mindset brought pro-Taiwan forces to the stage, leading to cementation of the US-Taiwan alliance with an aim to keep Taiwan an instrument in the West Pacific in containing the mainland. In 1979, the Congress passed the Taiwan Relations Act as a guide for ties with the island, authorizing the continuation of commercial, cultural and other relations between the people of the US and the island without supporting official exchanges. And the three joint communiqués between Beijing and Washington severed diplomatic relations between the island and the US. In international politics, official exchanges amount to recognizing bilateral sovereignty. In 1995, then-leader of Taiwan Lee Teng-hui's visit to the US triggered the third cross-Straits crisis. Afterward, leaders of Taiwan used the excuse of transit to visit the US and official exchanges were sought for decades by Taiwan authorities. The Act will pave the way for US-Taiwan official exchanges, send misleading signals to Taiwan authorities, encourage pro-independence forces within the island and drag cross-Straits relations into a quagmire.The one-China principle is the political foundation of China-US relations. Beijing firmly opposes all forms of official exchange and military contact between Washington and Taiwan. That the Congress tried to break the US commitment to maintaining unofficial relations with Taiwan by legislation goes against the one-China principle and the three joint communiqués . As some of its clauses are not legally binding, the Act will not significantly dent Sino-US relations. However, the strong pro-Taiwan forces should be noticed. It is possible for Trump to cater to pro-Taiwan forces and use the Taiwan card to bargain with Beijing, bringing an element of uncertainty to Sino-US relations.Recently, over a dozen high-level officials in the Trump administration were replaced, revealing a rise of forces which advocate a tough stance against China. But the US should not abandon the political foundations and consensus of relations with China which have existed for almost 40 years.Peace and stability of cross-Straits relations are in line with the common interests of Beijing and Washington. If the Taiwan question is not dealt with well, it may bring disaster to bilateral relations. Over the last year, the Trump administration has realized how vulnerable and vital the Taiwan question is for Sino-US ties. It should know there is no space to play tricks on the question. China and the US both need to contribute to maintaining the stable relationship and whether the Trump administration implements the Act will be a touchstone of bilateral ties.