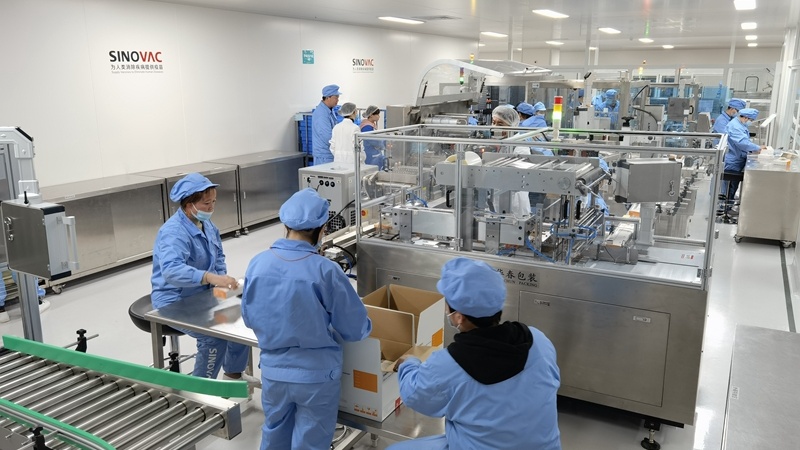 The COVID-19 epidemic represents the biggest moral test the international community has faced in a generation. But so far, humanity is failing this test.

High-income countries representing a mere 16 percent of the global population have reportedly bought up about 70 percent of coronavirus vaccines that will be available in 2021.

Rather than figuring out ways to get the vaccine to the rest of the world faster, they are squabbling amongst themselves over who will be first in line.

It's time to put domestic politics aside and put people first.

This is what Wang Yi, Chinese state councilor and foreign minister, emphasized at the virtual meeting of the United Nations Security Council (UNSC) on global access to COVID-19 vaccines on Wednesday.

The COVID-19 epidemic has highlighted the shameful economic inequity that too many people simply accept as a fact of life.

Within wealthy developed countries, the laptop class of people can cocoon inside their homes and ride out lockdowns in relative comfort.

On the other hand, regular working people often had to risk their lives to show up in person at work to simply pay for groceries or make rent or mortgage payments.

This is merely the inequity within developed countries.

The inequity between countries is even more shocking.

According to the United Nations, just 10 countries have administered more than 75 percent of COVID-19 vaccinations.

Some nations have to live with extreme disparity, both within their borders and globally, as an inevitable fact of life.

Not China. Over the past decades, the Chinese government has lifted more than 850 million people out of poverty. Last year, as the result of a targeted township-by-township plan, extreme poverty was eliminated across the country.

China is helping other developing nations lift themselves out of poverty, too, not with charity or dependence-creating aid programs, but by helping them develop infrastructure and trade. This approach, which helped China escape poverty, will help other nations stand on their own two feet in a sustainable way.

China is bringing this same fraternal attitude to fighting COVID-19.

President Xi Jinping has announced that Chinese vaccines would be a global public good and that China would help realize vaccine accessibility and affordability in developing countries.

Without attaching any political strings, China has donated vaccines to 53 developing countries, including some of the most fragile, such as Palestine, Somalia, Iraq, South Sudan, and Syria.

In some countries, COVID-19 seemed to be under control. But due to a neglect of the most unfortunate, including the poor, undocumented workers, and prisoners, the virus spread undetected and reemerged, stronger than ever.

The same dynamic will remain true globally if rich countries immunize their people and let the disease run rampant through poorer countries.

As long as the disease rages in parts of the world, mutating as it spreads through the population, all people are at risk.

The COVID-19 epidemic highlights the shared destiny of humanity.

It would be meaningless for vaccines to reach high-income countries quickly while the world's poorest have none at all.

Wang said on Wednesday that China is willing to step up international cooperation. It called on other nations to suspend unilateral sanctions and pause conflicts.

Some countries have chosen to play politics with the pandemic, fanning the flames of prejudice, rejecting science, and pushing out disinformation in an effort to politicize the pandemic.

Notably, such countries are not talking about helping other nations at all but instead using the force of the government to make sure their own people get vaccinated first.

For China, the global fight against COVID-19 is not a competition but more like a relay race, in which all of humanity help each other defeat a common enemy.