OPINIONS Talk of US cyber war on China ridiculous

Talk of US cyber war on China ridiculous

A post claiming the US would wage a cyber war against China by dismantling net neutrality rules after it announced additional tariffs of 25 percent on Chinese imports worth approximately $50 billion has been circulating on WeChat. It should be known that the US' repeal of net neutrality rules is not related to its attempt to start a cyber war against China. But this post did trigger wide anxiety. 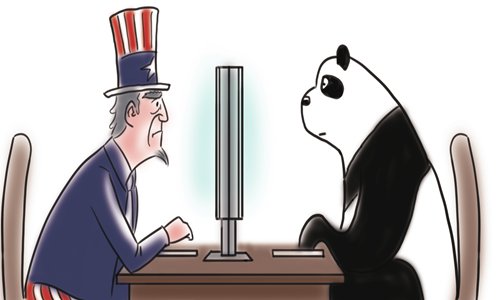 Net neutrality requires internet service providers to offer equal access to all web content. The rules, enacted by the Barack Obama administration in 2015, prohibit internet providers from charging more for certain content or from giving preferential treatment to certain websites, something that could hurt particular users who cannot afford online content. In this regard, online users have access to stable bandwidth resources based on the cooperation between content and service providers.

However, the Donald Trump administration repealed net neutrality, saying it jeopardized the efficiency of market operations and distorted market behavior. It also came as a result of continuous lobbying of the Federal Communications Commission by US internet giants.

The post alleged that net neutrality rules had prevented the US from launching a cyber war against China. When asked in 2013 whether the PRISM program under the National Security Agency had violated the Fourth Amendment to the Constitution after former NSA contractor Edward Snowden leaked the massive wiretapping project of the US, former CIA director Michael Hayden said the Amendment only protects the privacy of American citizens. Linking net neutrality rules to China-US cyber security issue is ridiculous as it suggests that China's national security depends on certain US laws.

In terms of China's access to the global internet mentioned in the post, it is necessary to mention the internet backbone, which is comprised of the principal data routes between large, strategically interconnected computer networks and core routers on the internet. From the perspective of network topology, the backbone network is typically a fiber optic trunk line that consists of major data points across the continents. Computer networks in the Chinese mainland gain access to the backbone network through the mainland's access points to the global internet.

The largest providers that run the internet backbone, known as tier 1 providers, have such comprehensive networks that they don't need to purchase transit agreements from other providers. As of 2014, there were seven tier 1 providers in the telecommunications industry. Despite not explicitly stipulated in international law, a country's efforts to cut off another's access to the global internet can be regarded as the declaration of war to some degree, and the two countries involved are belligerent.

More ironically, in order to increase the credibility of the post, the writer even cited US-planned cyber attacks on Iranian nuclear facilities, which may refer to the Stuxnet computer worm that destroyed centrifuges inside Iran's Natanz uranium enrichment site in 2010. Although the industrial control system attacked by the powerful virus can be regarded as a type of computer network, it is completely different from the internet, especially the network mentioned in net neutrality rules. Cyber attacks on a country's key infrastructure should be regulated and discussed within the scope of international law and the framework of regulations on cyberspace's strategic stability, instead of being addressed by a country's law.

The world is undergoing profound changes, which can be seen in the trade rift between China and the US. Trump's eccentric personality worsens the situation. However, China should maintain its strategic will and focus. Beijing's endeavor to prepare for the strategic games among major powers should be underpinned by its capability to identify online rumors and prevent moves to disrupt the country's strategic decision-making process.

The author is director at the Research Center for Cyberspace Governance, Fudan University.