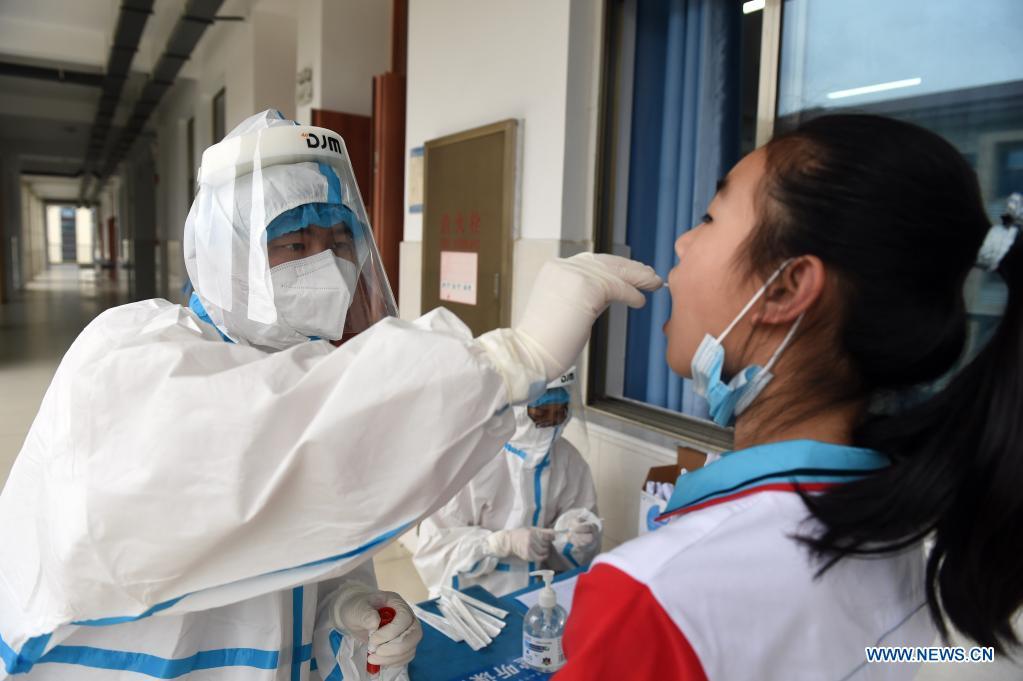 A medical worker collects a swab sample of a student for nucleic acid testing at a primary school in Lu'an, East China's Anhui province, May 17, 2021. (Photo: Xinhua)

That three employees from two Chinese enterprises in Lagos, Nigeria, were found to have altered the results of their Immunoglobulin G test reports so they could board a flight home should be a wake-up call that vigilance can never be relaxed as far as the screening of those who pass through the customs from overseas is concerned.

It is not the first time that such alterations of test reports have been discovered. Another Chinese returnee who altered the result of his test report so that he could come home from Russia in December was confirmed to be infected with the novel coronavirus. He was sentenced to one year of imprisonment for what he had done.

The importance of safeguarding what has been achieved can never be overstated. Without the joint efforts of governments at all levels and residents strictly observing the prevention and control measures, China would not have become one of the safest havens from the virus, and neither would its economy have regained its vitality.

Apart from having as many of its citizens as possible vaccinated, it is of the utmost importance to be on guard against the possibility of the virus being brought into the country from overseas.

Although the sources of the local clusters of infections in Northeast China's Liaoning province and East China's Anhui province are not clear yet, the virus quite likely came from overseas since the country had been free from local cases for months. And these clusters would not be the first time that bursts of local infections have been caused by either imported cargoes or cases.

Given the pandemic's complexity due to the deterioration of situation in a number of countries and the appearance of different variants of the virus, control and prevention measures at customs need to be further tightened.

Domestically, every individual also needs to observe prevention and control measures as they did during the epidemic, leaving no space for the virus to spread.