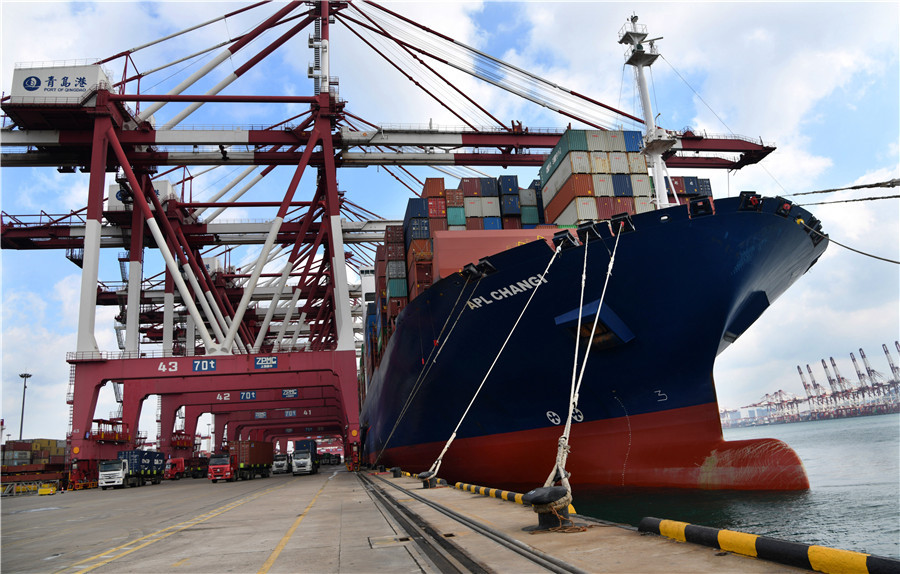 According to a report in The New York Times on July 16, United States Treasury Secretary Janet Yellen said tariffs that remain in place have harmed US consumers.

Tariffs are taxes on consumers and tariffs were not put in place on China in a way that was very thoughtful with respect to where there are problems and what are in the US interests, Yellen was quoted as saying.

Yellen's comments do not necessarily mean the US is interested enough to consider a complete rollback of the tariffs. In fact, it is still difficult to do.

Moreover, Yellen's comments regarding tariffs from the perspective of US consumer interests may also be a way to justify and explain the current inflationary pressure for the US government. The current level of inflation has affected the approval rating of US President Joe Biden to a certain extent.

Yellen also said the phase-one trade agreement between China and the US "really didn't address in many ways the fundamental problems we have with China".

The New York Times pointed out that Yellen's interview came as the Biden administration was undergoing an extensive review of Washington's economic relationship with Beijing, and the review must answer the central question of what to do about the deal. Obviously, that will become the US basis for next-phase Sino-US economic and trade relations or agreements.

If China and the US are to reach a phase-two economic and trade agreement, the new agreement will face both opportunities and challenges compared to the phase-one agreement.

The challenge is that the Biden administration will be dissatisfied with the procurement content emphasized by the Trump administration and will put more emphasis on economic and trade rules.

There is an opportunity for substantial tariff reductions. That seems to have rising possibilities but still faces difficulties.

Why is it still difficult to reduce tariffs comprehensively?

First, we should mention the strong protectionism catering to political needs in the US. In a political environment in which the two major political parties have reached a consensus and regard China as a strategic competitor, any weakness in policy toward China could be considered to be damaging. Political opponents, including Republican lawmakers, have begun to scrutinize the statements of Biden's advisory team and are ready to slam any efforts aimed at overturning the Trump-era punitive measures against China, including tariffs and controls on technology exports. Earlier this year, the new US Trade Representative Katherine Tai also made it clear that Washington is not ready to cancel tariffs on Chinese goods.

Second, the Biden administration wants to reserve bargaining chips for the next-phase China-US economic and trade negotiations. Even advocates of free trade within the US, such as former US Treasury secretary Hank Paulson, also believe tariff cuts should be part of the new round of trade negotiations to exchange for China's concessions over subsidies, State-owned enterprises, and other structural reforms, while calling on the Biden administration to cut tariffs on China.

In an exclusive interview with The Wall Street Journal, Tai hinted she supports the above-mentioned economic and trade strategies with China, and said, "Every good negotiator retains his or her leverage to use it". The US will emphasize economic and trade rules in the next phase negotiations, and tariff reductions will become an important bargaining chip.

The US is still motivated to reduce tariffs to some extent.

First, since the Biden administration came to power, its primary goal is to maintain technology advantages and ensure the security of the supply chain, and its policy toward China upholds the approach of "small courtyard, high wall" precision attacks. Tariffs strike wide and cause collateral damage and are obviously not a perfect option, although they will not and cannot be canceled in the short term.

After Biden took office, he convinced the US Court of International Trade to declare Section 232 steel and aluminum tariffs on "derivative" products invalid, and his administration has emphasized the core and key areas of supply chain security.

Such policy orientation also shows that the policy focus of the Biden administration is not the tariff measures themselves.

Second, recent US inflationary pressure has risen significantly, and monetary policy has fallen into a dilemma.

The US CPI inflation rate reached 4.2 percent in April, and then remained at a high level of above 5 percent in May and June. Currently, with the ongoing uncertainty surrounding the pandemic, the foundation for a US economic rebound is not necessarily solid. Meanwhile, due to stimulus checks and jobless benefits, the US labor participation rate is still relatively low. According to our calculations, if the labor participation rate remains at February levels, the current actual unemployment rate in the US will reach 8.3 percent, significantly higher than the nominal unemployment rate. In addition, the excessive government spending burden also makes it more difficult to withdraw from the loose policy.

These factors have put the US Federal Reserve in a dilemma in the face of inflation. If a significant increase in tariff exclusions can have a positive effect on suppressing inflation, this is obviously a measure that the US will consider.

The Biden administration has repeatedly emphasized that it does not intend to engage in a comprehensive "decoupling" or "new cold war" with China, but to maintain cooperation in specific areas during the competition with China and urge China to act in line with Western countries' international rules. However, due to domestic political pressure, the Biden administration has no means to make a breakthrough.

Tariff exclusions have already been implemented by the Office of the US Trade Representative and are relatively easier for the Biden administration to stomach politically. At the same time, tariff exclusions do not involve the legislative process of Congress, and are less subject to domestic political pressure.

Second, there is plenty of room for the US to increase tariff exclusions on Chinese goods.

For these tariffs, the USTR will exclude tariffs on some goods based on the application of enterprises for a period of one year and will conduct a review at the end of the period. Therefore, the level of tariff exclusions will determine the actual level of tariffs implemented.

The USTR's tariff exclusions have showed that it gives priority to supply chain security.

Compared with List 1 and List 2, tariff exclusions for List 3 and List 4A have been greatly reduced. That is because the products in lists 1 and 2, such as automobiles and auto parts, require relatively complicated production technologies and longer supply chains, and it is not easy to find substitutes in a short time. Thus, they are given priority in tariff exclusions. In addition, considering that tariff exclusions on many products are not extended after the expiration of the duration, the actual exclusion rate has also been greatly reduced.

In general, China and the US can significantly increase tariff exclusions on each others' goods to promote the formation of a starting point for benign interactions in bilateral economic and trade relations.

With the continued spread of the pandemic, the global supply chain is facing unprecedented uncertainties. The US chip sanctions, port congestion caused by shipping mishaps and production halts caused by the coronavirus, display that uncertainties place tight supply chains under even greater pressure. With these negative shocks to supplies, stagflation may make the US monetary policy space even more constrained. China and the US should form a consensus to strengthen cooperation in global supply chains, and work together to stabilize expectations for global supply chains.

At present, China and the US substantially increasing tariff exclusions will help reduce costs within the global supply chain, thereby accelerating relief from stagflation pressure, which will also be an important beginning for the formation of positive interaction between the two countries.