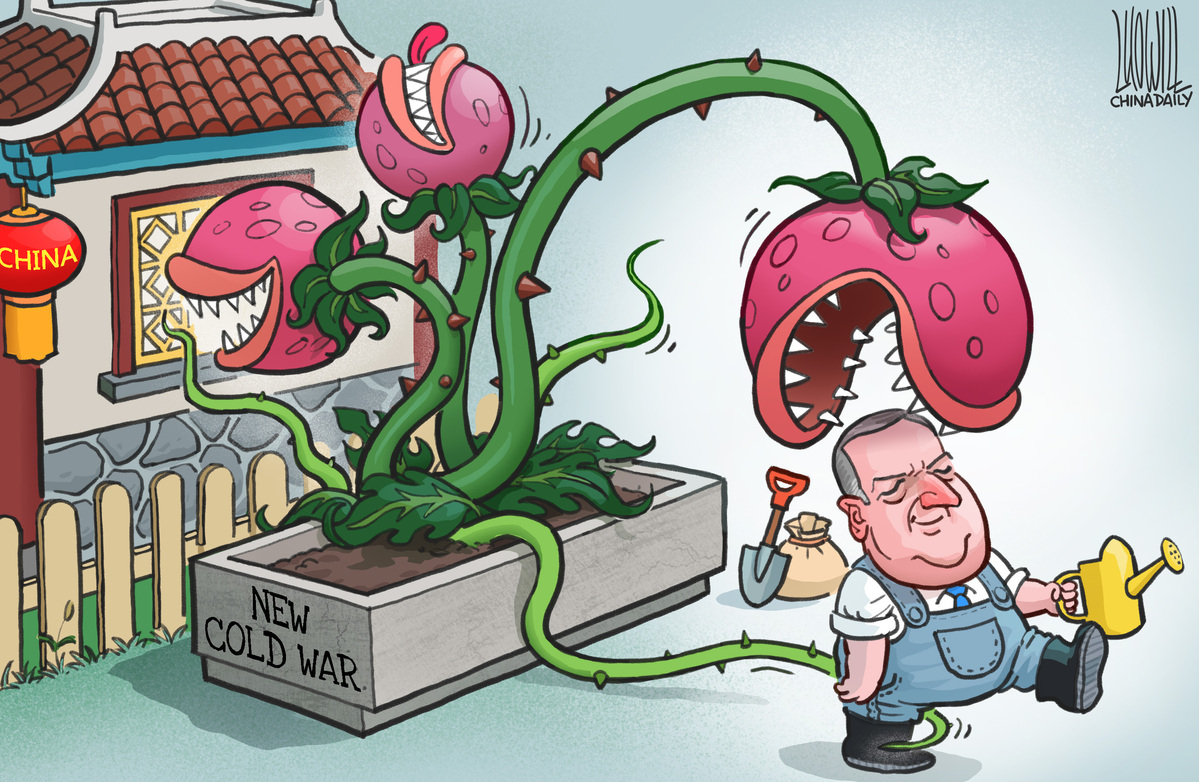 Nothing could be more ridiculous than US Secretary of State Mike Pompeo declaring early this month that he would intensify the "clean network" initiative to protect US assets, because the United States not only possesses the most powerful global surveillance network in the world but uses it against even its allies.

Still more ludicrously, Pompeo has asked the US' allies and industry partners to join the initiative to build a "clean fortress" that could ensure the security of all countries. Essentially, the "clean network" initiative means purging Chinese telecom networks from the US, and Chinese apps from App Store and mobile devices.

By signing two executive orders banning US companies and citizens from doing business with TikTok owner ByteDance and WeChat owner Tencent, US President Donald Trump is expediting the technology decoupling of the two countries, whose impact is being felt by businesses and people on both sides.

At the end of 2018, the US Department of Commerce's Bureau of Industrial Security unveiled an export control framework for key emerging and basic technologies and related products, targeting China-related business of big US chip makers including Intel and Qualcomm.

The US has also added some Chinese tech companies, including ZTE, Huawei and Hikvision, to its so-called Entity List on lame pretexts. So far, the US has put more than 100 Chinese tech companies on the list, while clamping down on Huawei, banning US companies from supplying chips and other high-tech products to it, as well as persuading its allies such as Australia, Canada, the United Kingdom and New Zealand to exclude Huawei from their 5G networks even though the Chinese company is the world leader in 5G technology.

The ban on TikTok and WeChat is a continuation of the White House's moves to decouple the Chinese and US economies.

With the US suddenly pressing the "pause" button on technological cooperation, Chinese tech companies will suffer in the short term. As Yu Chengdong, CEO of Huawei's consumer business, said at a recent information technology conference, Huawei cannot make high-end Kirin (system-on-a-chip) after Sept 15 due to the US sanctions.

In semiconductor manufacturing, Huawei only designs chips, but doesn't manufacture them. There are two reasons for that. First, China still faces some technological bottlenecks in large-scale chip manufacturing. And second, thanks to globalization, the science and technology industrial chain is already well established. In the chip industry, for example, the five main links－materials, equipment, manufacturing, design and packaging testing－form a highly decentralized global industrial chain, and no country can monopolize the entire chain.

But the White House's moves will also seriously hurt many US companies. In 2019, for instance, the US exported $46 billion worth of chips, with China accounting for $8.8 billion, or nearly 20 percent, of that. And Qualcomm had the highest share (41 percent) of China's mobile phone chip market. Which means without the Chinese market, US chip makers will suffer huge losses.

In the long run, technological decoupling with China will also rob the US of some of its competitiveness in the tech field. As China has a huge market and well-developed production chain, which can propel scientific and technological development and innovation, the US' sanctions will prompt Chinese companies to upgrade their industries, although the process may be arduous and long.

According to a Boston Consulting Group report, if indeed the Sino-US technological decoupling becomes a reality, the US is likely to lose its global leadership in the semiconductor industry and could be overtaken by the Republic of Korea in the short term, and China in the long term.

Businesses and individuals in neither China nor the US want to see the technological decoupling of the two economies, because they would suffer the most. And they know that despite some drawbacks, globalization has benefited businesses and people in both China and the US, and the rest of the world.

As such, the US administration's Cold War mentality and its desperate attempts to divide the world into two camps based on ideology will not work, because in the age of globalization, ideology cannot outweigh national interests.

The author is an assistant research fellow at the Institute of American Studies, Chinese Academy of Social Sciences. The views don't necessarily represent those of China Daily.