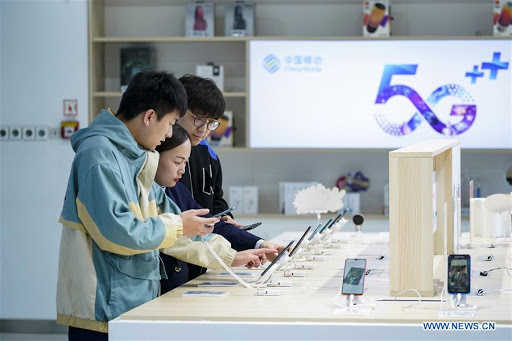 The Chinese scope in developing innovative technology products and services in the world have a habit of growing every single day, as new items and services are being developed every month. Being a key attention to the country towards expanding technology in various sectors, like hospitals, schools, universities, laboratories, media centers, and many more. The People’s Republic of China has emerged in being the first country worldwide to actually use a viable amount of advanced network carriers in their country. Ranging over 50 cities nationwide including Beijing, Shanghai, Guangzhou, and several more.

5G carrier network has been a trending issue in all of the continents worldwide but none of the countries had succeeded in providing safe and useable service of the network until recently South Korea and the giants of the 5G service in China.

It was first launched in Beijing city, the capital of China on the November 1, 2019 by China’s top telecom companies like China Mobile, China Telecom, China Unicom, Huawei, ZTE and Nokia, hence qualifying to the measures required, the awardees of the government contract in commercializing the network service. This evolution wasn’t a child’s play as it required a lot of tests that went unsuccessful, damaging of highly expensive state of the art devices that can feed up an entire village for over one year, launching of satellites and other ground work station tests. The government through the Ministry of Industry and Information Technology (MIIT) strategized a plan that will involve the construction of over 500,000 base stations in the continent with 5,000 already installed in the Beijing by China Mobile and over 50,000 base stations nationwide through the state-backed telecom companies, China Telecom and China Unicom early this year.

The carrier network means of transmission for reliable coverage consists of various discoveries founded by developers like the D2D (device to device technology) process which works by direct communication between communication terminals, expanding network connectivity, and access networks without the help of base stations making connectivity to be super-fast and reliable. This carrier network as experts in the technology world articulates that it has the capabilities in being the change that some of the infrastructural sectors have been looking for a very long time. Ever since they started from 1G to currently, the working 5G.

5G capabilities can solve a lot of critical problems and can be a boost in developing new items that can ease the work of production and furthermore increase socialization. Ever since its development, the Chinese has found that it is very helpful and soothing in supporting and controlling many products but more especially focused on AI (artificial intelligence),virtual reality and there readymade robotics that is being programmed by artificial intelligent (AI) algorithms, super-speed data usage of sending and receiving files in seconds from 100mb to 1gb data, 0.01 delay with video streaming and no delay by audio streaming, virtual news presenters that are made from Artificial intelligence, having seen them in performance during my visit at the Xinhua News Agency on a test phase, reliable and real-time remote monitoring of sick persons in hospitals, more secure and verbose informative systems, driverless cars and trucks and so much more as they tend to expand the features of the technology.

As the proverb goes, to all advantages there must be some amount of disadvantages as radiation is an underlined factor in the use of 5G carriers, but with the Chinese telecom responsible for the 5G, it is very forthcoming in protecting its citizens and users from this carrier service disadvantages. The government as well laid out strict measures so that it can’t harm its citizens nor wildlife and also gaining the exclusive rights to the service nationwide.

Using a high amount of radioactivity in order for it to work, the carrier network uses a high spectrum beam in order to transmit data and receive through its beacons, the carrier service works under high protective measures that even with a 24 hour in use, the user won’t be exposed to any radioactive substances. Hotels, restaurants, and bars are being coated internally with electromagnetic field protective that will stop or reduce further radioactivity and will cause the network to be efficient and not to even have a single latency with many active users online and also deeper underground tunnel being dug throughout the capital for public protection on the streets, also the installation of high telecom poles in the regional province is a key policy that the Chinese government has placed so that even the low-class people won’t get affected by a third party disaster towards their health.

China is leading the world and its telecom operators has found numerous ways in using this technology beyond the Asian continent and is willing to do business with any country interested in having such carrier network to be embedded into their systems and also carry out installations for them if they don’t have the experienced workers as it is a very thorough job that requires patience and skill.

With estimated users of this service in the year, 2020 is placed at 110 million, the People’s Republic will be the biggest market on 5G worldwide with models furthering to 2025, the country will account for the largest market even bigger than North America and Africa combined.

Hence, the cost for 5G is way cheaper compared to South Korea as they are being priced at a per-gigabyte base with a price tag starting at $0.39. Looking at their population and the means of reducing poverty, the government is also looking at providing better and fast communicative ways of reaching people within and outside of the country as it is the aim of the People’s Republic. Everyone should be able to acquire products and services wherever and however, it doesn’t matter the class or area but once you’re in China you must have a share of the cake.

The author is a journalist in Sierra Leone.