OPINIONS The Belt and Road Initiative in a global perspective

The Belt and Road Initiative in a global perspective 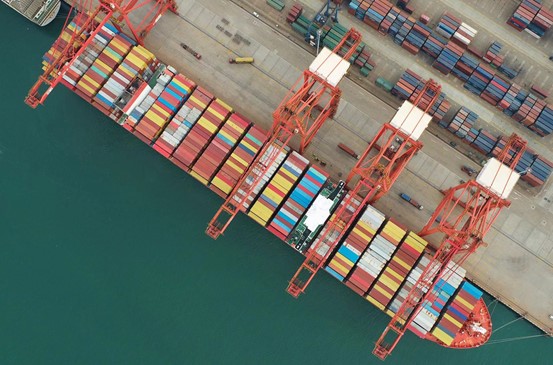 On May 22, 2022, a large container ship is loading containers at the terminal of Lianyungang Port, east China’s Jiangsu province. As the most convenient seaport in Central Asia, the port has promoted cooperation under the Belt and Road Initiative (BRI). (People’s Daily Online/Wang Jianmin)

In 2017, Chinese President Xi Jinping proposed his vision of building a community with a shared future for mankind at the 19th National Congress of the Communist Party of China (CPC). This has put all international initiatives of China, including the Belt and Road Initiative into a global perspective.

Today, four and a half years later and a couple of months before the 20th National Congress of the CPC, it is necessary to discuss the experience gained and further steps to be taken in the realization of both – the vision of shared future for the mankind and of the Belt and Road Initiative.

There are two reasons that make this need pertinent: First, the period of a unipolar world of the post-cold war era is irreversibly over. A new multipolar world is emerging amid tensions and turbulence. In addition, a conceptual framework of the future global system, a “world of shared future” is necessary.

Second, a careful look at the existing patterns of international cooperation may reveal that the needed building blocks, upon which a vision of a shared future should be developed further, already exist. The Belt and Road Initiative is one of the key building blocks.

Let us take a look at the global system first. The Ukraine crisis has revealed both the weakness and importance of the global system. The problem of Ukraine was on the agenda of the UN Security Council since 2014. In 2015 the Council endorsed the second Minsk Agreement that provided a framework for peaceful settlement of the situation in Eastern Ukraine. However, The Security Council failed to act to ensure the implementation of that agreement. Instead, an ad hoc regional mechanism - the “Normandy Format” involving the regional powers and Ukraine - was accepted as the main framework for negotiations. However, this mechanism was also an obstacle to a more active engagement of the UN Security Council. The “Normandy Format” has failed and made the UN Security Council to fail too.

The lesson that should be learned from this experience is that the UN should not be sidelined in dealing with the issues of peace and security. This is an important lesson that many, but not all international actors have overlooked. The GSI, another China-proposed initiative announced by Xi at the Boao Forum for Asia in April this year showed precisely that security issues must be considered and resolved within the framework of globally accepted principles, such as those under the UN Charter.

The initiative highlights the importance of the UN, the only truly global and universal organization. The founding principles of the UN, the universality of its membership, its programs, funds and agencies and, importantly, its unique global convening power, are indispensable. The UN should be stressed in order to effectively address the problems of our era. The state of the planet today provides ample needs and opportunities for global cooperation. Overcoming the Pandemic of COVID-19 is a priority for all. At the same time the world is facing a triple planetary crisis of global warming, declining biodiversity and pollution. These problems can be resolved only by global action and the UN is the indispensable forum for such action.

The second reason for an in-depth international discussion about China’s vision of shared future for mankind is found in the existing successful models of international cooperation and the new opportunities they provide.

The BRI is an important example. Its progress made so far already offers significant experiences as well as opportunities for the future. So far, its implementation has shown the importance of demand-driven projects and infrastructure improvement that enable stronger trade flows.

In addition, it has shown that the future of BRI could expand the infrastructure to other areas, such as health, green and digital silk roads.

There are spaces for innovation if we take the example of its progress in Africa. Almost all the African countries, more than 50 so far, have engaged in the BRI cooperation. The cooperations include a whole range of economic activities, such as infrastructural development, new telecommunications, additional manufacturing industries and banking. There is much potential for all areas of economic cooperation in the future.

Moreover, African countries are already cooperating with a variety of partners. European Union, traditionally a major partner of Africa, has well-established ties with Africa. New forms of cooperation will be increasingly relevant in the future. It would be natural for the Chinese and European approaches to converge, based on the priorities and the development needs of the African countries.

The evolving realities of international cooperation – both global and region-specific - will define the realization of the vision of shared future of the world. No individual country can succeed unilaterally. Unilateralism was short lived. The alternatives of cooperation and partnership already exist, and they are being tested in practice that is constantly opening new opportunities. China’s vision of shared future for mankind provides strong incentives as well as valuable practical experience. They must be used for the benefit of all.

The author is the former Slovenian president and a member of the Council of Advisory of the Boao Forum for Asia .