OPINIONS The election is over; Trump's attacks will linger

The election is over; Trump's attacks will linger

WASHINGTON (AP) — The 2020 presidential election is over. But President Donald Trump’s baseless efforts to undermine it, and the consequences of those undemocratic actions, will linger in America for far longer. 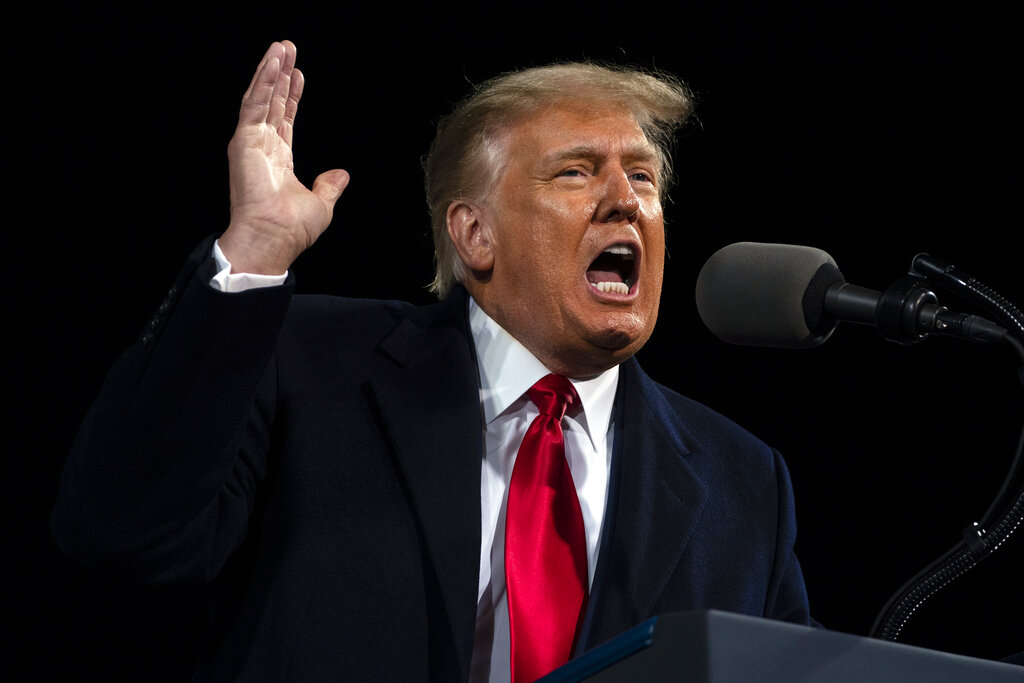 It is increasingly clear that there is no fact, no piece of evidence and no court ruling that will dissuade Trump from trying to mislead Americans about President-elect Joe Biden’s victory. And Trump has hardly been alone in that effort; numerous Republicans have stood with him or stood by silently, including 126 GOP members of the House who backed a bid to get the Supreme Court to invalidate Biden’s victory in four key states.

Trump responded on Twitter late Friday, “The Supreme Court really let us down," but he vowed to “fight on!”

The actions of Trump and his allies have exposed a striking reality about America: Many lawmakers in one of the nation’s two major political parties are either willing to back efforts to overturn a free and fair election or unwilling to speak out against such a campaign.

That lays the predicate for politicians to question the integrity of any election if the results don’t go a party or a candidate’s way, a dangerous notion that is likely to further erode Americans’ trust in government and test the durability of the nation's democratic institutions.

With the sitting president leading the way and friendly media outlets standing by to amplify his claims, the result is that millions of Americans will likely remain convinced Biden’s victory was illegitimate and the election was fraudulent. According to a Quinnipiac University poll out this week, 77% of Republicans believe there was widespread fraud in the November election and about 60% say they consider Biden's victory illegitimate.

“Since election night, a lot of people have been confusing voters by spinning Kenyan Birther-type, ‘Chavez rigged the election from the grave’ conspiracy theories,” said Sen. Ben Sasse of Nebraska, one of the only Republican lawmakers to weigh in after Friday’s high court ruling. “But every American who cares about the rule of law should take comfort that the Supreme Court — including all three of President Trump’s picks — closed the book on that nonsense.”

Yet Sasse’s condemnation of the baseless conspiracies promulgated by Trump also hinted at their staying power.

Long before he became president, Trump was the chief proponent of the lie that President Barack Obama was born in Kenya, not the United States, and was ineligible to serve as president. There was ample evidence to the contrary, yet the lie lingered for years, fueling animosity toward Obama among some GOP voters and making it more difficult for Republican leaders to work with him.

In his waning days in the White House, Trump is now relying on a similar playbook against Biden, who will be sworn in Jan. 20. His election attacks have frozen many Republicans, leaving them unwilling to acknowledge Biden’s victory and suggesting they may see little political incentive to work with him once he’s sworn in, despite the historic pandemic and economic uncertainty gripping the country.

Even Senate Majority Leader Mitch McConnell, who served alongside Biden in the Senate for decades and struck deals with him when the Democrat was serving as Obama’s vice president, has refused to plainly state that Biden won and Trump lost.

“The election fraud hoax will go down as one of the most embarrassing and dishonorable episodes in American political history, and countless Republican officials went along with it and promoted it,” said Rep. Justin Amash, a Republican-turned-independent from Michigan and a frequent critic of the president and his former party.

Some of Trump's key allies were unbowed after Friday's Supreme Court ruling. Rudy Giuliani, Trump’s personal lawyer and a force behind many of his attempts to overturn Biden’s victory in court, continued to insist without evidence that the election had been “stolen.”

“I think this is going to be a terrible, terrible thing in American history,” Giuliani said Friday night on Fox News.

Trump has lashed out at the election for weeks with little regard for reality. Judges across the country have swiftly rejected lawsuits filed by his campaign and other Republicans. Even Attorney General William Barr told The Associated Press in an interview that his department had seen no evidence of fraud that would change the outcome of the election.

Still, more Republicans rallied behind Trump's efforts this week in a brazen attempt to get the Supreme Court to cast aside the will of voters. More than 120 House Republicans, including Minority Leader Kevin McCarthy of California, added their support to a lawsuit that made false and disproven accusations about voting in Georgia, Michigan, Pennsylvania and Wisconsin — all states Biden won. The case was also backed by 19 Republican state attorneys general.

The brief order from the court rejecting the case signaled that the justices would not be drawn into a blatantly partisan effort to subvert the election results.

Attention now turns to Monday's formal voting of the Electoral College, a milestone some Republicans have suggested they are waiting on before recognizing Biden's victory. Others in the party appear to be trying to keep stoking anger among GOP voters ahead of a pair of runoffs in Georgia in early January that will determine control of the Senate.

Yet there are signs that the endgame for others could put the nation on an even more treacherous path. Shortly after the Supreme Court ruling on Friday, Allen West, the chairman of the Texas Republican Party, all but called for states to secede.

“Perhaps law-abiding states should bond together and form a Union of states that will abide by the constitution,” West wrote.