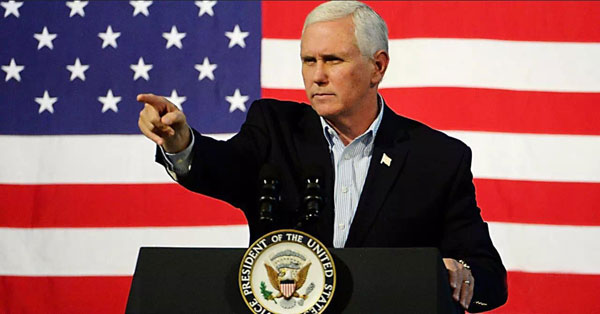 The specter of China-bashing has seemingly run over Washington of late, rearing its ugly head most visibly in US Vice President Mike Pence's tirade last week against the Asian country.

In his Oct. 4 speech at the Hudson Institute, a think tank in Washington, Pence not only repeated such trite allegations as unfair trade and technology theft, but went as far as accusing China of being ungrateful to historical US aid and meddling in US elections.

The address and the broader smear campaign indicate that some policy-makers in Washington are having a severe Sinophobia attack and succumbing to illusions. The accusations are so spurious and so absurd that they cannot stand any serious fact check.

There are at least five major fallacies in Pence's China speech. First, the claim that the United States "rebuilt" China over the past decades is just preposterous.

China's remarkable development is driven by the hard work of the over 1.3 billion Chinese people and facilitated by the country's win-win cooperation with the rest of the world.

Second, the expansionism accusation is the United States calling white black. What China has been doing is a just defense of its core interests and legitimate rights, while it is the United States that has kept throwing its weight around on Taiwan, the South China Sea and many other issues in disregard of other countries' rights and interests.

While helping boost China's development, China-US trade has brought US businesses a massive market, the American people quality and affordable products, and the US economy incentives to upgrade.

Fourth, by questioning China's commitment to reform and opening-up, the US leader turned a blind eye to Beijing's unremitting efforts to comprehensively deepening reform, expanding market access and lowering tariff levels. China has pledged that the changes in the external environment will not alter its own plan and pace of reform.

Last but not the least, the assertion that China is projecting influence in the United States and interfering in US elections is a pure illusion. Buying advertising space in US newspapers is a legitimate and common practice, and major media outlets around the world have noted that Pence offered no evidence.

In a country constantly preaching press freedom, the claim smells of an attempt to prevent the US public from knowing more about the truth of China-US trade frictions.

Although Pence called for a relationship grounded in fairness, reciprocity and respect for sovereignty, his entire speech was just the opposite of it.

Many have pointed out behind the United States' recent broadside against China is its reluctance to accept China's rapid development and the corresponding reshaping of the international landscape.

As former US Secretary of State Colin Powell said, Washington "is busy ... thinking about China as an enemy," and "thinking too much about adversarial relations as opposed to diplomatic relations."

China-US ties represent one of the most important bilateral relationships in the world. For China's part, it has consistently advocated the building of long-term, healthy and stable relations with the United States featuring no conflict, no confrontation, mutual respect and win-win cooperation.

For the United States' part, Washington is all over the map. Its increasingly harsh stance toward China has put bilateral ties at a crossroads 39 years after they established diplomatic relations.

For the benefit of both sides and the entire world, the United States now needs to stop playing ripped-off almsgiver and restore sanity and responsibility to its China policy.