OPINIONS The Japanese apologize a lot, but how sincere are their apologies?

The Japanese apologize a lot, but how sincere are their apologies?

According to reports, a 64-year-old official in the Japanese city of Kobe has been docked a half-day's pay and reprimanded for repeatedly leaving three minutes before the scheduled lunch break to buy his meal. He did this 26 times over a seven-month period. His bosses held a press conference to apologize for his mistake. 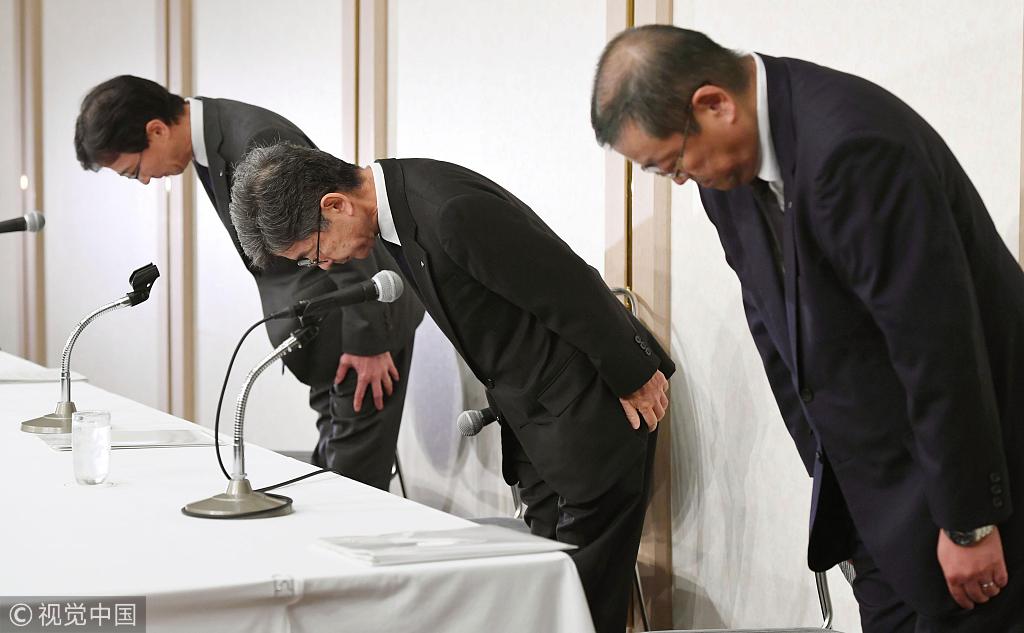 Kobe Steel Ltd. senior officials, including Executive Vice President Naoto Umehara (C), bow in apology at a press conference in Tokyo on Oct. 20, 2017. The third-largest Japanese steelmaker said its quality control scandal has deepened, as employees were found to have covered up irregularities during an internal probe, while more falsifications have been detected regarding its product data. (Photos: VCG)

This has set off a heated discussion with many Japanese netizens accusing Kobe authorities of being too rigorous on employees. It has again called into question Japan's commitment to addressing death from overwork.

As an important component of Japanese culture, apologizing can go to extremes in the country. In 2013, a member of the Japanese idol girl group AKB48 shaved her head to apologize for breaking team management rules and spending the night with her boyfriend, according to a BBC report. Entertainers breaking rules to have a relationship is practically normal in China or Western countries, but this instance was elevated to a nationwide display of self-redemption. It triggered much debate in and out of Japan at the time.

An apology of this kind is nothing more than humiliation. A reprimand to the official should have been enough. There was no need for the bosses to make a public apology. What do they expect to gain from a public apology? A pardon from the public?

American anthropologist Ruth Benedict mentions in her book The Chrysanthemum and the Sword that Japanese have an awareness of shame, but no guilt. In other words, although Japanese people often apologize, they don't necessarily feel they are wrong.

They have won worldwide praise by apologizing for everything, from the sudden price hike of ice cream, to early departure of an electric car or flight delays, all of which show their attention to detail and respect for consumers and rules. But they would not be denounced even if they didn't offer apologies for these everyday occurrences. After all, people make mistakes.

Puzzlingly, Japanese don't usually apologize for issues that concern right and wrong rather than convenience. People in Asia and around the world still have fresh in their memory Japanese war crimes of World War II including "comfort women," human biological experimentation, the invasion of China and the Nanjing massacre. But sadly, we haven't seen a heartfelt apology.

Instead, some Japanese have tried to deny historical facts. This reveals the paradoxical nature of Japanese morals - they apologize for petty things and shy away from major issues that matter enormously. A Japanese apology very often looks like nothing more than a social formality.

By apologizing, Japanese give the illusion of shouldering due responsibility for mistakes, but sometimes they use this as a method of evasion. In recent years, executives of Japanese companies have often apologized publicly for scandals such as data fabrication and fake accounting, but these operations had continued freely for many years after coming to light to the said executives.

If bowing and apologizing in the media and before the public can simply nullify wrongdoings, then their actions are an unacceptable sham. I can't help but to feel puzzled: just how heartfelt are Japanese apologies?

The author is an editor at Global Times and a research fellow on Japan issues.