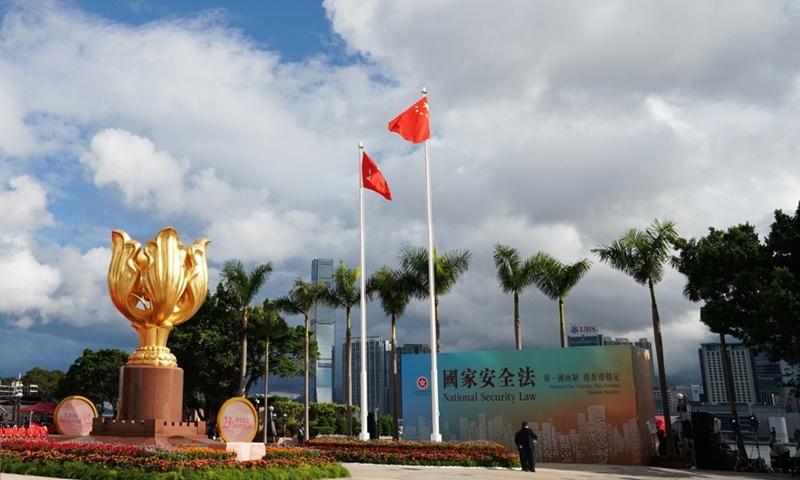 Photo taken on July 1, 2020 shows the Golden Bauhinia Square after a flag-raising ceremony held by the government of the Hong Kong Special Administrative Region in Hong Kong, south China.(Photo: Xinhua)

The catchphrase "patriots governing Hong Kong" has been gaining currency ever since the speech made by Xia Baolong, vice chairman of the National Committee of the Chinese People's Political Consultative Conference and head of the Hong Kong and Macao Affairs Office of the State Council, during a forum on February 22. The topic is also anticipated to become a heated discussion at the upcoming two sessions, the most important annual political event in China.

Various critics from Western media and the local opposition forces contend that it is a tightening of political governance within the "one country, two systems" framework. What puzzled me is how forgetful people can get, or maybe they just choose to ignore some basic facts. When talking about governance, one phrase that always comes up is, "Hong Kong people governing Hong Kong." Now, let's look at when the phrase "Hong Kong people governing Hong Kong" first came from.

In June 1984, when meeting a delegation of the Hong Kong industrial and business community visiting Beijing and a group of Hong Kong community leaders, Chinese leader Deng Xiaoping affirmed that the Chinese people in Hong Kong would be capable of running Hong Kong well. In doing so, he emphasized that "Hong Kong people governing Hong Kong" meant that Hong Kong should be managed by Hong Kong people, with patriots forming the main body.

The criteria of a patriot here is to respect one's own country, sincerely support the resumption of the exercise of sovereignty over Hong Kong by the motherland, and not to do any harm to Hong Kong's prosperity and stability. Therefore, "patriots governing Hong Kong" is merely a reminder to all of us to return to the basis of the constitutional system for Hong Kong. The legislative assumption of the Basic Law which has given Hong Kong the high degree of autonomy, independent judiciary, and all the other details of "Hong Kong people governing Hong Kong" was, indeed, for Hong Kong to be run by patriots. So what's the fuss about its legitimacy?

Second, why stress something now if it has always been the underlying assumption? Unlike the British Empire, Chinese mainland never sent a chief executive or for that matter any lower-level officials or legislators to Hong Kong. This is in contrast to the earlier days of the British colonies when even police inspectors were recruited from the UK. The Chinese central government had delivered its part of the deal. Has Hong Kong done the same? The answer, unfortunately, is a big "No."

We have seen, over the past few years, many people in our governance structure disrespect their own country and not support the motherland's resumption of sovereignty over Hong Kong. In fact, certain individuals have supported the attempted secession of Hong Kong from the motherland, and were involved or supported various activities to harm Hong Kong's prosperity and stability.

It is now necessary more than ever to go back to the original intention of "Hong Kong people governing Hong Kong," especially in an era of "profound changes unseen in a century." We are also seeing growing hostilities toward China from some Western countries. To my personal surprise, we have also seen relationships from some of our local politicians with such hostile powers. They are not only not patriotic, but almost fit the definition of treason!

So is it too much to ask our political leaders to respect their own country, China, and sincerely support the resumption of the exercise of sovereignty over Hong Kong by the motherland?

Is it too much to ask them not to do any harm to Hong Kong's prosperity and stability? I think many Hong Kong people would not think so. After all, the Article 1 of the Basic Law states very clearly that, "The Hong Kong Special Administrative Region is an inalienable part of the People's Republic of China." If you want to do harm to Hong Kong's prosperity and stability, and support foreign powers and local secessionists, why should you be allowed in the governance system where you can bring harm?

Let us be reminded and advised: Hong Kong did not join China as if China were a federal state. Instead, Hong Kong was returned by the UK to China which then established the Hong Kong Special Administrative Region (HKSAR) and delegated certain powers to the HKSAR based on the articles of the Basic Law. As Hong Kong is part of China, there should not be a place in our governance for non-patriots.

The author is the Hong Kong deputy to the 13th National People's Congress and principal liaison officer for the Hong Kong, Shenzhen Qianhai Authority.