The Olympic experience is worth more than gold medals for China

Western media, including the New York Times, have been questioning China's so-called "obsession with Olympic Gold," but as a matter of fact, the Chinese mentality toward the Olympics has matured over the years. Although winning is still important and deserves celebration, which is a stance shared by every country, China has been putting more efforts into engaging the public in sports and exercise and promoting a healthy lifestyle. The Olympics have served to advance these new trends in the society. 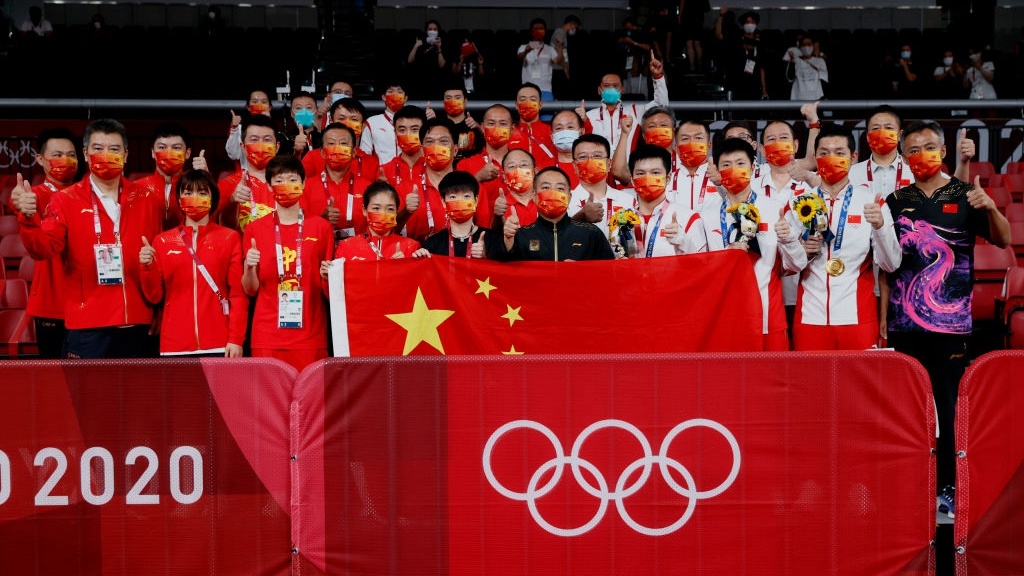 Chinese players and staff pose for a group photograph with the national flag after the medal ceremony of the men's team event at the Tokyo 2020 Olympic Games at the Tokyo Metropolitan Gymnasium, Tokyo, Japan, August 6, 2021. /Getty

The entire world eagerly awaits every Olympic Games and everyone is always happy to cheer for their country. It's a matter of pride for them to see their compatriots compete with the best, and the ecstasy that sweeps the people whenever their representatives come out on top and win the gold is indescribable.

Instead of continuing to live vicariously by watching their athletes compete on a computer, phone or television screen, many Chinese are nowadays inspired to follow their lead by at the very least becoming healthier themselves.

Very few members of any country will ever compete in Olympic Games, but everyone else can learn from these Olympians by embracing a better lifestyle. The Chinese society has been more fascinated by the Games ever since Beijing hosted them in 2008. No Chinese will ever forget that amazing experience.

Since then, China has sought to build people's interest in them by implementing policies aimed at encouraging a healthier lifestyle and engaging everyone to participate more in sports and fitness.

Some recent developments stand out in this respect. Chinese Premier Li Keqiang chaired an executive meeting of the State Council in August 2019 where he announced the state's commitment to supporting fitness and sports consumption. The public's rising demand for both has led to the construction of new sports facilities by the government and private actors alike. This infrastructure will make it easier for Chinese to meet their fitness and sports needs.

Wang Dengfeng, director general of the Department of Sports, Health and Arts under the Ministry of Education, told a press conference in December 2020 that "more than 90 percent of primary schools and 93 percent of middle schools across the country had met the standard set for the area of sports venues at school" by the end of 2019.

There were also nearly 600,00 physical education teachers in China's public schools by that time too. Quite clearly, the government is actively engaging with the youth in order to teach them a healthy lifestyle early on in their lives.

Perhaps most importantly, the State Council issued a circular, reported on earlier this month, which set the target of 38.5 percent of the Chinese population participating in regular physical activity by 2025 as part of the 14th Five-Year Plan (2021-2025). According to Xinhua, the means to this end include stepping up development of public sports venues and facilities, hosting more public sports games and competitions, and advancing high-quality development of the sports industry, among others.

With these developments in mind, one can better understand the true importance of the Olympics in contemporary Chinese society. Winning gold medals will always be important, but of even greater significance for the country is that the Games inspire society and especially the youth to live healthier lifestyles and participate more in sports.

Modern society has taken mankind down the path of a much less physically active lifestyle due to rapid technological advancements, but the public's health has suffered because of it.

China is focused on improving the quality of life for everyone and is therefore sensitive to the long-term health risks inherent with this emerging lifestyle. That's why it's doing its utmost to meet society's growing demand for more physical education programs and facilities to train in.

This trend was directly inspired by China's hosting of the 2008 Olympic Games and continues to this day. For that reason, while winning gold medals will always be important, the Olympics' most lasting legacy is its positive influence in the Chinese society.