OPINIONS The pig as universal archetype of optimism

The pig as universal archetype of optimism 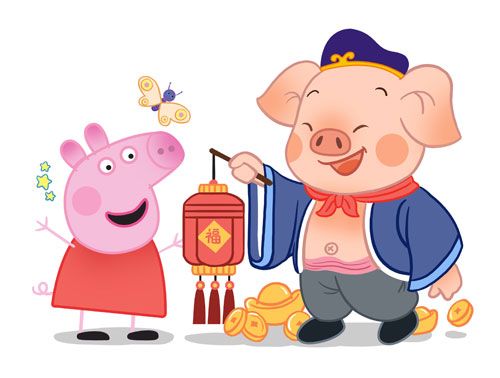 Peppa Pig, the adorable cartoon series that originated in Britain, has grabbed the attention of Americans and Chinese alike. The preschool television show features a piglet and her jolly family and friends. And aren't they cute and memorable!

Yet the reasons why the show is so popular across the Pacific may slightly differ according to local customs and, yes, mythology. For example, Americans love Peppa's churlish British accent. They don't like Peppa's bicycling without a helmet and her constant fat-shaming her father, Daddy Pig.

Chinese audiences don't mind Peppa's temper tantrums. That's because in China a pig gets away with far more complex character script thanks to the most famous pig of them all: Zhu Bajie from The Journey to the West.

Peppa Pig, or Peiqi as she is spelled in China, lives in a tiny house on a steep, steep hill. The fabled godly general Bajie was expelled from Heaven, reincarnated on Earth, fell into a pig well and came out half-pig, half-man. A comparison between the two is difficult, but not impossible.

Zhu Bajie is a deity. Peppa is a drawing. Kids love Peppa. Parents love Bajie. Bajie may be an immortal, a monstrous porker, yet he's only the sidekick to the Monkey King Sun Wukong, whereas Peppa may look like a two-dimensional pink hair dryer but, at least she has a show named after her.

In detail, Zhu Bajie is greedy but tolerant, lazy but good-hearted. Peppa is sassy and energetic. Bajie, or Pigsy as he is called in America, has a successful animation series Journey to the West under his belly since the early 1980s while Peppa's 2004 debut is novel to world history. And while stout Bajie beats up demon armies in unison with his pals Sun Wukong and Monk San, saucy Peppa frequently quarrels about who is her best friend: Suzie the Sheep, Molly the Mole or perhaps even Zoe the Zebra.

She or shall we say her show's producers try to be international with Peppa by having her eat Italian spaghetti, write to a French pen pal, and celebrate the Chinese New Year. This is why Peppa is shown in 180 countries and territories around the world. Bajie, meanwhile, can lay back and rest on his laurels for being part of world literature since 1590.

Both pigs have cracking weaknesses. Bajie, for example, chases after butterflies and has to carry most of his party's luggage, while Peppa is a sore loser and "unfriends" you in no time. Which brings us to the two extraordinary characters bearing extraordinary meaning in East and West during the Year of the Pig in 2019.

In ancient Greece, the pig stood for fertility and lucky charm. The wild boar was the sacred animal of the Germanic tribes, including the Anglo-Saxons. Whoever owned a pig, had, in the eyes of his neighbors, plenty to eat.

Every year on New Year's Day, Europeans gift each other small figures of a smiling sow, a bunch of piglets or a pig with a coin under its trunk. They also sometimes make pig-shaped cookies from yeast dough.

In China, the pig is the 12th animal in the Chinese Zodiac calendar, considered the most auspicious creature after the mighty dragon. Linguistically, the pig is glorious. Having a pig is colloquial German for "Lucky you!" In Chinese writing, a pig under a roof means prosperity, means family (jia). Everyone (dajia) literally means big house with a pig.

Peppa and Bajie are also excellent language teachers. In case you are not familiar with preschool education these days, those shiny and very pink fellows disseminate English and Chinese languages to millions of eager learners. Little Fox, a Chinese language education company, teaches Duiwai Hanyu through The Journey to the West.

And Peppa in its original is used by Chinese pupils to practice their English comprehension skills, which is a lot of fun thanks to the many singsongs, laughter and animal noises. It's a win-win piggy, and why not.

Peppa and Bajie are universal archetypes of optimism, prosperity and good luck. And that's part of the reason adults are tuning in their kids for a bright and hopeful future of plenty.

The author is a German writer and cultural critic.