OPINIONS The potential impact of the Trump impeachment articles

The potential impact of the Trump impeachment articles 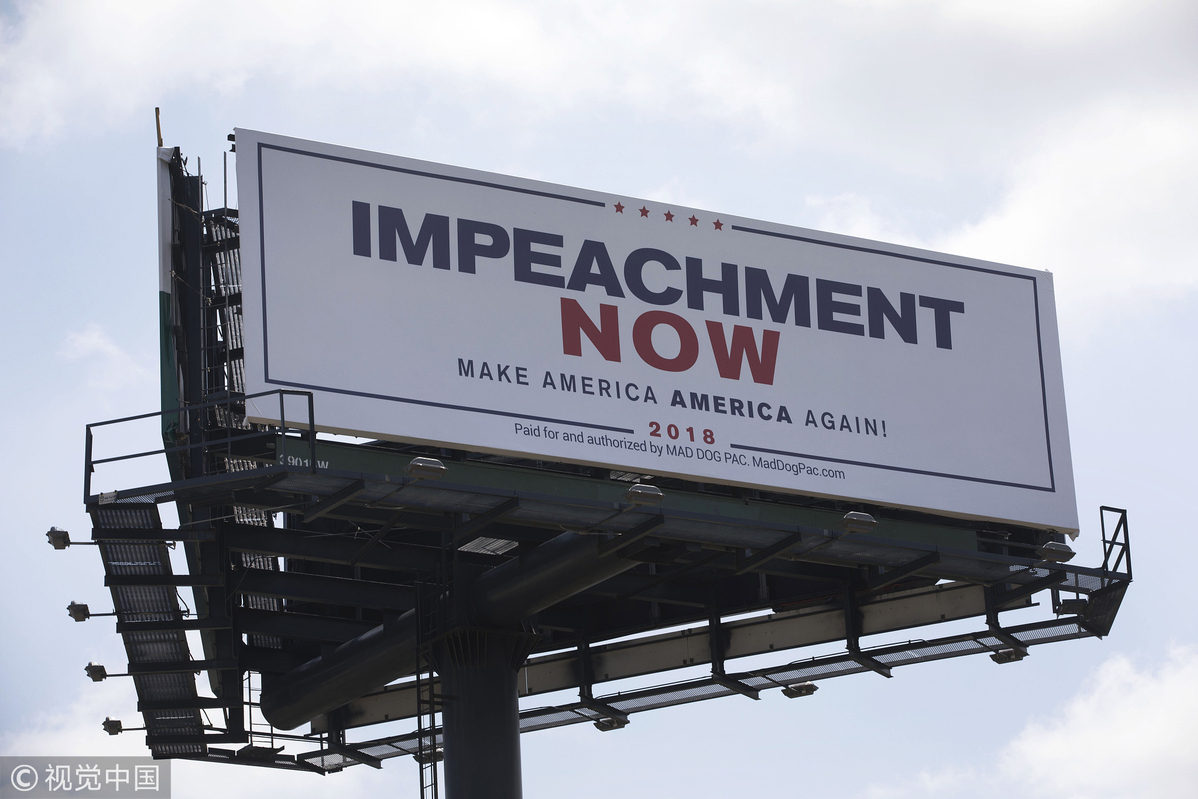 Editor's note: Sun Chenghao is an assistant research professor at the Institute of American Studies, China Institutes of Contemporary International Relations. The article reflects the author's opinions, not necessarily the views of CGTN.

After releasing two proposed articles of impeachment against US President Donald Trump, the House Judiciary Committee will ready for a debate and a vote on whether to make a recommendation to the full House this week. If the articles are approved, a final vote is expected in the House next week. This carries the implication that Trump might become the third president in the American history to be impeached.

The first article charges Trump with abuse of power and accuses him of pressuring Ukraine to investigate his political rival Joe Biden by threatening to withhold the 391 million US dollars' of military assistance to the country.

The second one is obstruction of Congress since Trump directed officials in the executive branch not to comply with the House subpoenas.

Both abuse of power and obstruction of Congress are relatively broader charges, rather than specific crimes such as bribery. However, the two articles would invite more debates from both sides of the aisle in Congress, adding a layer of legal disputes to the current partisan fights.

On abuse of power, Trump and his Republican supporters said there was no "quid pro quo" between the administration and Ukraine while Democrats believe that, based on the current and former White House officials' testimony, there was a direct link between withholding the US military aid to Ukraine and Trump's requirement of an investigation of Joe Biden. But from the legal perspective, the testimonies are not first-hand information and offered no solid evidence on the possible trade, especially considering Trump eventually released the military and security assistance to Ukraine.

On the second article, the Democrats are using the same strategy in the impeachment proceedings against former US presidents Richard Nixon and Bill Clinton which stipulates that defying a congressional inquiry is itself an impeachable offense. In fact, the different interpretations of the Constitution have given risen to disagreements over how to understand "separation of powers."

The Democrats believed that when it comes to impeachment inquiries, the president is not entitled to ignore or disregard the House's authority. But the president and the Republicans clearly do not see it that way.

Democrats understand that it is almost impossible to convict Trump in the Senate, and they are accelerating the process to complete the vote in the House by Christmas. Democrats are also fearing that the long impeachment process will backfire and anti-Trump sentiment will serve as a double-edged sword for Democrats when the public start to become tired of the impeachment publicity when there is no evidence to support the impeachment argument.

However, the two parties' preoccupation with the impeachment proceedings happens at a time when what voters need the most are positive stories about how their life could be improved. Barack Obama's success in the 2008 US presidential election is due to his slogan of "Change We Can Believe In" instead of throwing dirt on his political competitors.

The impeachment process will undoubtedly intensify the partisan fights against the backdrop of the upcoming presidential election. Even if more evidence is disclosed, it is too difficult for the two parties to reach a consensus on impeachment and the partisan line will only become clearer.

Another fundamental impact of the impeachment under such atmosphere is that the impeachment could become a new type of weapon in America's internal political struggle – consequently, due process based on the US Constitution will be undermined.

In the past cases where former Presidents Nixon and Clinton were impeached, both parties faithfully and cautiously abided by the rules of impeachment spelled out by the Constitution. But now, it seems that both parties are treating impeachment as an important political tool to fight against each other.