OPINIONS The source of Hong Kong's problems lies in Washington

The source of Hong Kong's problems lies in Washington 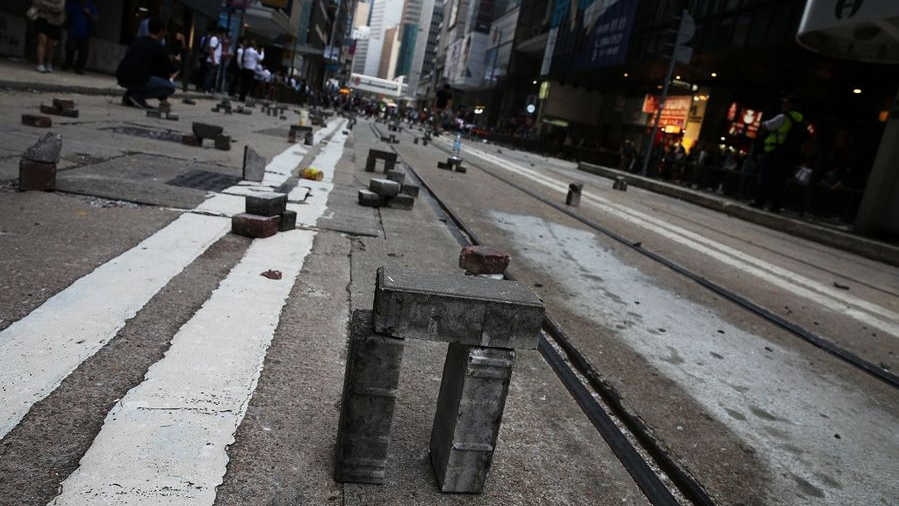 While President Trump maintains a guarded silence on the violence in Hong Kong, and is getting hit by much of the conservative press for his not speaking out "in support of" the bomb-throwers on Hong Kong streets, many of his underlings are playing these provocations to the hilt, just stopping short of breaking with the President's hope that this all will end peacefully.

Vice President Mike Pence was out in front of this US "rally" for the Hong Kong demonstrators, first in a major China-bashing speech at the Hudson Institute on October 4 and once again on October 24, at the Wilson Center, where Pence lambasted US companies for not being more assertive in their support for Hong Kong.

And Secretary of State Mike Pompeo is also in the process of building up a constituency of anti-China sentiment with an evangelical Christian bias. Forming the Commission on Unalienable Rights in the US State Department was a clear call to make the so-called "human rights agenda" a calling card of US foreign policy.

Now, this is all very pleasing to his evangelical supporters, who are eager to convert the world to THEIR world view, and Pompeo, obviously interested in higher office, is anxious to solidify his support among this important layer in the Republican Party.

But the policy of the United States, a country in which there is a clear separation between Church and State, has never embarked on such overt missionary endeavors, but has tended to work with all powers, regardless of their political or religious beliefs.

This seems to be the orientation of President Trump, who has expressed a clear attempt to work with everyone for the good of the United States, including China and Russia.

But Pence and Pompeo are doing an "end-run" around the President on this issue, while he is busy fending off the unconstitutional attempts by the Democrats to unseat him, the duly elected president, whom they simply don't like.

And the House of Representatives, which provided a forum last month for the Hong Kong rabble-rousers have also passed the so-called Hong Kong Democracy and Human Rights Act, a legislation which would allow the US to intrude on the internal affairs of China with regard to Hong Kong, legislation which will most likely be met with a presidential veto.

But the attempt to describe what is happening in Hong Kong as an assertion of the principle of "human rights" really beggars the imagination. Hong Kong was never freer than it is today.

And to hearken back to some "gilded age" under the British protectorate is to ignore the reality of what it was like to live under the British imperial boot. Hong Kong won its freedom, in fact, when it was turned over to China and now enjoys a degree of autonomy that it never previously experienced.

But there are obviously restrictions under the "One Country, Two Systems" formula by which it attained its freedom, and one of which was that Hong Kong would remain a part of China. But the insane protesters who vandalize Hong Kong will have none of it.

Unfortunately, the insanity is spreading, fomented by those same forces from abroad which are quite concerned by the new role that the People's Republic of China is playing internationally.

And most of the hype about Hong Kong's "fight for freedom" is just so much jawboning to cover up the real fear of China as a major power. Because when push comes to shove, nobody in Washington is really concerned about what happens to the delusional "young turks" who are manning the barricades at the Hong Kong Polytechnic University and other schools.

How this will all play out is still not clear. Will China feel the need for intervening with the PLA? Or will the Hong Kong authorities mobilize sufficient force to quell the violent protest themselves? Or will the hyped-up Hong Kong youth's continuing rampage leading to the demise of Hong Kong as a viable entity?

Many are already leaving the city in search of better alternatives elsewhere. But whatever happens, the responsibility for the devastation that has already been wreaked on Hong Kong should be lain at the door of the US Congress and those in the Trump Administration who are intent on sabotaging the President's attempt at forging a solid relationship with China and with Russia.