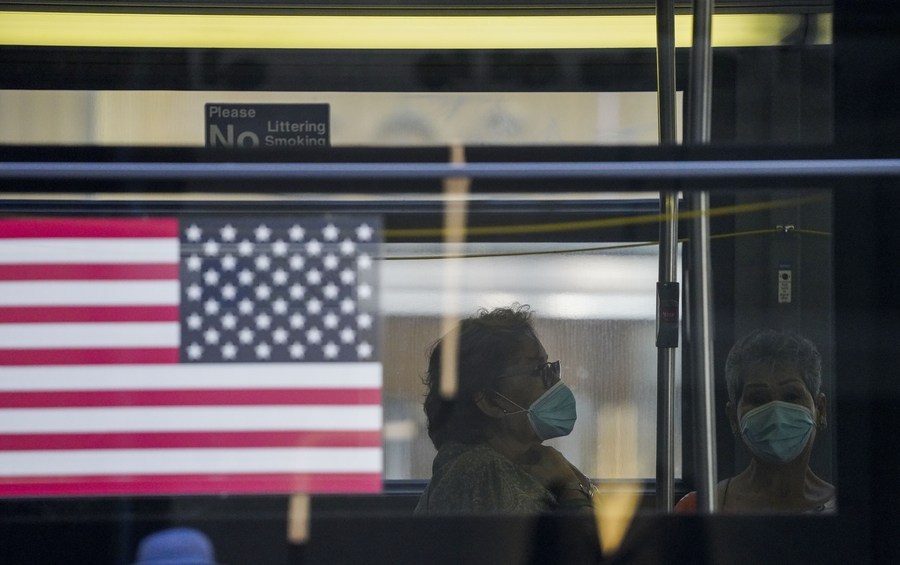 Passengers with face masks are seen in a bus in New York City, the United States, Aug 2, 2021. (Photo: Xinhua)

As of Monday, the United States has reported more than 35 million cumulative COVID-19 cases and over 610,000 deaths, leading the world in both numbers.

The heart-wrenching loss of lives is a reminder that Washington's painful lessons in its response to COVID-19 should be reviewed and learned from, so that humankind can save more lives and prevail over the virus at an early date.

Despite the fact that some US media have glorified the country's image in its fight against COVID-19, facts have shown that the United States is the world's number one anti-pandemic failure, the country that is witnessing the most political fingerpointing, and the country where the most disinformation prevails, as was pointed out by a research report on Monday by three think tanks in Beijing.

The truth about the US response is that some unscrupulous politicians in Washington care more about partisan interests than ordinary American lives.

In early 2020, then US President Donald Trump's administration ignored warnings of the virus and downplayed the risks of the pandemic in a bid to buttress economic growth and stabilize the Republican base in elections.

Hindered by partisan conflicts, the pandemic prevention and control system malfunctioned, and the country missed the window of opportunity to implement effective measures at multiple development stages of the pandemic.

The United States' notorious money politics has also been at play during the pandemic, resulting in the importance of capital outweighing that of human lives in the eyes of the government.

After the pandemic broke out, the country released trillions of US dollars in new money, leading to a continuous rise in the stock market. According to Forbes, from March 2020 to January 2021, the combined wealth of more than 600 US billionaires rose by 38.6 percent.

Vulnerable groups were the victims of the government's slack response. Dan Patrick, lieutenant governor of Texas, said that grandparents like him are "willing" to die to save the economy for their grandchildren.

Another truth is that while politicians in Washington chant "all men are created equal," US society is seeing heightening discrimination and injustice.

The failed US response to COVID-19 has intensified racial conflicts, reflected in the mounting attacks and discrimination against Asians, and surging number of shootings in the country.

An article published by The Atlantic in October said that the level of trust in the United States, in its institutions, politics, and of citizens in one another "are in precipitous decline."

"Americans looked to their governing institutions to keep them safe. And nearly every one of their institutions betrayed them," it said.

To make matters worse, the US government has used the pandemic as a pretext to serve its own political agenda, and in this process has suppressed scientists and professional opinions.

While creating absurd claims about virus origins to stigmatize certain countries, the US government has remained quiet about questions concerning suspected US infections in late 2019.

The United States is averaging more than 100,000 new COVID-19 cases daily for the first time since February, and that reveals the real picture of the US anti-pandemic fight. US National Institutes of Health Director Francis Collins said the country is "failing" to contain the Delta variant surge, and "now we're paying the terrible price."

As American people are still fighting the pandemic, it is hoped that Washington will face the stark reality of its anti-pandemic debacle, and take actions to protect more lives in America, and in doing so, contribute to, instead of hindering, the global fight against the pandemic.