OPINIONS The United States is feeding the world with "poison pills"

The United States is feeding the world with "poison pills" 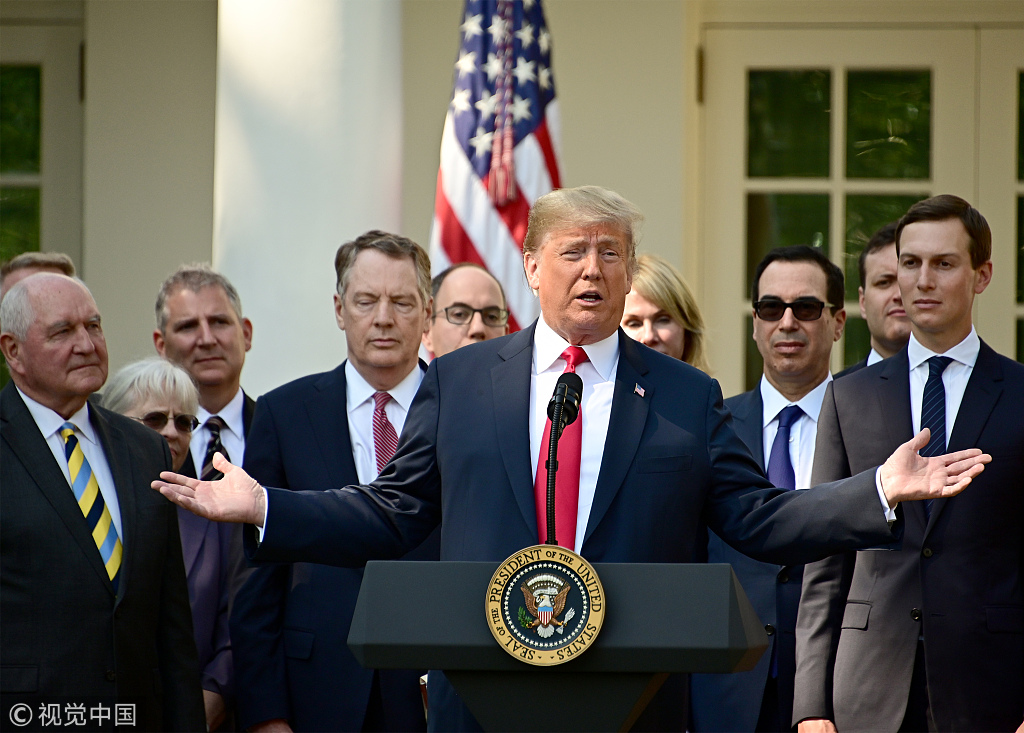 However, the recently concluded US, Mexico and Canada Agreement, now known as the USMCA, does not reduce Canada's dependence on the US market, and instead has put limits on Canada to negotiate trade agreements with other trading countries. According to Article 32 of the Agreement: "Entry by any Party into a free trade agreement with a non-market country, shall allow the other Parties to terminate this Agreement on six-month notice and replace this Agreement with an agreement as between them (bilateral agreement)." This clause is widely interpreted as targeting China. Britain's Financial Times has written that "In fact, a number of provisions in the USMCA deal are squarely aimed at containing China, and making sure Canada and Mexico do the same."

US Commerce Secretary Wilbur Ross has called Article 32 a "Poison Pill" clause, and says the US side wants to put a copy of this clause into future free trade deals between the US and other countries, including Japan, the European Union and a post-Brexit UK. But through this, can the United States succeed in establishing an exclusive trading system to isolate China?

First of all, this agreement by the United States with the "poison pill" is neither free nor fair, but an unequal treaty under the dominance of the "America first" principle. Washington has deprived Canada and Mexico of its sovereignty and freedom by virtue of its position as a domineering trade power. But the "poison pill" clause is not so easy to "swallow."

In response to the new agreement, Canadian Chamber of Commerce President Perrin Beatty said "Canada must remember the lesson this turbulent period has provided: we must never again allow ourselves to be overly-dependent upon one trading partner. We must continue to diversify our markets to protect ourselves from capricious and unfair actions in the future." A Canadian lawyer has bluntly said: "They are effectively saying 'We are going to control North America.' "I cannot believe Canada would sign this. It makes me want to puke."

Under pressure, Canadian Foreign Minister Chrystia Freeland recently told Chinese State Councilor and Foreign Minister Wang Yi that the Canadian side will promote the negotiation of free trade agreements with other countries based on its own conditions. She also says the Canadian side hopes to continue upholding the rules-based multilateral trading system with all countries, including China, and opposes trade protectionism. Freeland further says the Canadian side hopes to strengthen strategic partnerships and expand exchanges and cooperation in various fields with the Chinese side.

Will the United States' other trading partners accept the US "poison pill" clause? The United States has publicly pressured Japan for concessions. US Commerce Secretary Wilbur Ross has called on Japan to take steps to "move manufacturing into the U.S." to cut its 40 billion-dollar automotive trade surplus with the United States. When US Secretary of Agriculture Sonny Perdue recently asked Japan to open up its agricultural market, he bluntly pointed out that the United States has long been protecting Japan. After World War II, the United States has continued to station roughly 50,000 soldiers in Japan. Washington seems to be suggesting that it's time Japan start paying protection fees.

Undoubtedly, these requirements, together with the "poison pill" clause, will put Japan in a dilemma. After all, China is Japan's largest export market. It is no wonder that Donald Tusk, President of the European Council, once suggested that "Looking at the latest decisions of President Trump, someone could even think with friends like that, who needs enemies."

As an important force in the international community and after the United States decided to withdraw from the Iran nuclear deal, the EU chose to unite with Russia and China to set up a "special purpose vehicle" to avoid US sanctions and maintain normal trade between the international community and Iran. French President Emmanuel Macron not long ago announced at the UN General Assembly that France will no longer accept "commercial agreements" with countries that do not "respect" the Paris climate accord, a clear shot at the United States, which is the only country that has announced its withdrawal from the accord after first joining it.

It is conceivable that the EU is unlikely to sacrifice its sovereign independence and freedom to swallow the US "poison pill" and establish a "devil agreement" with the United States. As Professor Anne Krueger with Johns Hopkins University said, "Most important, other governments will now have to ask themselves why they should negotiate with a country that tears up settled agreements at will."

China's economic growth model is undergoing a transformation to promote the quality of economic growth by raising the level of national consumption. It is predicted that China's overall consumer market could remain level with the United States this year and even surpass the US to become the world's number one. China is also expected to continue to be the largest trading partner for more than 120 countries and regions around the world.

The reason is simple. No economy in the world is willing to give up the opportunity to trade with China. For example, BMW has announced that it will invest 3 billion euros in the Chinese market. Exxon Mobil has discussed an agreement to invest 10 billion US dollars in China. Tesla plans to open its first overseas super factory in Shanghai, designed to produce 500,000 electric vehicles annually. Only those who are paranoid would self-righteously believe that an exclusive trading system based on an "either you or me" philosophy can be established to isolate China.

People have seen that despite the alliance with Washington, Ottawa is more aggressively expanding its trade market outside the United States, especially the Chinese market. According to the Canadian think tank Public Policy Forum, "Diversification has now gone from buzzword to basic necessity for our trade-based economy... But a diversification strategy that doesn't fully include China, the second-largest economy in the world and the biggest purchaser of much of what Canada produces, defies logic and math. It's bound to produce another failure." To this end, the group has made recommendations as to how to avoid the "poison pill" clause to strengthen cooperation with specific industries in China.

China advocates and practices the principle of "win-win cooperation," while the United States promotes "America first" and a "zero-sum game." It is self-evident what kind of rules the world should follow. In bilateral relations, the United States may be able to bully other countries by its power, but it cannot prevent normal and justified trade decisions and diplomatic choices made by other countries.

Based on an edited translation of a commentary from the Chinese-language "Commentaries on International Affairs."