The United States is taking its trade hegemony to the extreme 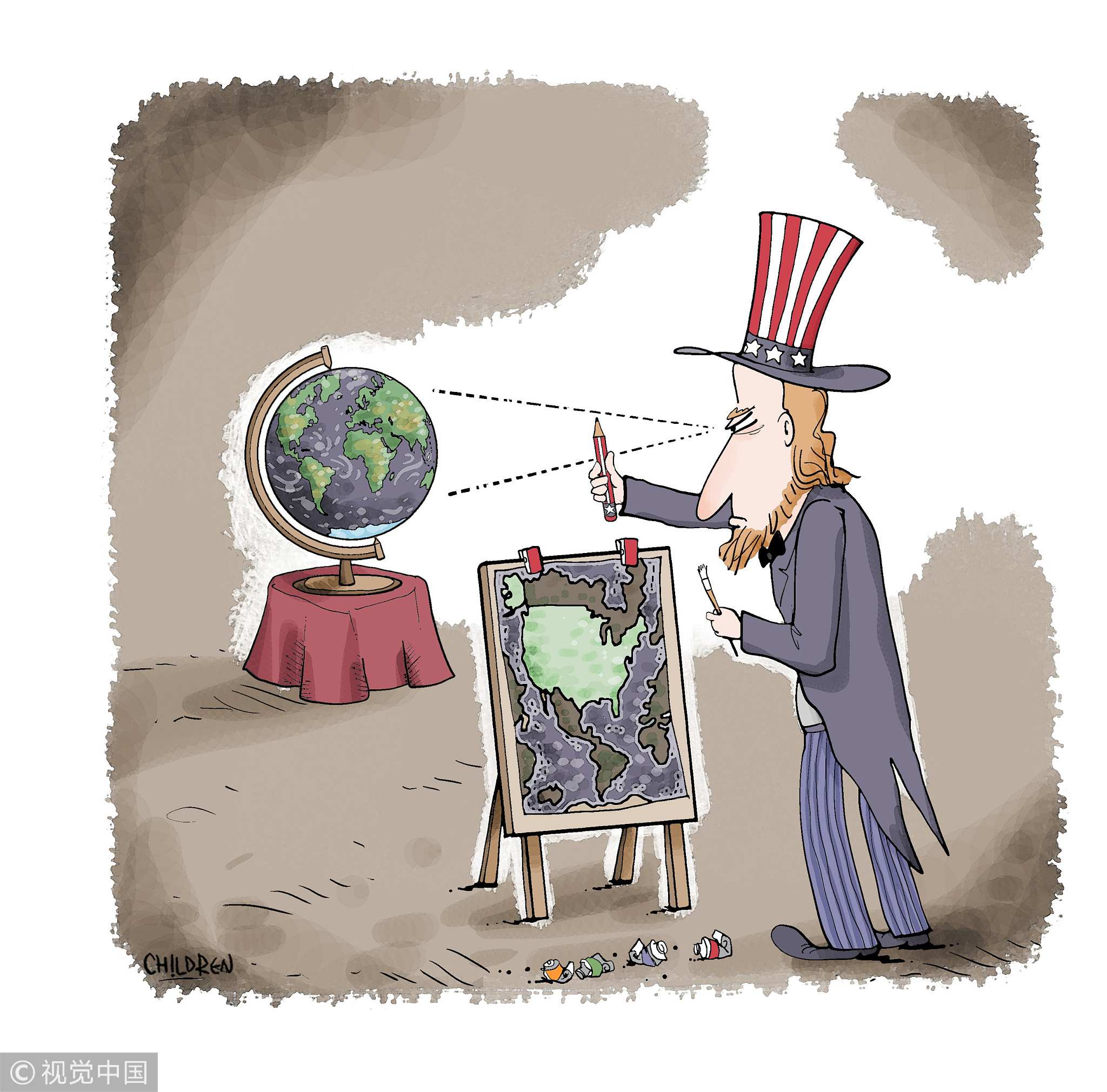 The cartoon shows the world through the eyes of the US. (Photo: VCG)

In light of the trade war, which was provoked by the US, the spokesman of China's Ministry of Commerce said at a news conference on July 5 that although China does not intend to take part in the trade war, we will have to fight back when it becomes necessary, in order to maintain the interests of the country and the people.

"China will never pull the trigger first. But if the US implements its tariff imposition measures, China will be forced to take countermeasures", said the spokesman.

Obviously, the purpose of the US trade war against China is not just to reduce the trade deficit with China and achieve a Sino-US trade balance, but also to prevent China from upgrading itself to a manufacturing power.

The US hopes that through trade bullying, it will force China to succumb and become the economic vassal, just like Japan in the 1990s.

Based on ideological and geopolitical factors, if China bows to US pressure like Japan did, it will not only find it difficult to maintain its economy, but it is also more likely to encounter the same dilemmas faced in Latin America.

Since mid-June, the tone and signals coming out of the White House to China have been severe. The repeated escalation of Trump’s intended trade war with China, in addition to the pressure from both parties in Congress, are also taking a consistently tough stance toward China.

White House trade consultant and the famous hawk Navarro published a report on China’s “economic aggression” on June 19, arguing that China becoming the world’s second-largest economy was achieved through “aggressive bills, policies, and practices." Coincidentally, US Secretary of State Mike Pompeo also stressed one day earlier that the Chinese economy is "predatory."

This is terrible logic. President Trump, trade adviser Navarro, Secretary of State Pompeo, and US trade representative Robert Lighthizer all believe that the US has been plundered by China and regards itself to be a "victim".

However, for China and the world, the US has taken trade unilateralism and its hegemony to the extreme. The differences in China's and the US' trade positions, as well as those of the world and the US, have made it so that trade wars seem inevitable.

This is also the reason for the eventual lapse of Sino-US trade consultations. It is also the main reason why Trump and the leaders of the six Western countries came to very different conclusions at the G7 summit.

Whether it is the Sino-US trade war, or the US-European steel-aluminum tariff friction, or Trump's constant "retreat" from the international community, the world's criticism and accusations against the US has made little difference to Trump and his administration.

It operates to the standard of "America First" and, more importantly, works from the basis of Trump's paranoid belief that the US has been the victim of the multilateral mechanisms of global trade. Regardless of if the country in question is China, the EU, Canada or Japan, trade with the US is thought to be unfair.

This is also why other trade bodies, including China, have difficulty in reaching a compromise with the US via standard trade negotiations and the rule-based multilateral mechanism for global trade. Therefore, China's only option is to fight back, and the EU and Canada, like China, have begun their own fight back against the US also.

Of course, whether the trade war between the US and Europe, and the US and Canada will take place is still unknown, but China will obviously not succumb to the US trade pressure.

On one hand, in the three rounds of trade consultations between the US and China, China has made significant qualitative and quantitative concessions. The lack of appreciation from the US not only damages China’s goodwill but has also made China lose trust and confidence in the Trump administration.

Like the US, China has also spoke out against the trade compromises made with the US. The US' trade war against China has escalated beyond the expected limits. The results of previous trade consultations have been dashed, and China has launched a "trade self-defense counterattack" against the US in a comprehensive manner.

On the other hand, the tax increase of hundreds of billions of US dollars that the US has imposed on China is actually impossible to pay. If it remains in place, it means that nearly 80 percent of China’s exports to the US will be taxed. The impact it will have on American consumers is obvious.

The Sino-US trade issues are not a local battle, but a global war and if it continues, both China and the US will lose, and the world will also suffer greatly.

But the outlook is still frustrating, and a positive outlook will depend on whether Trump and his economic aides can change their “victim” mentality.